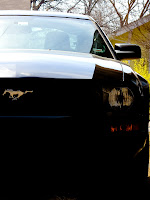 I have lost count of the amount of times someone on the street has looked at Dad’s Mustang and make some kind of positive remark about it.  It’s six years old but it still turns heads.  I always respond with a thank you and often tag a, “It was my father’s” which gets no response.  That’s fine.  I don’t know why I do it.  It’s not like I want strangers to pry into my personal life.  It’s not any of their business.  But I thought to myself, what would I say if someone actually asked?

When I looked at the house I live in, the guy showing it to me asked about my moving situation.  I told him that, among other hassles at my old apartment, I needed more space due to some items I’m inheriting from my late father.  He said he was sorry to hear that.  Really, was it necessary for me to mention that my father had just passed away?

There is a trend here.

I have a typed list of people.  Friends, acquaintances, family.  All people that have stepped outside the normal “So sorry to hear about your Dad” and offered their ear or stepped out in some other way to show their support.  I have ways to contact all of them.  But I don’t.  Part of me feels like I should be able to maintain now, and not be the hum drum guy.  Part of me also says, “Hey, chump, it hasn’t even been two months yet.”  It’s that battle that grapples with me most of the time.

I was driving home tonight, mostly on autopilot.  The speedometer has some issues, and I made a mental note to get Dad’s instrument cluster repaired.  I just had a moment, like a cast had cracked and fallen off of a limb. I realized this isn’t Dad’s car anymore.  It’s my car.  Dad’s not going to call and say, “Alright, I need it back now.”  Of course I know that.  But part of me doesn’t buy it, still.  I don’t cry as much as I used to; it’s replaced with a feeling like the light bulb burned out suddenly and I can’t see to replace it…I just gotta wait for the sunrise.

I have identified this aching need to tell people about my father, and how I’m feeling, and just an overall desire to reach out to people…but I feel paralyzed.  I feel like SUCH a burden and I don’t know why.  I have another appointment with my grief counselor next week and I can address that.

Until then, though, I can roll the windows down, blast Deep Purple and Steppenwolf, and remember the face of my father.