As predicted, I woke up this morning in much better spirits.  Last night, I found myself in a place where I didn’t want cheering up, but I did, and amidst the confusion I decided to reach out.  I spent a little over an hour with my good friends Leah and Darci, having a beer and just talking.  I came back home tired and vented; I awoke this morning with a smile.

Though I had no energy; I didn’t run today.  I only went once this week.  Yipe.

When I’m feeling good, it’s all smiles.  I launched one of my streaming electronic music channels, turned it up, piped it through the kitchen, and danced about.  I fixed tea and a quick breakfast.  I took a shower.  I started my chores.  I’ve been interacting with people all morning and it feels great.  Ever since I came home from Dragon*Con, I feel like I’ve been waking up.  Getting back to where I once belonged.  Bumps along the road are still expected, but I tell you they are so much fewer and far between.  Even my nightmares have reduced in quantity.

I write when moved.  The strongest emotions I’ve felt overall in the last year have been grief and sadness; I need an outlet for that emotion and writing has been my primary tool for that.  Things right now are terrific.  I write, but it’s not public consumption writing.  It’s been wonderful to be full of emotion on the other side of the spectrum.  An unexpected pleasure, to be sure. 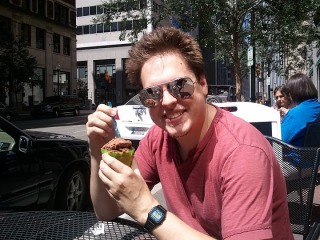