I started writing this on 10 November.  Tonight I did what I do just about every Thursday, which is watch a few episodes of The West Wing with my neighbor, Amanda.  One of the episodes tonight revolved around a main character’s father battling Alzheimer’s and the feeling of loss that accompanies such a devastating illness.  When these thoughts are finally posted to the world, it will have been one year since my father passed on.  Twelve months.  Goodness.  That’s hard to believe.  The reason I started writing tonight is because tonight I realized that media (be it books, movies, what have you) that deals with father issues has a greater impact on me emotionally.  I sit there and pretend it doesn’t affect me as much as it used to.  I still haven’t watched Big Fish again.  I know it will destroy me.  Field of Dreams is a no-go for a while too, while we’re at it. 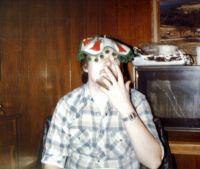 Now it’s 2 December.  After hemming and hawing, I decided to buy a six foot Christmas tree.  I’ll be hosting a few gatherings here for the holidays, and a Christmas party without a tree would be sad.  We always had fake trees growing up; I didn’t have a real tree until Indi and I started dating.  When she learned I’d never had a real tree, she went nuts and insisted.  It was nice the once, but too much of a mess to do on a regular basis for my taste.  I set the tree up last night and decided today would be good to ornament it.  I thought I had Grandma Gail’s old ornaments, but it turns out I had Dad’s.  I filled with bittersweet memories as I looked through the box and the small packages of intense memory.  Decorating the tree was always a Rhys ‘n Tyler job at Christmas, and every piece of glass and grocery-related Season’s Greetings carried dense memory.  I really miss Dad today, even though he wasn’t a big fan of Christmas.  He wasn’t a big holiday guy at all, in fact.  When I stayed with him during Grandma’s funeral, he sat at home watching old home movies of Christmas Past when us boys were young.  I got the impression that happened very frequently.

18 December.  Took a road trip yesterday with a friend.  There’s an abandoned mining town in northeastern Oklahoma and I wanted to take my new camera out for a spin.  We worked in a bit of a road trip and found ourselves near Pawhuska.  I decided to stop and see Dad’s marker for the first time in person.  Kneeling there on the hillside of the cemetery, I looked at his name etched into the stone laid in front of me.  There’s something so final about that.  Something that doesn’t really hit you with a picture.  I miss him so much.  That won’t ever get better, I think.  I just grow more used to his absence.  His contact is still in my cell phone.  I’m starting to entertain thoughts of removing it.  Every time I scroll past it, I want to stop.  A drop of water on my forehead.
27 December.  Put away the Christmas decorations today.  It was a good Christmas.  Spent a day with friends, a day with family.  Nobody mentioned Dad, but we all felt his absence.  The tree was decorated with sparse ornamentation; one of his old Campbell’s Soup ornaments crashed and shattered on the floor as I was putting it away.  I saw it go.  It slowly rolled out of my grip and descended to the wood slats below.  I was powerless.  I heard it shatter and my hand flew up to my mouth.  I just stared at it, hand still covering my mouth, for a good minute.  I held my breath.  It was done.  I apologized aloud to Dad as I went to the kitchen, got a broom, and cleaned it up.  It was a resigned feeling.  I know more things will go with time.  Nothing lasts forever.  Even my memories will fade and, eventually, break in some fashion.  That’s a hard reality to face.

16 January.  Two days.  They weren’t sure when Dad actually passed away and said it could have been as early as Sunday.  I’m doing the same thing this year that I did last year on this day, which is march in the Martin Luther King Jr. Parade here in Tulsa.  I have some pictures from the event.  It was cold, but I enjoyed being a part of the festivities.  It’s strange to look back and think that my world was about to completely change; HAD changed already, I just didn’t know it.  I wish I could reach back and warn myself.  Hey, why hasn’t Dad called you back?  Maybe you should have your aunt or uncle check on him.  He always returns your calls and it’s been about a day since you tried calling him.  That nagging thought in your head should really be attended to; it’s more important than you can ever imagine.
17 January.  The calendar says tomorrow (as the 18th is one year) but I got the call the Tuesday after MLK Jr Day…so today feels more real.  Wherever you are, Tony, know that your son is proud to have you as a father.  As I’ve said before, I know how lucky I am that we were so close and we had a lot of good times together.  Still, I fight anger and bitterness that many people get twice as much time with their Dad as I did.  It’s so damned unfair…but as you told me on multiple occasions there are only two kinds of fair:  state and county.  Every time I think of you, I try to smile and not dwell in sorrow.  Every time I see my brother, I try to encourage him and help give him guidance, for he had even less time with you than I did.  Every time I encounter a challenge at work, I ask myself how you would do it.  Every time I hug Mom, I hug her for both of us.
I try to live up to the values that you instilled in me.  I work to make you proud.  I love you and miss you more than any word could express.