It’s popular to hate the Titanic.  Not the ship itself or the historical account of the disaster on April 14, 1912…but the 1997 Hollywood epic motion picture.  So popular, in fact, that it’s not a film I often quote when talking about my favorite movies because I know it’s inviting a conversation of defense.  However, I am indeed a big fan of the picture, and there are many reasons why. 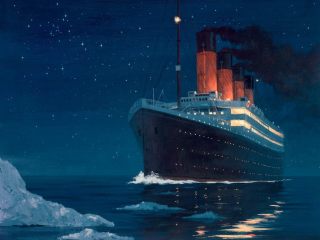 Whenever folks think about Titanic, most people think of the romantic story between Leonardo DiCaprio and Kate Winslet.  It’s a familiar construct that recalls the star-crossed story of Romeo and Juliet.  I’m not a big romantic movie fan; although I do enjoy many aspects of that piece of the film, it’s not the big draw for me.  The big draw for me are all of the supporting characters, the ones that really existed in history, and the character of the ship itself.

I became fascinated by the Titanic maritime disaster when I first learned about it, which had to be around 1995.  I wrote papers and did my own studying before the Internet existed as it does today.  An adventure game was released for the computer in ’96 and I devoured it.  I loved seeing the settings I’d read about and seen in the classic ’50s films in fully-realized computer graphics.  I got to interact with the environment and have a part in a story that carried the foreshadowing of knowing how the story ended, but not how we got there.

The film, of course, took those emotions and my sense of wonderment to a completely new level.  I knew how historically accurate the sets were because I knew what the ship had looked like.  I knew the names of the players and, of course, I knew the ship sank.  But that’s not the point of this movie.  It’s knowing the ship is going to sink and having that color the story beforehand.  It’s also a commentary on the social class structure of the time and a look at the world before the horrors of the first World War reached out and changed everything.

I understand why some folks don’t like the movie.  That’s perfectly fine; I totally get it.  But right now, I’m curled up on my couch with a cup of coffee while the new Blu-Ray plays in the background.  It’s a great way to spend a cold Saturday morning.  Even if my eyes water a little just at the special features…