When I had the opportunity to buy tickets to finally see Arcade Fire in concert, I didn’t care that I would need to drive.  I’d been to Dallas for a concert before (my first arena concert:  Foo Fighters on their Echoes, Silence, Patience, and Grace tour) so another drive wouldn’t be a big deal.  I had a choice between Kansas City and St. Louis; since I’d seen KC before, I decided on the Gateway to the West.  It wasn’t until after this decision was made did I realize that my friends Leah and Darci were going to the same show AND Route 66 ran all the way to and through it.  Instead of just driving to the show, I decided to make an extended weekend of it! 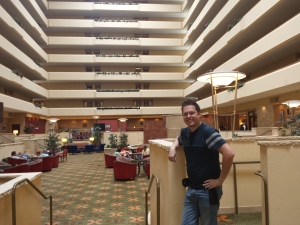 Samantha and I left on Friday, deliberately meandering up Route 66 on the way.  I’d seen the Mother Road up to the Oklahoma Border, but I had spent no time on the Missouri side.  Once we arrived in Springfield, we hopped off the fast-but-boring I-44 corridor and onto the old byway.  This also afforded an opportunity I hadn’t had for many years:  looking around at a very familiar place I visited annually as a child.  My first destination was an old Steak ‘n Shake built in the early 60s (also called the Takhomasak); I remembered it because it was just down the street from a hotel I’d stayed like clockwork during my childhood.  I’ve mentioned before about the ‘Food Show’ conventions our family went to every year; two blocks away from the aforementioned burger joint, the hotel still stands.  I walked into the lobby and was immediately transported to my childhood.  It hadn’t changed much over the years.  I was filled with memories of room service and echoes of lobby conversation mixed with the fountain.  I sent a picture to my mother and she said she could hear the echoing voices of me and my brother in the pool.  It was a special moment.

We drove east, stopping at various points whenever I saw an abandoned building or sign that appealed to me.  We rounded a corner after we’d passed Lebanon, MO and an old rusty three-span truss bridge suddenly appeared.  Sam swears I literally squealed with glee; I don’t know about that, but I DO know that I pulled off the road and spent about 15 minutes taking pictures at street level and from below the old span.  We arrived in St. Louis just before sunset and stopped by the famous Ted Drewes Frozen Custard stand, another Route 66 landmark.  A biker dude took a picture of us before finishing his ice cream and riding off on his Harley.  Our hotel turned out to be right next door to the Arch.  Downtown STL was bustling, thanks to a Cardinals game, a hockey championship game, and an international robotics competition.  I had enough drive time for one day, so dinner needed to be within walking distance.  We looked around and eventually found ourselves about two blocks away from the hubbub at a small diner called the Eat Rite.

This place felt like a direct transplant from the 1940s.  It consisted of a small lunch counter with a dozen stools, an ancient pinball machine that mentioned “No Payouts” and a cigarette vending machine that may or may not have been operational.  It was completely empty besides the two of us…and that included any staff.  After a few minutes, a middle aged gentleman walked in from the back (after placing his cigarette on a perch in the back doorway.)  He took our order (I had breakfast, Sam a BLT) and cooked our food without as much as four words.  After serving us, he walked back outside. 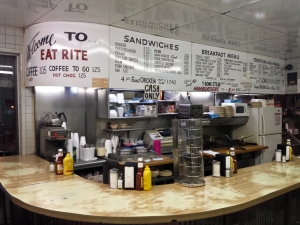 Sam and I chat for a few minutes as we ate, and at about the halfway mark this guy walks back inside, looking at me as he once again stowed a cigarette and shuffled towards the bend in the counter where we sat.  I wasn’t sure what was going to happen when he arrived; he said nothing.  I sat for a moment before venturing, “It’s good!”  He smiled; the stone surly exterior broke a little and he thanked me with a smile.  Although conversation never picked up, he did engage a little more before we paid our check (which also echoed the diner’s roots; dirt cheap and cash only) and went back to the hotel.

Tomorrow I’ll write about the weekend proper, which brought more sight-seeing, meeting up with our friends, and,eventually, the concert that brought us north in the first place.