After spending about eight hours on the road on Friday, I expected to sleep in on Saturday morning.  Although I did sleep longer than normal, it still wasn’t “sleeping in” by anyone’s standards I reckon.  Lazy mornings cannot compete with the excitement of a new city.  Although we did rise too late to partake in one of the local Farmer’s Markets that Leah and Darci had invited us to, we were still able to get out and about before the streets were terribly packed with people.  Our hotel was literally next door to the famous Gateway Arch, so we started our day there. 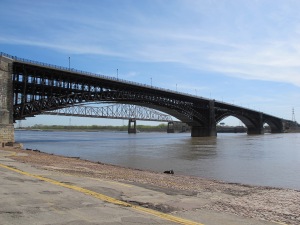 The park surrounding the arch is beautiful.  There were still spring blooms on the trees, yet the grass was already lush and fully green.  A small pond next to the arch provided a lovely reflection of the stainless steel structure.  I wandered around and under it, gaping at the height.  Tourists can go into the arch itself and look out on the city from an observation area, but I don’t do too well with heights.  Just north of the arch is the Eads Bridge, a gorgeous arch bridge (once the longest in the world) that spans the Mississippi River.  Just north of THAT is the Martin Luther King bridge, which reminded me of Roosevelt Island in New York.  I had a wonderful time walking through the park and marveling at these constructions.  The next place I wanted to visit was also a bridge, but it was a fair distance away.  With Google Maps as my guide, we drove north to the Chain of Rocks bridge.

As we drove, I was taken aback at the deterioration throughout the city.  I don’t know how many homes and apartments I looked at and couldn’t determine whether they were abandoned or not.  The dilapidation that exists throughout St. Louis is staggering.  Most of the buildings were brick, and more windows were boarded up than not.  It was the first time in a long time I found myself feeling fearful of my surroundings.  One decaying building can be beautiful; an entire neighborhood full of them can be dangerous.

The Chain of Rocks bridge exceeded my expectations.  It’s a mile long and was converted to a pedestrian bridge a while back, but once carried Route 66 across the Mississippi River into Illinois.  We wandered over and across while my camera clicked away endlessly at the steel girders and supports.  We speculated over the nature of the odd buildings set in the middle of the river (which we later discovered were old water intakes the city built) and their usefulness in the event of a zombie apocalypse.  I was also very excited to discover the bridge was used in the climactic chase sequence at the end of one of my favorite cult classic films, ‘Escape from New York’.  The whole bridge experience was probably my favorite destination of the trip.

After the long walk, we needed food.  I kept the Route 66 theme going and took us to Carl’s Drive Inn, a classic burger joint.  Although I still enjoy Tulsa’s own Claud’s and Brownie’s better, it was a delicious choice.  Once that was done, we went to the Old North neighborhood of the city to the Crown Candy Kitchen for dessert.  The line for this 101-year-old establishment went out the door and into the street, but not a single person was complaining.  In fact, all anyone in line talked about was how excited they were and what they wanted to get.  When Sam and I finally made it indoors, we were greeted with an interior that looked authentic to its roots.  It was eas 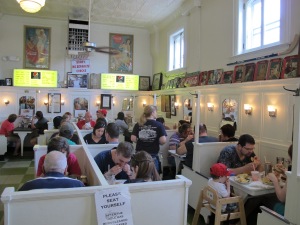 y to visualize people enjoying the same malts in the 1950s with no change to the decor whatsoever.  The chocolate malt, by the way, was truly delicious.  Once we’d wandered a little and stopped by a small arts market, we went back downtown to rest.

At dinnertime, we finally met up with our friends Leah and Darci.  We ate at a little Italian restaurant, caught up with each other, and then adjourned to a bar full of delightful concoctions (all themed around chocolate).  It was a fantastic cap to a busy day.  We had one more day left, and I went to bed just as excited as I was when I woke up that morning.

One thought on “The Spirit of St. Louis – part two”