Our final day in St. Louis contained the reason we’d made the trip in the first place (the concert!) but it held much more than that. 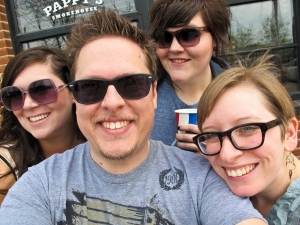 We skipped breakfast, as we planned an early lunch at Pappy’s Barbeque.  My friend Brad recommended this place, it was highly recommended online, and Leah and Darci were also very excited about it…so it had to be good.  It definitely didn’t disappoint.  While I still put Burn Company in Tulsa on the top of the Best BBQ list (seriously…it’s amazing) Pappy’s was very good.  Sam and I split some ribs and pulled pork.  The place was packed.  I think meals are my favorite social activity, also, so getting to sit and enjoy food with my girlfriend and my good friends made me a very happy person.

After filling ourselves with grilled meats, it was off to the Anheuser-Busch Brewery.  I hadn’t been all that excited about the tour, considering I’ve preferred craft beer over standard Budweiser for many years, but I loved learning the history behind the largest brewery operation in the world.  The tour lasted a little over an hour and we got to see the stables for the famous Clydesdale horses, the giant beechwood tanks, the bottling line, and enjoy a few free drinks along the way.  I had no knowledge of the brewery history, either; learning about the journey from Day One to modern day was my favorite part of the tour.  Much like the rest of the city, the buildings were primarily brick and I also really enjoyed getting to see the architectural design of their historically significant facility.  Leah had commented that it reminded her of Willy Wonka’s factory from the original film; I have to agree.  It was cooler than I expected!

Since the concert was still a few hours off, our groups split for a little while; Sam and I went to the Loop District of the city.  It reminded me a bit of Brookside here in Tulsa, only more walkable.  They had a great vinyl store, many great storefronts, and lots of restaurants.  Aside from downtown STL, it was the nicest area of the city I’d seen.  Even there, though, I could look a few blocks down side streets and see the decay creep in.  Soon enough, it was time for the show.  We donned our fancy clothes, picked up our friends, and went to the Chaifetz Arena to see Arcade Fire.  It was a great show, full of songs that I’ve loved for a long time….very worth the trip.

Since Sam had to work Monday morning, we left St. Louis at about midnight.  The drive back was grueling; it didn’t matter how much coffee I had, I still had to pull over a few times to take short cat naps.  Additionally, the severe storms that had produced tornadoes in Arkansas and Oklahoma moved through during the drive.  We made it home at about 7:30 Monday morning.  It was 3+ days of new sights and good times.  I greatly enjoyed my time in St. Louis and my additional time on Route 66.