I left the house this morning with two items on my agenda:  get a bunch of stamps for our wedding ‘Save the Date’ mailers and take a short drive southeast to see about a bridge I’d tried to visit this summer.  When I’m behind the wheel, though, it’s easy to say, “It’s just a LITTLE farther to this other place…”  By the time I got home this afternoon, I’d been on the road for about seven hours!

Stamps were easy.  I stopped by a little post office in Broken Arrow and got what I needed in about five minutes.  I grabbed the largest coffee I could buy at the Quiktrip just across the street and then set out down the road.  I’d visited the small town of Okay (yes, there’s an Okay OK) back in July, having read about an abandoned steel bridge on the edge of town.  However, the overgrowth in the thick of summer was  too much for me to get any good photos.  I figured trying again once winter had set in would be the best course of action…and I was right!

Although the eastern truss had completely collapsed (meaning I couldn’t actually get ON the bridge) it was much easier to get right up to it.  I’m amazed the bridge still exists as-is.  The western span lists slightly, as it appears to have fallen off of the concrete support.  It’s been closed for over thirty years now, but the wooden deck appears to be intact for the most part.  The Verdigris River was re-channeled at some point & it’s nearly impossible to get to the other side of the river without a quick swim, so I had to be satisfied with what I could see from the eastern shore.  That’s okay; Samantha would have killed me if I had actually risked the bridge deck itself.  When I got back to the car, I wondered if there was any other place nearby that I’d made a note to visit; after all, it was still early!  Sure enough, just past Tahlequah was another star on the map.  I put the Mustang in gear and headed out.

As I approached Muskogee, I saw a familiar shape in the distance.  Was that another bridge?  Sure enough, it was!  I pulled over at the Arkansas River and marveled at the four-span bonus find of the day.  It was easily accessible, no barriers or anything, so I was completely comfortable walking up and down the old bridge, taking photos and admiring the craftsmanship.  At one point, a group of fisherman sped by beneath me in a boat; they waved and I waved back.  You could just barely make out the old road striping on the pavement; it had been closed for a while but was in terrific shape. 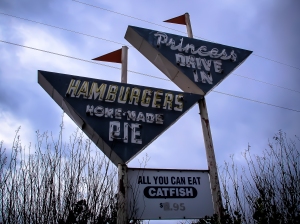 I kept going east, eventually reaching Lake Tenkiller and the Princess Drive-In diner.  It was closed for the holidays, but I was able to get what I wanted:  several pictures of their great old neon sign!  One of my former teachers had posted a photo of it on Facebook months ago and I’d been itching to see it myself ever since.  I’d like to go back some day when the place is actually open, but for today I was satisfied with what I was able to get.  I checked my map again and, sure enough, there was another stop a few miles down the road.  Why not?  Half an hour later, I found myself in the town of Vian.  Another friend had mentioned some of their mural work and it, too, had spent months on my ‘To Visit’ list.  Not only were there a few murals, but Vian had a great old water tower, too!  By now, my coffee cup was empty (and I was not) and I stopped to re-balance both of those things.

I was close to the Arkansas border.  I’d definitely gone a lot farther than I had intended, but it still was just barely noon.  I could take my time heading back to Tulsa, which made me smile.  When I’m out driving with my camera, I hate taking the same road twice.  Plus, this would give me an opportunity to follow up on another lead.  I’d been told that an old bridge over the Illinois River was going to be replaced soon.  Checking that out would take me back up towards Tahlequah, north to old Highway 10.  As I drove through the hilly, twisty roads I realized that I hadn’t been in this part of the state in the wintertime before.  I’ve gone rafting a few times on the Illinois, but of course that was summer.  It was interesting to see these same places in a different light.  The cabins were empty, the parking lots at the raft rental places were barren, and the river itself was devoid of fun-seekers.  All the trees were barren and the ground was littered with leaves and brush.  It was rather peaceful and reminded me a little of the land around Samantha’s home town of Brewster, NY.

Less than a mile from the old county road that carried the bridge I was seeking, there was a ton of construction stuff.  I started to get nervous.  Had they already started a new bridge?  Perhaps the old one had been destroyed already.  As I passed the construction barrels, I saw giant concrete piers rising from the river, ready to receive a new bridge.  There was no sign of the old bridge.  I hoped I was not too late as I turned down the old county road that I assumed held my answer.

Thankfully, the old bridge was still there.  It was surrounded by new bridge parts and other construction vehicles, preparations for the demise of the Eagle Bluff bridge.  I was overjoyed that I remembered this bridge in time.  Traffic was light and I was able to wander over and around at my leisure.  There was a wooden sign on the bridge, warning people that jumping into the river was dangerous and had resulted in people becoming paralyzed.  I could imagine the temptation during the summer months, when the river was full of rafters and canoers.  Combine that with the beer that often floats down the river with said persons and the sign’s necessity is obvious.  Although I was happy that I was getting some pictures of this grand old span, that happiness was tinged with sadness that Eagle Bluff’s days were numbered.  Such is the fate of many truss bridges in the state.

I had finally run out of destinations and headed back to Tulsa.  I stopped at Del Rancho to get a burger and a cherry limeade (a great decision, by the way!) and took the boring old turnpike home.

The Cape May Lighthouse rises 157 feet at the southern tip of New Jersey. This is actually the third one built (1859) as the first two locations were lost to erosion. #lighthouse #NewJersey
⛱️
The #Route66 episode of Roadfood must've aired recently because I've gotten a few texts. It was great to spend a bit of time with Misha Collins and Michael Stern in Arcadia last December on behalf of @oklahomaroute66. Here we are at John Hargrove's OK County 66 attraction. #Oklahoma #OK66
Many thanks to ODOT for taking me on a little tour of the one and only Pony #Bridge, what I consider Oklahoma's #Route66 roadbed crown jewel. It's due for a ton of work soon to make sure the experience is around for decades to come. #Oklahoma #ponytruss #bridges #OK66