Bachelor Party on the Route

I’ve never been one to indulge in the kinds of activities that people normally associate with stereotypical Single American Male.  By that, I mean that the activities of a typical bachelor party were not appealing to me.  Strip clubs, copious amounts of hard liquor, and other debauchery are not in my wheelhouse.  When it came time for my own bachelor party this past Thursday, I was a bit nervous.  I had no reason not to trust the organizers; they had always shown restraint, often knowing me more than I knew myself.  However, sometimes, I can’t help but fret a little bit.  Of course, I had NOTHING to be worried about, as I quickly discovered. 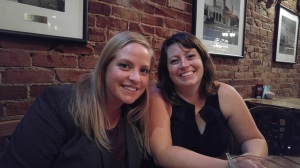 For my wedding, I actually selected TWO people for ‘Best Man’.  And they weren’t even men.  My two best friends, Kristi and Maggie, have been at my side for the past few years through many ups and downs.  Kristi and I met via online dating and quickly realized that we weren’t a match in that department, but we DID really enjoy one another’s company on a platonic level.  Her best friend Maggie and I quickly bonded over photography and a similar emotional perspective.  We spent afternoons together at the Guthrie Green, went to movies together, and counseled one another through life events.  When they learned my last birthday during my previous marriage was completely ignored (I even bought my own cake) they threw me a half-birthday party, surprising me with gifts and an identical cake.  We are kindred spirits with much love for one another.  Even though it was THESE TWO ladies organizing my party, I was still nervous.

Kristi picked me up from my house on Thursday evening at 5:45 PM sharp.  She arrived in a minivan, odd due to the fact that she normally drives a Toyota Prius.  When I got in the car, she told me the Prius was in the shop again.  I thought nothing of it.  I looked at her and smiled nervously, which elicited a wonderful laugh from the driver’s seat.  She handed me a small envelope, emblazoned with Wonder Woman’s emblem.  I opened it and was greeted with a riddle:

I hope you have come equip, we are taking you on a little road trip. You will have to figure out from the clues, where next to travel to. All the locations are along the route. It’s time we better scoot. Before you hear those wedding bells, you must start at a place known for its smells. I would hate for you to be misled; let’s go pick up some sandwich supplies at __________________.

I was informed that the night would consist of a mini-road-trip along the Route, and I would have to solve the riddle at each location to learn our next destination.  Now, I consider myself somewhat witty.  I’m also fairly knowledgeable, especially about Route 66.  But I COULD NOT figure out what the blank was on my first riddle.  I sat so long in the driveway, I asked Kristi to drive around the block so I couldn’t feel the eyes of Sam’s family staring at the van while the wheels in my head spun fruitlessly.  Finally, I realized the answer…and I felt foolish for having to think about it.  Early on, Kristi and Maggie began to refer to me as their ‘Bologna’.  It’s a term they used in high school for a friend they were inseparable from:  they were the bread and he was the bologna.  As such, I referred to them on occasion as my Breads.  So, when I realized the answer was WONDER BREAD, I felt like a dolt.

On our drive over, Maggie sent a message saying she was buried in paperwork and would be a few hours late.  I was rather disappointed, though I understood the stresses of her work.  Again, I didn’t question it, so I was delighted when we pulled up to the old Wonder Bread factory (closed since a worker strike in 2012 and Hostess bankruptcy thereafter) and Maggie was waiting for us.  Although the security guard gruffly told us to stay off of the property, we happily took photos from the right-of-way easement before I received my next riddle:

I see you’ve found your breads, Now it’s time to break out your pencil lead. Draw a picture in your mind, of the next location you must find. This is a place that is super-hot. Cactus, road runners, sand… it has a lot. Kiss your single life farewell, and head over to the ___________________. 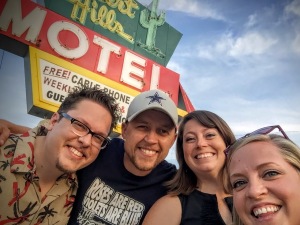 I knew this one instantly:  The Desert Hills Motel.  It’s a small place on the Route known for it’s spectacular neon sign and uneven lodging experiences.  We arrived shortly before my next clue did; it was in the possession of my brother, who was running late.  He arrived shortly, though, and was all smiles as he came up to embrace me.  I love my brother dearly; he’s a great kid with a big heart.  We posed for a few photos with the iconic neon before he gave me my next clue, which was hurriedly scrawled:

I bet it’s time you are getting hungry. Thankfully you will not have to travel cross country. We know that breakfast is your favorite. Again, it’s time to hit the pavement. I really don’t want to give it away, but we are going to eat at __________________.

Once again, I figured it out quickly:  Tally’s Cafe, arguably the most well-known Route 66 eatery in town.  It also happens to be next door to the antique shop where I proposed to Samantha last August.  We were seated quickly in the back room; I was enjoying conversation with our little group when my friend Dennis shows up out of nowhere.  I was pleasantly surprised and very happy to see him.  We hadn’t been talking but a few minutes when another friend, Noah, arrived.  Then more.  By the time dinner was finished, we were a group of eight.  At that time, I received another riddle:

Now it’s time to have some drinks. Thankfully, we aren’t going to Jenks! Let’s keep truckin’ down the Main Street of America; headed west like we are going to California. Please don’t get all befuddled, this place has been beautifully remodeled. We have already visited the Desert Hills Motel, Now it’s time to imbibe at the ___________________.

I gleefully solved this one as the Campbell Hotel.  The Campbell is a lovingly restored building that houses a boutique hotel, restaurant, and a cozy little bar…the latter being our destination.  Maggie’s husband Daniel was there and Sam’s brother Caleb joined us, bringing our party to ten.  As the drinks were ordered, my ears picked up an accent from the party of four that had preceded us at the establishment.  I walked over to them and casually asked if they were traveling the Route…and they were!  We had a great extended conversation about their trip (from LA to Chicago) and I was able to impart some of my experience to help guide them along the road.  It was a lovely convergence.  After a bit, Kristi revealed she was on a specific timetable and we still had more destinations to hit.  I received my next clue:

Now we are going to skip forward in time. The clock tower at the next location does not chime. Hopefully we will not see Doc Brown’s tombstone. Please don’t google it on your phone. Let’s travel further down Rt. 66. As the clock tower ticks; 10:04 is when the lighting struck. However, we are in Tulsa and going to __________________. 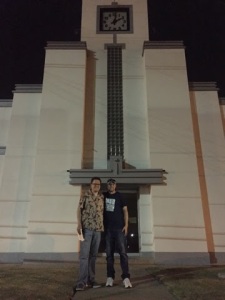 This one completely stumped me.  I couldn’t think of ANY place along Tulsa’s section of 66 that had a clock.  The Meadow Gold sign had a clock originally, but it had been gone for years.  There was a cemetery a few miles down the road, but I couldn’t make sense of the other clues.  After a few minutes of pondering (with the entire group waiting for me to figure it out) I was given a small clue, and I realized that I had forgotten one of Tulsa’s Art Deco beauties:  the Tulsa Monument Company building.  And, it does have a clock.  By the time we arrived, it was full dark outside.  My clue was hidden among the sample gravestones in front of the building, which I found in short order:

Even further west on the Mother Road, to a location where the neon lights glow. We are all so excited for you to get married. In the past this company’s business was dairy. We should arrive at about a quarter past nine. So of course, the next location is the ___________________.

Ever since my little trip started, this is the location I was waiting for; one of my favorite sights on the entire stretch of Route 66: the Meadow Gold sign.  It glowed brightly in the night as we arrived, welcoming us with green and yellow light.  My final clue was taped to one of the informational markers on site, and it read:

This next location is your last stop, and now it’s time to bar hop. Exactly where we go is up to you. No matter what, there will be plenty of cold brew. We hope you’ve really enjoyed your party, and that you two will be a happy couple like Jennifer and Marty. With Sam, we know your future will be filled with exciting and bold exploits, But for now, let’s hang out at 2nd and ___________________.

I was overwhelmed with emotion.  I felt so loved and so…KNOWN.  I felt a twinge of shame for ever having doubts.  I hugged Kristi and Maggie fiercely, legitimately fighting back tears.  I could not have asked for a better way to spend the evening.  I decided that we would cap the night at McNellie’s, a great little pub downtown JUST off the original alignment of the Route.  When we arrived, I was surprised to bump into my Mom; evidently Samantha’s bachelorette party had recently vacated the place, en route to more bars downtown.  Those in my party that were left sat and caroused until we were weary.  I went home feeling blessed and relaxed, completely ready for the big day on the 10th.

Rhys Martin was born in Tulsa, Oklahoma in 1981. In 2009, he sold everything he owned and left the country, living out of a backpack for ten months. He discovered a passion for photography while traveling throughout Southeast Asia and Europe. After returning home, he looked at his home town and Oklahoma heritage with fresh eyes. When he began to explore his home state, Rhys turned his attention to historic Route 66. As he became familiar with the iconic highway, he began to truly appreciate Oklahoma’s place along the Mother Road. He has traveled all 2,400 miles of Route 66, from Chicago to Los Angeles. He has also driven many miles on rural Oklahoma highways to explore the fading Main Streets of our small towns. Rhys has a desire to find and share the unique qualities of the Sooner State with the rest of the world. Cloudless Lens Photography has been featured in several publications including This Land, Route 66 Magazine, Nimrod Journal, Inbound Asia Magazine, The Oklahoman, and the Tulsa World. In 2018 he published his first book, Lost Restaurants of Tulsa. Rhys loves to connect with people and share his experiences; ask him about enjoyable day trips from Tulsa, locations along Route 66, and good diners or burger joints along the way.
View all posts by rhysfunk →
This entry was posted in Uncategorized. Bookmark the permalink.