Saturday, October 10th was a glorious day.  Samantha and I were married at the historic Cain’s Ballroom in Tulsa, Oklahoma with more than 100 of our friends and family there to celebrate the culmination of the last two years of our lives.  It was fantastic, amazing, and wonderful.  Two days later, Sam and I boarded an airplane bound for Orlando, Florida to begin the first trip of our married life:  our honeymoon at Disney World!  As a kid, I visited Disney seven times, thanks to the generosity of companies such as Frito-Lay and Coca-Cola.  My first trip was in 1986 and my last trip was around 1997.  As we boarded the bus to our resort at Orlando International, I wondered (not for the first time) what the experience would be like as an adult.  In a word:  magical.  Over my next few blog posts, I’ll go over our week at the Happiest Place on Earth.

When we arrived at the Wilderness Lodge, our home for the next week, we were welcomed warmly.  The resort is themed after retreats in the Pacific Northwest, even going so far as to have wooden beams made from actual trees from the region.  All of the Cast Members (Disney term for staff, since everyone plays a part) are dressed in regionally-authentic garb.  I also noticed everyone’s name tag listed where they were from; our first interaction was with a man from New Zealand.  As we were brought inside, I talked to him about my travels in the country; he was delighted.  We talked positively about Lake Taupo before we were checked in.  Disney World employs the latest technology to make Park Life easy. Samantha and I were each issued a ‘Magic Band’ which is not much more than a bracelet with an RFID chip embedded within.  That bracelet served as our key for our entire stay.  We used it to get into our room, pay for meals and merchandise, & utilize the park’s FastPass service.  We overheard a family conversation and learned each band also contained contact information, so if a child was lost, all a Cast Member needed to do was scan their Magic Band to get parent contact information.  It’s brilliant!  I haven’t even been home 24 hours and I miss the convenience of the thing.

Since we arrived in the late afternoon, we didn’t go to any of the Disney parks that first night.  We did, however, hop a bus and go to a different resort.  Our friend Susan (whom we affectionately refer to as our Fairy Godmother) is a Disney lifer and gave us a LOT of great tips for our visit, including the fact that the Art of Animation resort had an area themed after the Pixar film ‘Cars’ which itself is based on Route 66 culture.  Samantha and I loved wandering the resort, which also boasted Lion King, Little Nemo, and Little Mermaid areas.  I loved getting to walk up to full-size replicas of the characters from Cars and seeing the detail from the film meticulously re-created at what Disney considers one of their ‘Budget’ resorts.  The inside of the main building was covered in re-created animation sketches, showcasing the transition from page to screen.  We ended up eating at their food court while we were there, and I was surprised at the selection available and how good the food actually was.  It was a delightful experience. 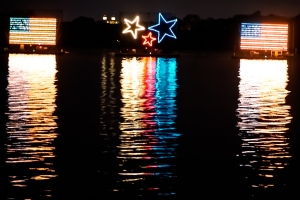 When we got back to the Wilderness Lodge, we went for a swim.  The pool area of the resort (and ALL the resorts we ended up visiting during our stay) is meticulously designed with accents that match the theme of the hotel.  There was a bubbling spring in the lobby that flowed outside, down a waterfall, and into the main pool.  A large structure with various water spouts and play areas sat just off to one side, as did a pair of Jacuzzi tubs.  While we were swimming, I heard music in the distance.  I toweled off and headed to the edge of Bay Lake, which the Lodge sits on, to see several floats on the water.  Every night, Disney has a train of floats that go around to the resorts surrounding the Magic Kingdom, playing music and showcasing lighted displays.  It’s an unadvertised bonus.

Speaking of bonus:  when we checked in, the front desk gave us CONGRATULATIONS balloons and buttons celebrating the fact that we were on our honeymoon.  Throughout the week, cast members congratulated us on the wedding and asked questions.  Either their training here is REALLY GOOD or they were genuinely happy for us.  We didn’t talk to one person that felt insincere.  For our meals, we were often treated to unsolicited dessert or champagne to celebrate.  It really made the entire experience that much better.  Everyone was super helpful, actually.  From bus drivers to housekeeping to concierge services to gate attendants.  EVERYONE seemed to be happy, welcoming, and committed to ensuring everyone enjoyed themselves.  This behavior bled over to the guests, too.  I had conversations in every line I stood in, with people from all over the globe.  I have never felt more comfortable talking to strangers in my life.

My next post will dive into our first full day at Disney, which includes the Magic Kingdom and dinner at the California Grill, a restaurant atop one of Disney’s oldest resorts.  I can’t wait to tell you all about it!