Last weekend, an unexpected late night at the hospital threw off my whole weekend.  Although the weather was beautiful, I stayed around the house the whole time.  (I’m fine, better safe than sorry.)  I had planned to take a trip with Sam this weekend instead, touring down through southeast Oklahoma and the western part of Arkansas.  That didn’t work out, either; it was Sam’s turn to feel unwell.  We decided to rest again, get some housework done, and work on our Valentine’s weekend plans.  We made plans for Sunday, at least, to go to brunch at a Tulsa restaurant I had not been able to visit yet. 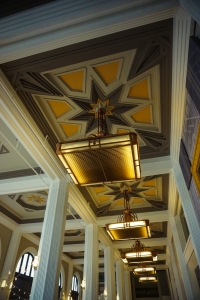 Today we rose early and drove to the old Oklahoma Natural Gas headquarters downtown.  The building was featured on the Tulsa Foundation for Architecture Tour I attended in December, but we only saw the outside.  Now, I was finally able to see the inside…and it is glorious.  The ornate Art Deco ceiling and light fixtures have been lovingly restored and classy black-and-white photos of town adorn the walls.  The columns are detailed and the windows have a marble base; I can’t picture people coming into this grand lobby to pay their gas bill.  The business that occupies the lobby, 624 Kitchen & Catering, is only open one day a week for a brunch buffet.  It’s expensive, but the food is absolutely superb.  I had an omelette with bacon and cheese, a savory biscuit with gravy, a bit of prime rib, a quarter waffle, and some kind of cinnamon bread delight.  The coffee was perfect (as was Sam’s mimosa) and the atmosphere was truly stunning.

As we were wrapping up our meal, a lady approached our table.  She had an extra gift certificate that was days away from expiring and was unable to use two for the same meal; rather than let it go to waste, she wanted someone to make use of it.  We were stunned and grateful.  I know this kind of thing can happen anywhere, but in that moment I was a proud Tulsan.  Gloriously full, we exited the building to the sound of church bells echoing through the streets.  Inspired by the design and decor of our dining experience, I stopped off at Maple Park to get a few shots of the Tulsa skyline; I posted one today here.

Later in the afternoon, I began to feel restless.  My wanderlust was like a fever I could no longer ignore.  Samantha recognized this and encouraged me to take a short trip somewhere.  I initially waved it off, but soon realized she was right. At 3:30 PM, I left and headed to Wagoner County.  This past summer, I’d seen some overgrown ruins in the tiny town of Tullahassee & marked them for a re-visit; it was relatively close and sounded like the perfect destination.  Since it was Super Bowl Sunday, I also figured I’d be pretty much by myself.  Indeed, when I arrived at the town, it was ghostly quiet.  The lack of greenery in the wintertime gave me better access to the stone ruins, too.

Tullahassee is the oldest surviving all-black town in the state.  Oklahoma has a long history not only with Native Americans, but African Americans too. In fact, Tullahassee was home to Flipper Davis College, opened in 1916 and the only private institution for African Americans in the state.  It closed in 1935, though, and the town has been home to under 200 people ever since.  In 1939, the WPA built a six-room schoolhouse that lasted for about 70 years.  It burned down sometime in the last few years, judging by the debris that still exists at the site.  The design is what some folks call “giraffe stone” which is regularly found throughout northeast Oklahoma and throughout Missouri.  Charred wood still clings to a the walls in a few spots. 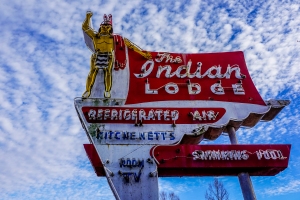 I still had some sunlight left, so I continued east.  Just past the town of Wagoner, I stopped at a place I’d first visited a few years ago:  The Indian Lodge.  It’s a modest little resort near Lake Fort Gibson that would be right at home on Route 66 somewhere.  I haven’t found anything about the history of the place, but they have a BEAUTIFUL neon sign out front.  It’s in great shape, too.  Just past the lodge is a multi-span truss bridge, which I was distressed to discover has been bypassed.  From the looks of the construction around it, it’s pretty close to being dismantled.  Another one of Oklahoma’s historic roadway structures, heading for the scrap heap. My next stop, just east of Tahlequah, was another old bridge.  This one spans the Illinois River and was damaged when the river flooded to historic levels recently.  It had been closed for a while, anyway, but now it’s pretty much cut off from even pedestrian traffic.  I wandered around the base of the bridge, taking a few photos and enjoying the last warmth of the day.  As the sun dipped behind the hillside, I returned to my car and headed towards home.  The sun peeked out at me every so often as I wound through the hills of Cherokee County, taunting me to find one more place to capture the sunset. I decided that if there was still light left, I’d make one more stop….and I made it just in time.

My final stop was at the derelict Lindsey-Mayes bridge near Pryor, OK.  I’ve stopped here a few times, and the old crossing has been in poor shape ever since I’ve known it.  It was closed long ago, with one truss missing entirely.  Another truss had no deck whatsoever, and the others looked like they could barely support a few birds in their current condition.  One of them did collapse recently, victim to the same flooding that damaged the bridge near Tahlequah I’d just come from.  As I took pictures of the remaining two upright trusses, I looked into the river and saw the half-buried metal skeleton that had so recently come to rest there.  It made me wonder when the rest of this old construction would join it in the riverbed, leaving only concrete piers in the water as a reminder. It was a relatively short round trip, 2.5 hours or so.  I returned home as the last light of dusk faded from the sky, feeling rejuvenated and accomplished. The time on the road was much needed.  It’s crazy to think of my life before I discovered my passion for photography, or my love of travel.  I feel incomplete without them.

One thought on “Brunch & an Afternoon Drive”