I arrived at the city limits to Erick Oklahoma around 10:30 AM on Saturday, having been on the road for about three hours already.  I pulled up to a small brick building just off Route 66 called the Sandhills Curiosity Shop with no expectations other than a few photos.  Although I’d driven through town before, the shop hadn’t been open.  I’d only heard stories about this place and the proprietors of this one-of-a-kind roadside attraction.  In fact, they are some of the most well-known personalities on the Route.

The Curiosity Shop is billed as The Redneck Capital of the World by the owners, Harley and Annabelle Russell.  They bill themselves as the “Mediocre Music Makers” and are known to bust out in song for weary travelers.  Originally, they had turned the old City Meat Market building into a health food store.  One day, years ago, they were pickin’ at their guitars when a tour group stopped in.  The tour folks loved it and said they’d be back; by the time their two-person madcap music theater act became a staple for travelers, they had hundreds of humorous hymns they could spring on unsuspecting tourists at a moment’s notice.  They were off-color, unpredictable, and inseparable.  “You get the best of our love!” they were known to say.  Tragically, Annabelle passed away in October 2014 after a long struggle with cancer.  It was the first “big event” that happened in the roadie community after I got involved with the various Facebook groups.

When I got out and started taking pictures, I noticed the front doors to the shop were gated and locked.  This wasn’t entirely unexpected; I knew from my roadie friends that Harley took Annabelle’s passing hard, and the shop wasn’t always open.  I was happy enough  buzzing around the old market, capturing the SCORES of signs that decorate the building.  A hand-painted sign over the door advertised “Insanity at its finest!”  As I walked around the north side of the building, I saw a man with a long white beard getting out of a Pontiac Aztec.  I recognized him immediately:  it was Harley.

He greeted me, boisterously, with a mischievous twinkle in his eye.  He saw my camera and immediately told me to take as many pictures as I wanted.  He mentioned that he wasn’t going to open up the shop today, but he was going to get a sign from inside to put on the front step for any passers-by to take pictures with.  I was fine with that, as I hadn’t expected to see the inside at all.  He asked me where I was from, and we talked a little as he opened the doors.  When he went inside, I walked around a bit more and admired the wealth of roadside memorabilia that surrounded the property.  Distantly, from inside the shop, I hear Harley say, “Sweetheart?”  I didn’t pay it any mind.  A few seconds later, he sticks his head out.  “Sweetheart?” again.  This time, looking right at me.  I was caught off-guard.  “Yessir?” I answer.  “Come on in here a minute!”  I paused for half a second, then obliged.  After all, eccentricities are the spice of life for the Linear Village of Route 66.  You just gotta roll with it.

When I entered the Curiosity Shop, I was awestruck.  The amount of signs that adorned the building on the outside were multiplied tenfold on the inside.  It was the largest horde of signage I’d ever seen!  Not just reproduction stuff, either; he had a lot of originals from who-knows-where.  He gave me an old, rusted Oklahoma Route 66 shield and took a picture of me with it; afterwards, he had me check the camera to make sure the flash had gone off as to properly reflect the 66 shield on his back wall.  I told him I had wanted to stop by several times in the past, but my timing has never been right.  “I don’t give a FUCK about timing!” he said with unexpected gusto.  “Good timing, bad timing…3/4 time, timing belts, egg timers…” he trailed off, smiling amiably.  It wasn’t aggressive at all; it was colorful.

“Ya want somethin’ to drink?” he asked.  Before I could answer, he rattled off my choices: water, soda, beer, whiskey.  I begged off, being already full of coffee from the morning drive.  “Well, I need to freshen my breath,” he said as he took a swig of Johnny Walker.  At that point, I noticed there were a lot of various bottles scattered around the shop.  He reiterated that he wasn’t going to open the shop fully…but invited me to his house instead, which was just around the block.  I accepted immediately.  Now, that may sound crazy…but Harley is well-known for his unconventional antics. He is beloved for them.  I felt as safe with him as I would if I were with my own family, even though I’d just met him.  We walked out of the shop, he locked back up (after placing the aforementioned sign in the doorway), and I followed him back to the north side of the building.  “Get in and I’ll drive ya.  It’s that one,” he said, pointing ten feet ahead at the only car on the street.

On the ride around the block to his place (which actually backed up to the shop itself) I offered my condolences.  “I was so sorry to hear about Annabelle,” I said as we pulled up to his house, which he referred to as the Redneck Castle.  Without pausing, he said matter-of-factly, “It’s a living hell.”  Harley’s house was much like the shop:  the exterior was covered in signage, and the interior was even more cluttered.  The smell inside brought back memories of my Grandma Mary’s house, which is tied to the slightly sweet odor of a gas furnace.  I met Harley’s dog (super friendly!) and got a tour of the Redneck Castle.  Harley’s descriptors for each room were very colorful; I won’t reprint them but suffice to say he was always “on”.  There’s a good reason people often call their visit with Harley as their most memorable experience on 66.

After the tour, I shook Harley’s hand once more.  He asked me to wait a moment, and he picked up a guitar.  There, in his living room, I was treated to the last stanza of Get Your Kicks on Route 66.  It was a touching experience, and something I’ll never forget.  He offered to give me a ride back to the shop, but I assured him I could walk it easily enough. 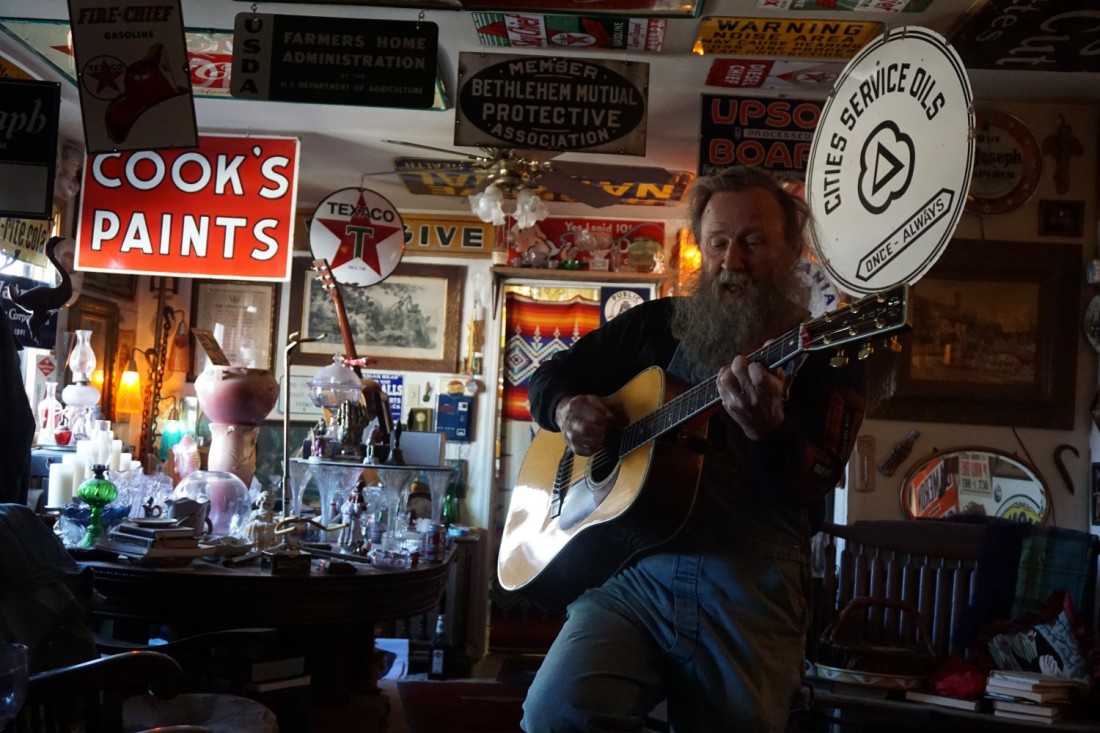 Halfway to my car, I hear a voice in the distance.  “Hey, Rhys, Stop!”  It was Harley again, coming through his back yard.  “We gotta take a selfie!”  I smiled and said, “Sure!”  He dashed over to me and gave me a big hug; I couldn’t help but smile wide as I took the picture.  When I made it back to the car, I sat and looked at the Curiosity Shop.  I had a huge grin from my experience, and although I’ll never get to meet Annabelle I feel like I know her because I know Harley.  And, knowing Harley, they had to be two peas in a pod.

3 thoughts on “The Sandhills Curiosity Shop”