On the last weekend of April, I headed west to attend a few events as the Tulsa County Representative for the Oklahoma Route 66 Association.  I had to be in Clinton on Saturday and Weatherford on Sunday, so I figured I’d stay overnight and do a little exploring.  As luck would have it, my friend Sam Murray would be staying overnight, too, with his Route 66 tour group from New Zealand.  It made for an exciting weekend! 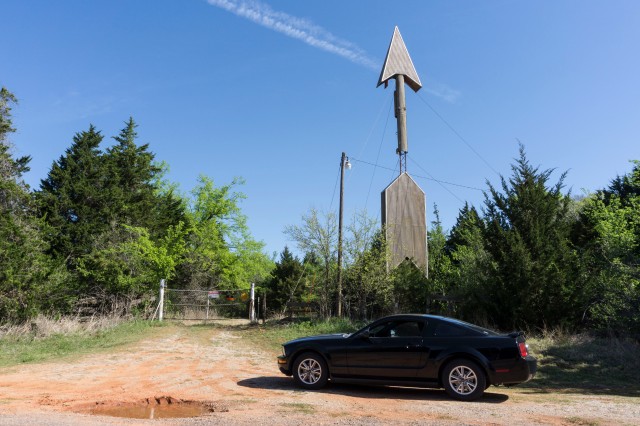 I left Tulsa early on Saturday morning. As I reached the western edge of Oklahoma City, I detoured off the interstate to see a relic of Oklahoma’s history.  A giant arrow, hidden in the trees on a quiet country lane, points towards the sky. It’s the remains of a monument from the 1957 Oklahoma Semi-Centennial Celebration called ‘Arrows to Atoms’.  It was originally almost 200 feet tall and stood at the fairgrounds to represent the progress of the Sooner State from statehood to the Atomic Era.  When it was taken down in the late 1960s, part of it was relocated to private property where it’s stood ever since. 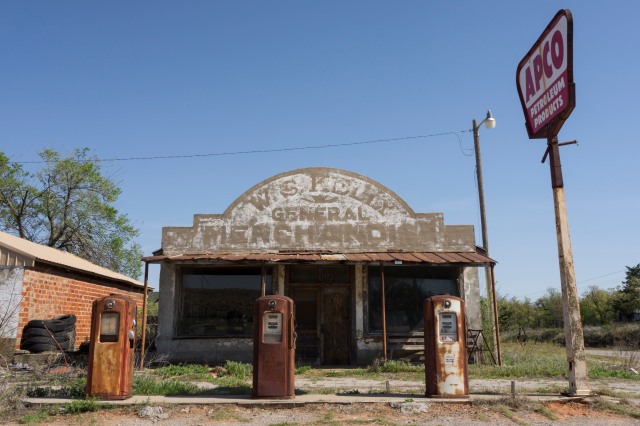 I continued west, avoiding I-40 in favor of the old roads.  Most of the drive I spent cruising Highway 152, which took me through Cogar.  About the only thing left in that town is an old general store/gas station that was featured in the film Rain Man.  It’s been closed for a long time, but still has a great look to it. I also snaked through the towns of Gotebo, Hobart, and New Cordell before heading up to the Route 66 Museum in Clinton. 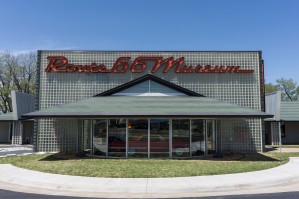 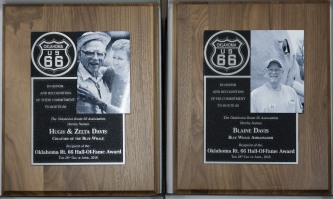 Every two years, the Oklahoma Route 66 Association holds a Hall of Fame ceremony where two inductees are honored: one posthumously and one living. This year the Association had the unique privilege of honoring the same family for both awards. The late Hugh and Zelta Davis were honored for building the Blue Whale in Catoosa (as well as a few other attractions in the area) and their son, Blaine Davis, was honored for his ongoing contributions by keeping the Whale going in addition to his long-time service to the Oklahoma Route 66 Association itself.  It was a lovely event and Blaine was quite surprised.  Afterwards, a new photo exhibit at the museum opened: Oklahoma’s own Jim Ross and Shellee Graham were the featured artists. It was great to spend a bit of time with my Oklahoma Route 66 family. 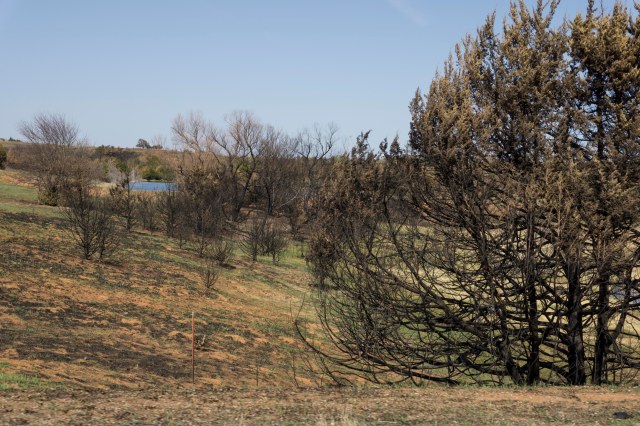 The day was still young, so once everything wrapped up I set out for a little more exploration.  I continued west to Elk City and then headed north on OK-34.  Basically, I made a huge circle back to Clinton through the towns of Hammon, Leedey, Thomas, and Custer City.  Much of the farmland was singed from a recent wildfire; it made for interesting scenery as I wound through the rural landscape.

When I made it back to Clinton, Sam Murray and his tour group had arrived for the night.  I met the New Zealanders on the Route 66 tour and we dined together, where we shared stories and a mutual love of the fabled American highway. It never ceases to amaze me when I experience the passion of Route 66 travelers.  For many international visitors, it’s the fulfillment of a longtime bucket list item.  One of the guys had even bought a classic car in Illinois and planned to ship it home when they arrived in California!

The next morning I joined Gilligan’s Route 66 Tours for a few hours. I set up in Canute, where I took some photos as the gang drove by the old Cotton Boll Motel, and set up again on an abandoned segment of the Mother Road west of Sayre.  Everyone was having a wonderful time cruising and it was nice to be a ‘fly on the wall’ for their experience.  When the caravan pulled into the one-and-only Sandhills Curiosity Shop in Erick, Harley Russell was waiting. The larger-than-life proprietor of the famous roadside attraction was standing outside the brick market with a large New Zealand flag.  “WELCOME TO AMERICA!” he shouted with his unique brand of enthusiasm.  As Harley started his tour, I bid the group farewell and headed back east. 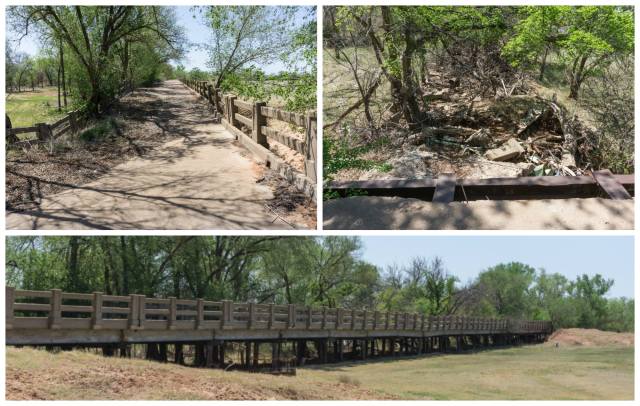 I made another stop in Sayre, this time to see an abandoned bridge.  The old North Fork Red River Bridge is now on private property and doesn’t even make it to the river; the section near the river collapsed into rubble some time back. I secured permission from the landowner to explore but didn’t dally too long.  I had to get to Weatherford for the quarterly Oklahoma Route 66 Association meeting at the Heartland of America Museum. 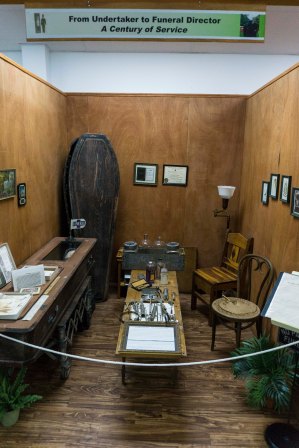 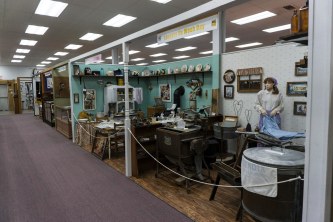 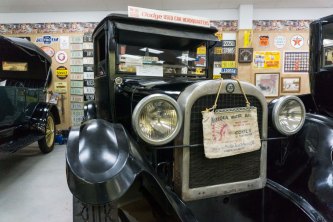 I’d never been to that particular museum before and I was impressed.  The owners were wonderful hosts and the exhibits they have on-site provide a window into Okie living throughout the history of the state.  It’s a great addition to the series of museums that western Oklahoma has to offer. The drive home held no further detours, but that was fine by me.  It had been a wonderful, full weekend.

Rhys Martin was born in Tulsa, Oklahoma in 1981. In 2009, he sold everything he owned and left the country, living out of a backpack for ten months. He discovered a passion for photography while traveling throughout Southeast Asia and Europe. After returning home, he looked at his home town and Oklahoma heritage with fresh eyes. When he began to explore his home state, Rhys turned his attention to historic Route 66. As he became familiar with the iconic highway, he began to truly appreciate Oklahoma’s place along the Mother Road. He has traveled all 2,400 miles of Route 66, from Chicago to Los Angeles. He has also driven many miles on rural Oklahoma highways to explore the fading Main Streets of our small towns. Rhys has a desire to find and share the unique qualities of the Sooner State with the rest of the world. Cloudless Lens Photography has been featured in several publications including This Land, Route 66 Magazine, Nimrod Journal, Inbound Asia Magazine, The Oklahoman, and the Tulsa World. In 2018 he published his first book, Lost Restaurants of Tulsa. Rhys loves to connect with people and share his experiences; ask him about enjoyable day trips from Tulsa, locations along Route 66, and good diners or burger joints along the way.
View all posts by rhysfunk →
This entry was posted in Oklahoma, Route 66, Travel, Uncategorized and tagged abandoned, Arrows to Atoms, Clinton, cogar, Erick, exploration, History, Mother Road, museum, Mustang, oklahoma, road trip, route 66, tour, travelok. Bookmark the permalink.