It’s interesting to think that there was a time when certain words didn’t exist.  ‘Motel’ is a good example of a word that was invented relatively recently.  Motel is a shortened version of ‘Motor Hotel’; automobiles have only been around a little over 100 years.  In between the traditional hotel and the modern motel, however, is an extinct term:  Motor Courts.  Motor Courts popped up in the 1930s and usually consisted of multiple, separate dwellings on a single property.  Many were totally unfurnished and encouraged travelers to essentially ‘camp out’ indoors.  As the car became more popular and travel increased,  business owners wanted to offer MORE than a modest cabin on the side of the road. “All the comforts of home!” became a popular slogan for many of the new-style accommodations that offered indoor plumbing, electricity, and all the furnishings.

Enter the Boots Court.  Sitting at the intersection of Route 66 and the Jefferson Highway in Carthage Missouri, the original owners weren’t sure that their modern, air-conditioned series of connected rooms were going to be successful on their own with a depression on.  A gas station was built in front of the office for an additional source of income.  The Boots offered air conditioning and a radio in every room – luxury items for budget-conscious travelers when the motel opened in 1939. Since this was an in-between time where the term motel wasn’t known by most travelers, the owner used the word ‘cabins’ to describe their lodging, even though these were more than the simple accommodations of courts past.  It was a definite success.  Over the decades, ownership has changed hands several times and there have been a few changes to the Boots itself.  The gas pumps were removed, some rooms were added, a gabled roof was added (and later removed) and the neon that once lined the lodging disappeared.  The current owners have been restoring the Boots to its 1940s-era appearance in recent years — including new neon, which was re-lit to great fanfare on Saturday, April 9th. 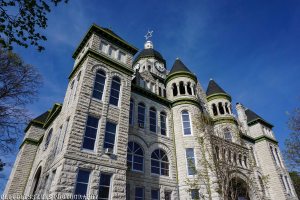 I drove up to Carthage from Tulsa and arrived at about 4:00 PM.  I had a few hours to kill before the festivities began, so I wandered the quaint downtown square just a few blocks away.  Downtown Carthage is dominated by a magnificent medieval Missouri courthouse.  Itwas built in 1894 and was greatly influenced by Annie White Baxter, the first woman county clerk elected in the US.  The businesses surrounding this imposing marble stronghold are in good health, though the late-Saturday crowd was appropriately small-town sparse.  I hoped that the celebration at Boots wasn’t as sparsely populated…though I should’ve known I would have nothing to worry about. 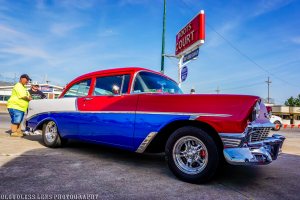 By the time I wandered back to the Boots, several of my roadie friends had arrived.  Ron Jones (the Tattoo Man) from Bartlesville was there with his immaculate 1956 Chevrolet, made famous by the TV show Counting Cars.  Judy and Richard Walker made the drive from Springfield Missouri, and Dean Kennedy was in town all the way from Albuquerque!  Throughout the evening, many more friends from Missouri and beyond arrived to be on-hand for the event.  There were many AWESOME classic cars that drove in, too.  There’s a link at the bottom of this post to my Flickr photoset that showcases them all!

As the sun set, the clouds rolled in.  Although the weather didn’t predict any rain before midnight, I became wary and grabbed my hoodie from the car. A few things happened as we grew closer to the 8:00 PM lighting time.  A group from the local VFW performed a flag raising ceremony while a middle school choir sang the National Anthem.  There were several speakers that talked about the historical journey of the Boots and expressed gratitude for those that have supported the restoration efforts.  I staked out a spot across the street so I could get a good shot of the building when they flipped the switch, so I missed out on a lot of the specifics.  In just the fifteen minutes or so I waited there, five more vintage cars showed up and found spots in and around the motel parking lot.  The excitement was palpable! 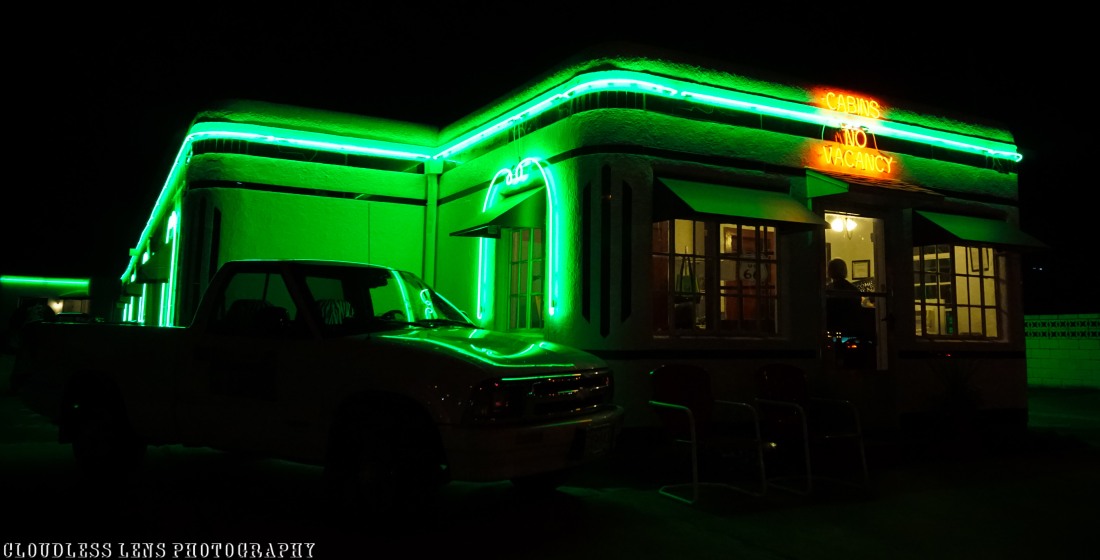 Finally, it was time.  The first 200 people that had arrived were given little light-up ink pens to simulate the glowing green of the new neon tubing, and they were all raised high for the countdown.  When everyone reached 0, the neon turned on and buzzed a bright green onto the crowd; it was glorious!  At precisely that same moment, I felt a raindrop hit my hand.  Although the clouds never really burst open, enough of a sprinkle developed to cause the crowd to dissipate quickly, many of the classic cars seeking shelter in case the spring weather decided to surprise them with hailstones.  I put my hood up and continued taking photos, getting some shots of a few 1939 automobiles that had sheltered under the awnings.

I didn’t get back home until after 11:00 PM, but I had a great time!  I can’t wait to see everyone again in a few weeks when we all get together in Lebanon, Missouri to bring attention once more to the closed Gasconade River Bridge and make sure that the Missouri Department of Transportation saves the iconic structure instead of replacing it.  A great event, to be sure, but it will be even better to be surrounded by my Route 66 Family once again.

More photos are available at: http://bit.ly/22mYMMw 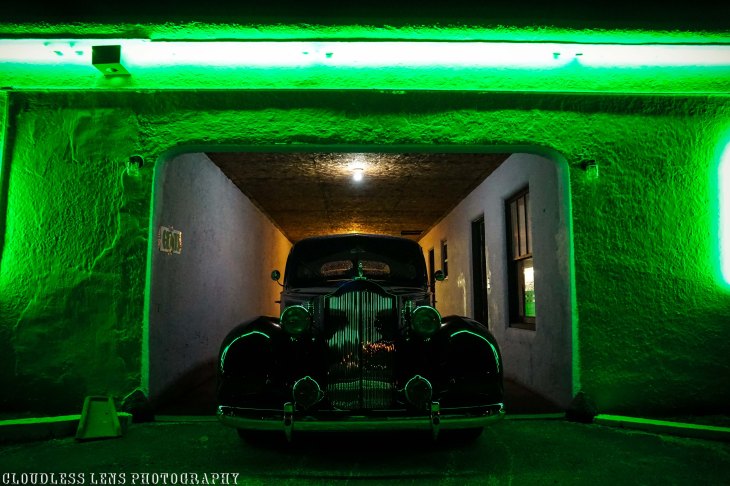 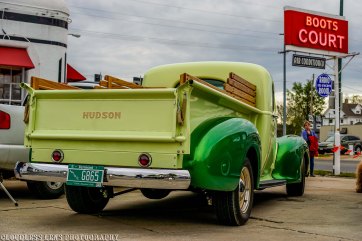 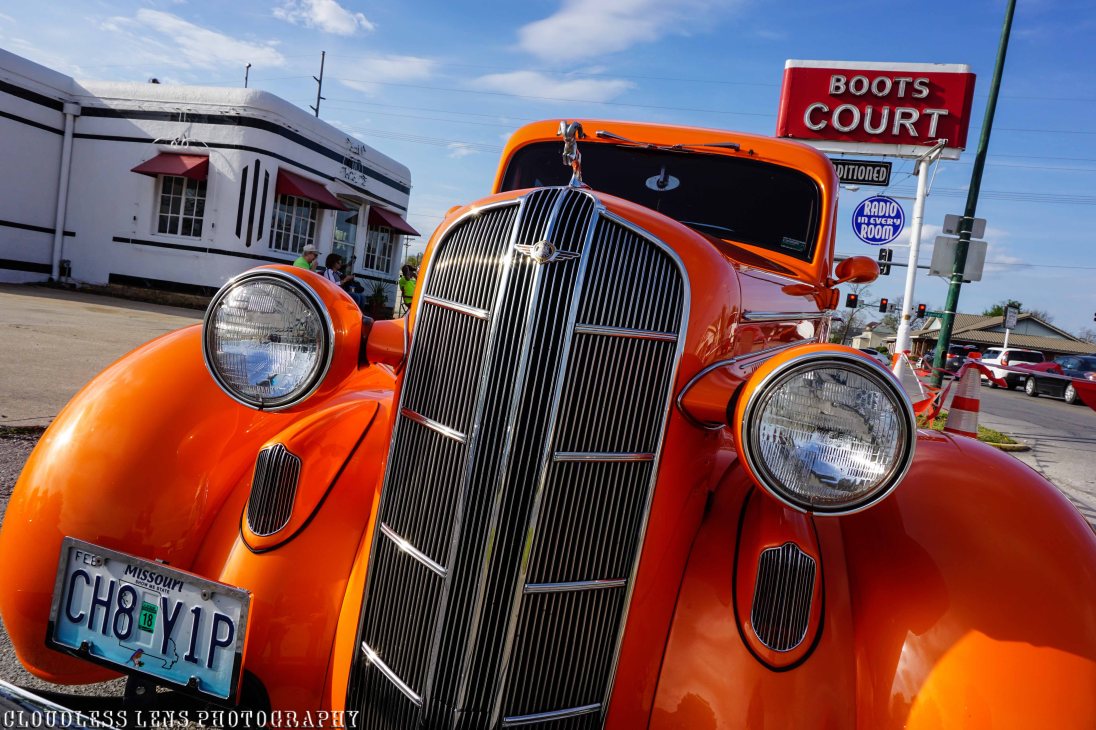