On Saturday, I woke early.  By early, I mean 6:00 AM.  Now, on a work day I have to drag myself out of bed after several snoozes and throw myself together before going into the office.  When I’m traveling the route, though, I get up early completely of my own accord.  It was a good thing, too — had I not been awake and wandering the parking lot of the Munger Moss Motel, I wouldn’t have seen the brilliant Ozark dawn.  It was a great way to start a day of activities.

The Munger Moss was packed full of roadies from across the country.  All eight states along the route were represented.  We had some folks from states beyond, too, such as Kentucky and New York.  About a third of the roadside respite’s parking spots were occupied by classic automobiles of all shapes and sizes.  Most folks were still sleeping when my friend Toshi joined me and we set out for a destination 50 miles to the east.  Toshi lives in San Francisco and originally hails from Nagoya, Japan.  In fact, he recently founded the Route 66 Associate of Japan and is planning on organizing a tour later this year.  The vast majority of Route 66 tourism comes from international markets and it’s great to see such enthusiasm for a uniquely American experience.  As we rode along the highway to our destination, I talked about my experiences in Japan and we bonded over our mutual love of tonkatsu pork and yaki onikiri.

The previous night, after a screening of Shellee Graham’s excellent documentary about the lost Coral Court Motel of St. Louis, Toshi and I got to talking about our favorite places on the Mother Road.  When I’d mentioned John’s Modern Cabins up the road, he told me he’d never seen them.  So, that’s how we found ourselves on an abandoned alignment of Route 66 in the early morning hours with our cameras.  Although I’d stopped in at the cabins the day before, it’s totally different when you’re with someone that is seeing them for the first time.  I loved seeing Toshi’s enthusiasm as he wandered around the collapsing cabins.  Once we’d explored the area, I took him over to the Trail of Tears monument I’d also seen the day before — and once again bumped into Marie as she continued her cleanup efforts.  This time, we were given permission to wander up the old driveway to the big house on the hillside.  Although we didn’t go in, it was cool to see it up close.  The old bath house is still in great shape; the wooden support beams mimicked the wagon wheel motif that was seen around the rest of the property.

By the time we were finished, it was time to drive back to Lebanon so we could attend the Gasconade Bridge Rally.  Even though it didn’t formally start until noon, I found myself at the closed bridge by 10:30.  My experiences at the 2015 rally (which I wrote about here) introduced me to roadie culture, so this year felt like a homecoming.  The turnout was better this year than it was last year, too, which included a delightful collection of classic cars.  Several I knew from last year (like Bill Johnson’s 1955 Chevrolet 210 wagon or Ron Jones’ immaculate 1956 Chevy) but there were plenty of new vehicles for me to ogle. 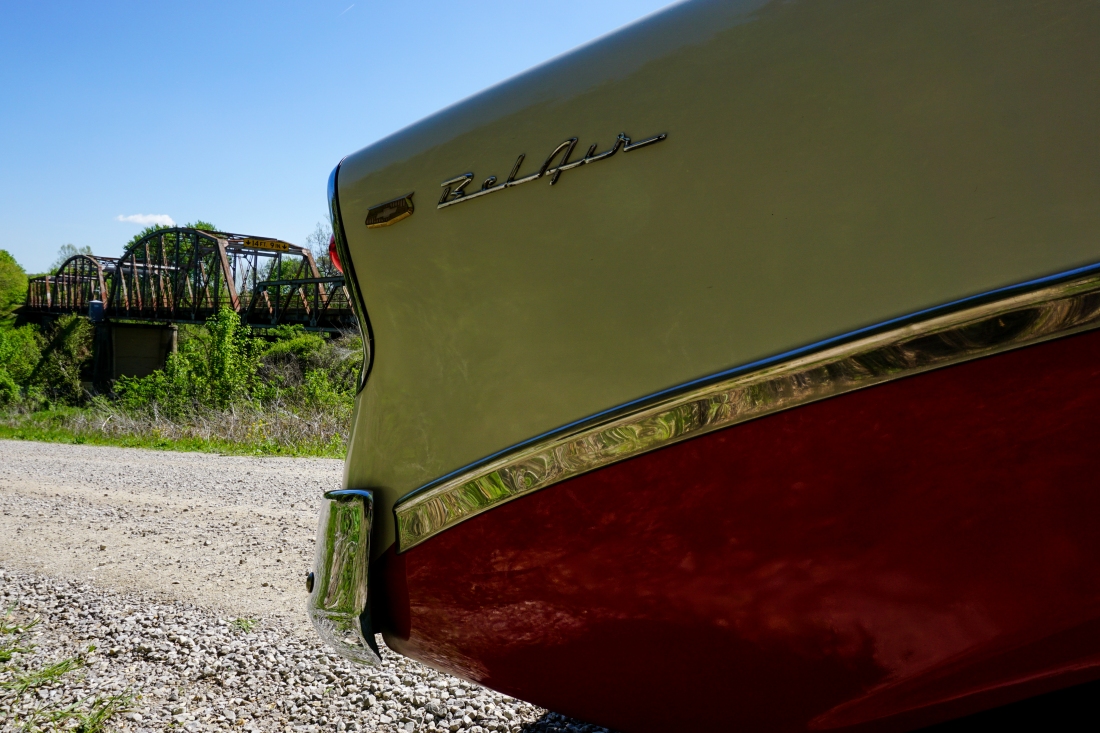 My friend Roamin’ Rich took the mic at noon and reiterated the importance of bridges like the Gasconade.  These steel structures are part of the Midwest Road Trip Experience, not just on Route 66. When these spans are combined with the historic highway it paints a picture for everyone that passes under the shadow of those steel struts.  More and more of these old bridges are being lost every year and our hope is that the additional attention will convince MODOT to save the bridge rather than destroy it.  Even enabling it as a pedestrian crossing is better than losing it forever.  Many people spoke about the importance of saving historic structures like the Gasconade Bridge, from local representatives to life-long Route 66 travelers from around the country.  I spent most of the event wandering, taking photos and catching up with my friends.  It was also warmer than I expected; I could feel my skin crisping and I cursed my choice of jeans for the day.  At around 1:30, I knew I needed to get out of the sun for a bit and get something to eat.  I told my friends that I would see them at the Munger Moss later and set off down the road.  There was another bridge I wanted to see while I was in the area, though it wasn’t on the route.  I’ll write about that side trip next time, because it deserves a blog post all on its own.  Suffice to say it was very much worth the drive.

By the time I re-entered Lebanon city limits, the bridge rally had ended.  The motel was already setting up for the anniversary celebration and several of the classic cars that I’d seen at the Gasconade were lining Route 66 right next to the giant Munger Moss sign.  Jess McEntire and his band tuned up on the concrete deck where the motel pool once sat.  I joined my friends Dean Kennedy and Judy Walker under a tent off to the side, where I spent the evening selling some of my remaining 2016 calendars while they sold Route 66 wares of their own.  When the sun began to fade and the brilliant neon sign came to life, I joined over a dozen other photographers, both professional and amateur, to capture the glowing tubes reflecting off the metal curves and fins below.  I called the sudden gathering ‘Photogmageddon’. 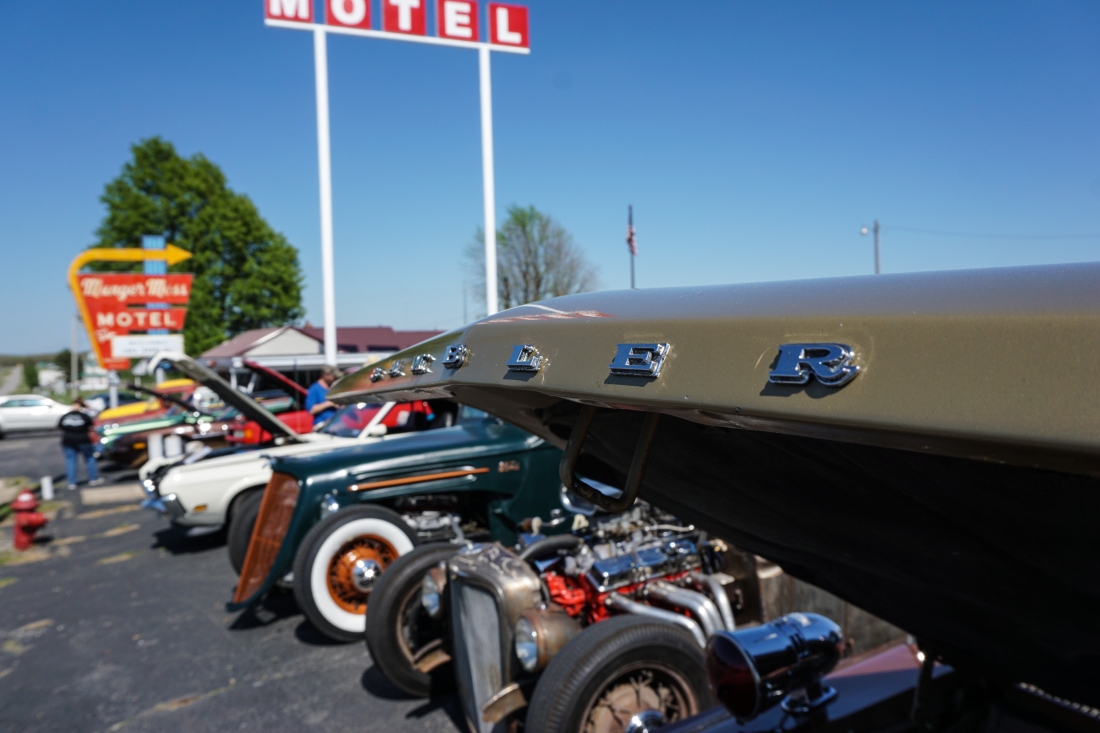 As the sky faded to black, my friend Bill came up to me and asked if I’d like a ride down the Main Street of America in his 1955 Chevrolet wagon.  I giddily said yes; I’d never ridden a classic car down the actual two-lane road I loved so dearly.  I hopped in the passenger seat, he put the car in gear…and then floored it.  That sucker could HAUL!  After that lovely tribute to Our Lady of Blessed Acceleration, we settled into a nice cruise down the winding road.  Bill told me how he looked for this specific type of wagon for years, as it was the kind his family had when he was a kid.  After he found it he was able to talk to one of the original owners that bought it new in the fifties; he learned that they had traveled quite a bit with the car, too, even taking it out to Yellowstone on a family vacation.  They had literally camped out on the side of the road on that journey.  Bill has now criss-crossed the country four times with that old Chevrolet, adding new memories to the odometer and continuing the legacy.

The next morning, we all said our goodbyes after a great breakfast together.  Some of my friends stayed in central Missouri, others went home, and a few of us went down to Afton Station to pay our respects to the late miss Laurel Kane.  By the time I walked in the front door at home on Sunday evening, I was physically and emotionally drained — but in the best way.  I already miss my roadie friends and hope I get the chance to see them again soon.