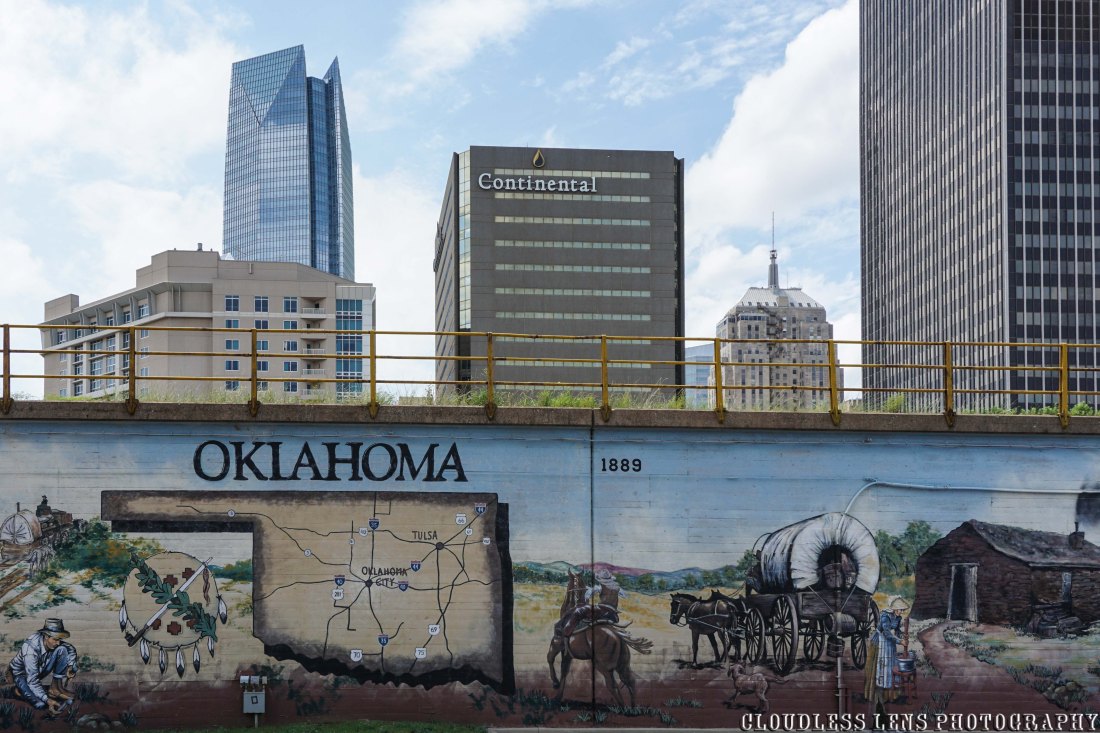 Samantha and I have been planning to take a day trip to Oklahoma City for months now.  Things kept coming up and other responsibilities took priority, but this past Saturday we finally made the trip down to Oklahoma’s capital city.  The main reason for the trip was to visit the American Banjo Museum, which has had a Steve Martin exhibit on display since February.  Of course, that’s not the only place we stopped.  We saw old friends, relived memories, and had some really good food!

We left Tulsa at around 10:00 AM and drove straight into a tremendous downpour on the edge of town.  The speed limit on I-44 is 75, but everyone was driving 35 due to the severely limited visibility.  I nearly had to pull over and wait for the storm to pass.  Thankfully, the rain let up around Bristow and we had good weather for the rest of the trip.  Our first stop was a quick drop-in to say hello at my friend Joel’s neon shop in Arcadia.  When we arrived, our roadie friends Jim Ross and Shellee Graham were there too.  They were also heading into Oklahoma City that day and recommended a stop at the National Cowboy & Western Heritage Museum.  Although we didn’t make it that day, it’s been on my list for a while.  I haven’t been in over a decade and it’s important to me to go and really take my time there.  We had a nice visit with our Route 66 friends before heading on down the road. 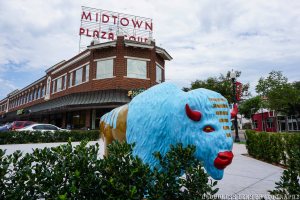 There’s a shop in OKC that Sam has tried to visit half-a-dozen times…but every attempt has been unsuccessful.  Chirps & Cheers is a stationary shop in Midtown and it seems every time we go they’re closed for one reason or another.  Yesterday continued that trend, sadly, as the shop owners were out of town to see their daughter on Broadway in a performance of ‘Cats’.  A great reason, to be sure, but it was still disappointing to miss out yet again. We consoled ourselves by eating lunch at Empire Slice House, a pizza place in the Plaza District not far away.  By chance, we bumped into some old friends of mine from my AT&T days.  They, too, were visiting from Tulsa.  It’s a small world!

As we snaked our way through the city, I had several quick photo ops mapped out.  First up was the Founders National Bank on May Ave.  It was designed by Oklahoma architect Bob Bowlby, a student of Bruce Goff.  Although the building has been modified since its original construction in 1964, the distinctive arches remain.  Lately there has been talk about the bank being torn down, so it was a priority that I stop and appreciate the construction while I could.  I hope it can be saved! 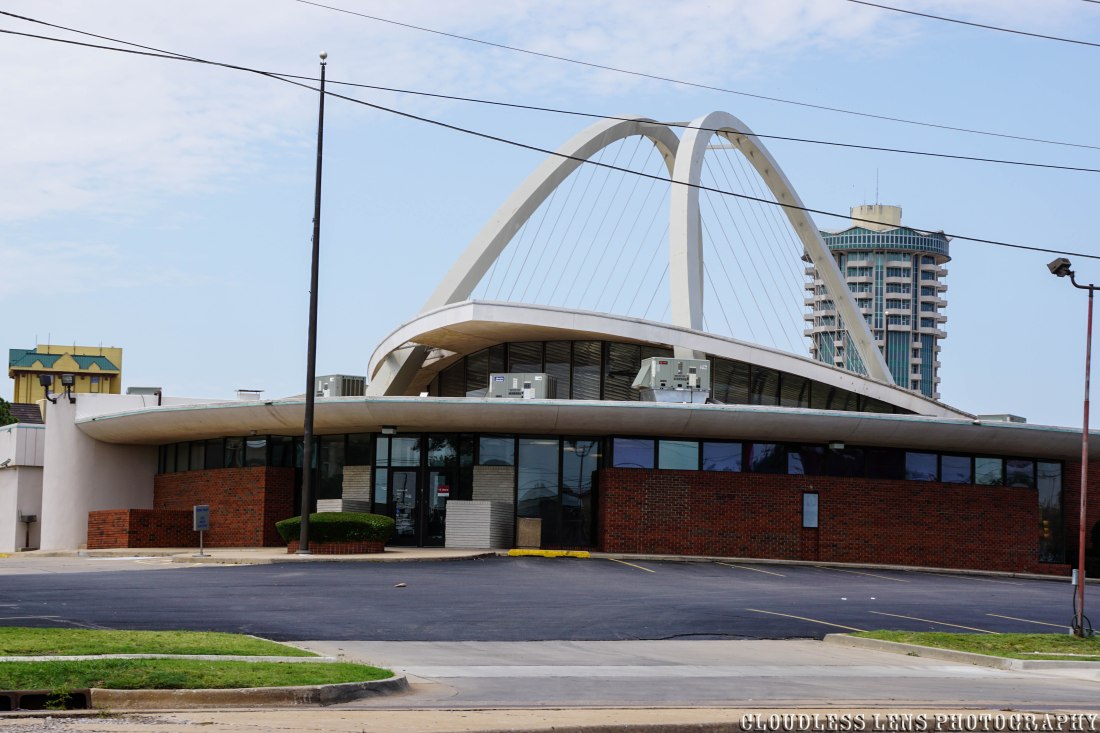 Our next few stops were all for vintage signs.  The HiLo Club is a dive bar with an old neon-and-bulb sign that’s in great shape…with the added bonus of a small Rick Sinnett mural around the roof! 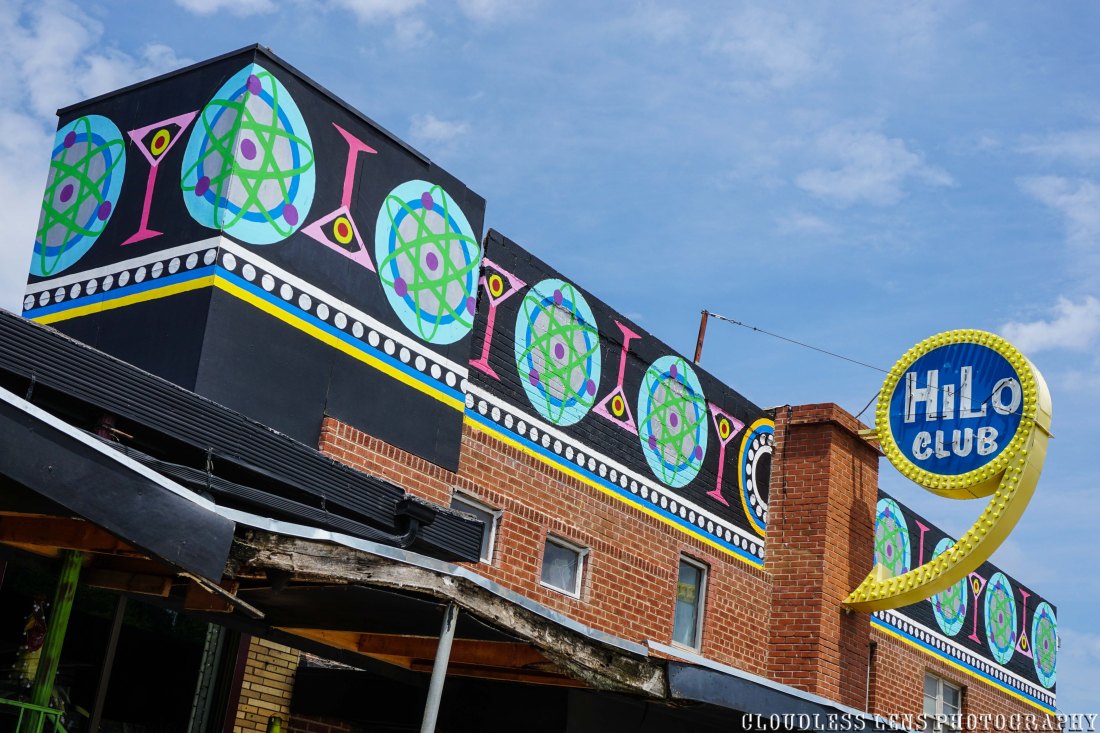 Down Western Avenue was the Cock O’ The Walk Bar & Grill, whose sign was replaced with an exact duplicate five years ago (even though they don’t even offer shuffleboard anymore) as the old one was too far gone to properly restore.

The old NuWay Cleaners sign had been repurposed for a ministry, but the sign & building are now in disrepair. 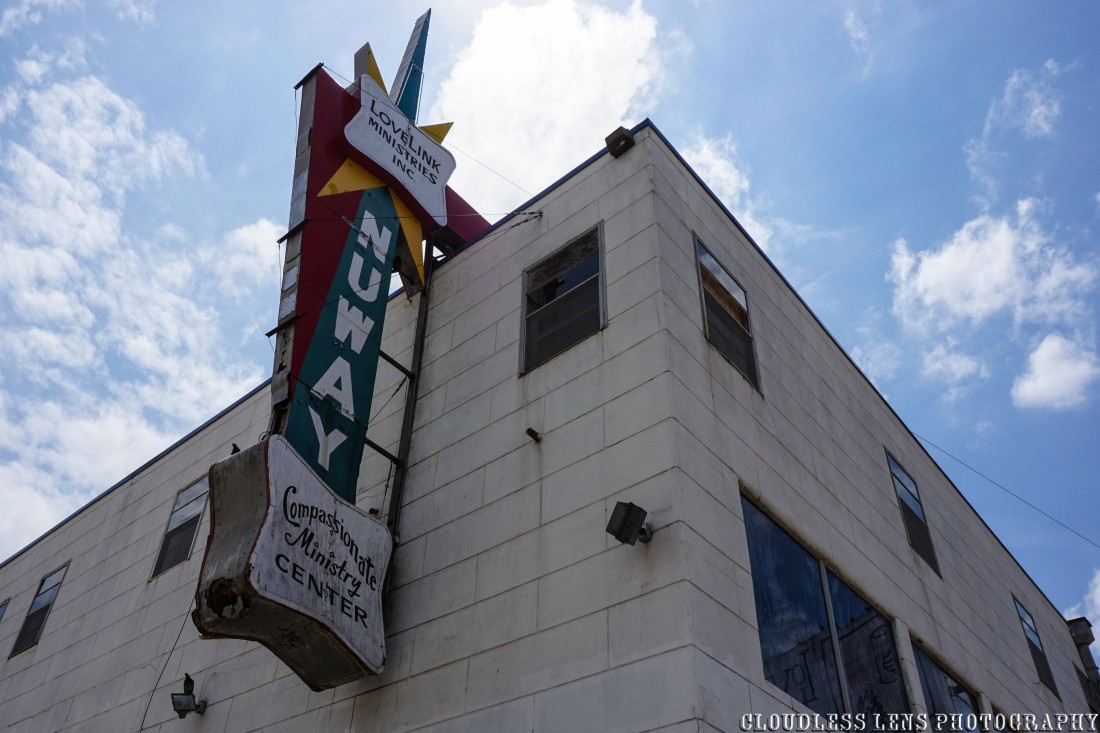 This slow crawl through the city spurred an interesting conversation about the dichotomous nature of Oklahoma City.  The city is incredibly spread out and feels like it’s in constant identity crisis.  Driving through various districts with sight-seeing intent further highlighted the fact that the city was confusingly laid out and schizophrenic with low income areas and restored historic neighborhoods right on top of one another.  You never know what’s around the next corner, that’s for sure. 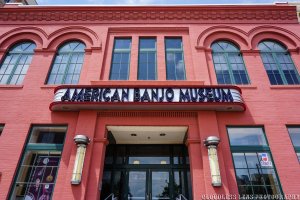 The American Banjo Museum is in Bricktown, a nicely-restored part of downtown that reminds me a little of Tulsa’s Brady District.  I didn’t know we even HAD a Banjo Museum until earlier this year when I read about Steve Martin’s exhibit.  The museum originally opened in Guthrie in 1998 and relocated to the big city a decade later.  It’s a world-class facility, showcasing the origin of a uniquely American musical instrument and the cross-generational appeal of bluegrass music.  I had no idea that the banjo itself originated from plantation slaves before the civil war and later played a huge part in the music of the Jazz Age. 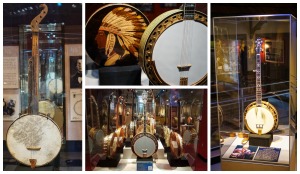 The museum boasts a large collection on display, from simple mid-19th century instruments to incredibly ornate banjos from the 1920s.  It tracks the development and popularity of the banjo all the way to present day with well-known players such as Earl Scruggs.  The Steve Martin section was really cool, featuring snippets of comedic and musical performances along with stage-used instruments on display.  It’s a great museum and very much worth the trip.  Throughout my time there, I thought of my grandfather.  Mom’s dad would often bring out his banjo (or mandolin, or harmonica, or fiddle…) and play music in the living room.  Sometimes, Grandma would sing along while she crocheted.  I miss those simple sounds and hearing the banjo twang all around me was a comfort.

We made one more stop in OKC: another one of Rick Sinnett’s murals.  Some years ago, a giant mural was painted on the side of an old silo on the south side of downtown.  The silo is used for recreational climbing and sits on the edge of a mostly-abandoned industrial park.  It is quite a sight to see such a vibrant work of art in a desolate part of town being actively used by climbers!  A lot of the area looks ready for the wrecking ball, which I sure hope doesn’t happen to this excellent site. 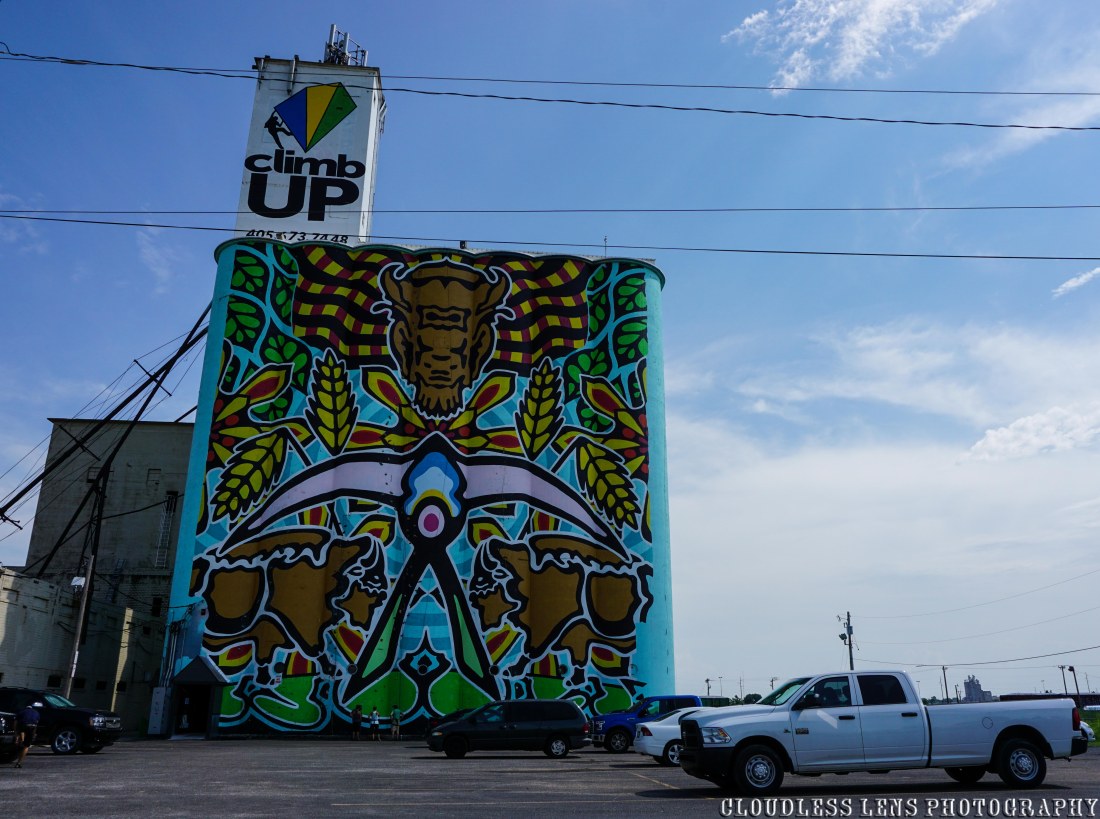 It was getting close to dinner time by the time we wrapped up at the silo, so we made our way down to Norman to visit with friends that had just relocated down there.  Samantha’s friend Melissa moved down there after being accepted as a faculty member at the University of Oklahoma.  We ate dinner at a delightful restaurant called Scratch Kitchen.  As you might expect, most of their food is made from scratch and they have a creative cocktail menu to go along with it.  I had one of the best steak I’ve ever eaten and Sam had a noodle dish that she really enjoyed.  Suffice to say, we might drive down to Norman just to eat at this place again.  The staff was super friendly & everything we had was excellent.

By the time we finished our meal, visited a bit, and hit the road it was dark out.  I put the car in park at home at almost 11:00 PM, worn out but satisfied with the day’s journey.

2 thoughts on “Banjos in The City”

The #Route66 episode of Roadfood must've aired recently because I've gotten a few texts. It was great to spend a bit of time with Misha Collins and Michael Stern in Arcadia last December on behalf of @oklahomaroute66. Here we are at John Hargrove's OK County 66 attraction. #Oklahoma #OK66
Many thanks to ODOT for taking me on a little tour of the one and only Pony #Bridge, what I consider Oklahoma's #Route66 roadbed crown jewel. It's due for a ton of work soon to make sure the experience is around for decades to come. #Oklahoma #ponytruss #bridges #OK66
Nothing like a bit of local-made ice cream to wrap up a lovely evening. Big Dipper in Sand Springs feels like an old school small town parlor. #SandSprings #icecream
1922 #Packard I had the pleasure of riding in today. The Heart of #Route66 Auto Museum in #Sapulpa is offering Saturday cruises all summer! #Oklahoma #TravelOK