I’ve been on vacation for nearly two weeks.  It’s been a busy time:  Thanksgiving, Indie Emporium, family stuff, house work.  I hadn’t been able to break free for a day and explore (as I am wont to do) until today.  I woke early, grabbed a cup of coffee, and left Tulsa without much of a solid itinerary.  I just knew I needed to turn some miles.  I wandered southwest.

I left town without actually eating anything, which ended up working in my favor.  By the time I reached Stroud on old Route 66, I was ready for breakfast.  I’m always happy to trade coin for vittles at the Rock Cafe.  I enjoyed my bacon and eggs while observing a conversation between the waitress and a gentleman in the booth behind me.  The regular was lamenting the fact that he’d missed Meatloaf Day the day before.  It sounded like a dish of true craftsmanship and genuine wonder.  The man also talked of his complete inability to cook and his reliance on cafe variety to enrich his daily routine.  I listened to them intently; they talked about things that were unimportant yet crucial.  It’s this kind of atmosphere that makes me feel most at home in the establishments along the Mother Road.

I thanked the staff for their service and headed south, veering off 66 and towards the town of Seminole.  I’d been through there several times before, but somehow kept missing a small sign on the edge of downtown.  In October, my heart skipped a beat when I saw a news flash announcing that a blazing fire had engulfed part of Seminole; I was afraid I’d lost my opportunity.  Thankfully, the old sign was unscathed.  It’s for an old drugstore; the part that caught my attention was the ‘Walgreen Agency’ neon bit at the bottom.  Around the Great Depression, the Walgreen Company set up an agency system that allowed independent retailers to sell Walgreen products.  I’d only known Walgreen’s as a chain itself, not as some kind of distributor.  I’m not sure when the Seminole store popped up, but I’m sure glad the sign is still here.  It inspired a learning experience!

I checked my map and decided to continue in a southwesterly direction.  I picked Highway 59, as it snaked through a few unfamiliar small towns, and set my cruise control.  That never lasts, though; I always see things that make me hit the brakes and take a closer look.  When I entered the sleepy town of Maud, I stopped to photograph an old Texaco station. That morphed into a detour to their derelict Main Street, where I was almost overwhelmed with fantastic abandoned structures.

Ghost signs, broken windows, murals, and other signs of life were everywhere…but no actual life, save for a few parked cars that looked like they might start if someone got a crazy idea.  I later learned that Maud was established in 1890 on the border between Oklahoma Territory and Indian Territory.  Broadway Street was actually a barbed-wire fence originally.  A boom in the 1920s brought the town to around 10,000 people, but it was short-lived.  Today the town houses barely 1/10th of that.

Further down the highway, I entered St Louis city limits.  Not THAT St Louis, of course. It never reached the ‘heights’ of Maud, always staying below 500 residents.  They did have an amusing welcome sign, though.  On the east end of town, it boasts “179 Friendly People, 1 Old Grouch, & 1 Busybody”.  On the west end, though, a newer sign indicates “179 Friendly People, 1 Pyromaniac, & 1 Busybody”  I guess the Old Grouch had had enough.

When I pulled into Stratford, I found an active community.  I didn’t stay long, though; I was simply there to capture the First National Bank building.  It’s on the National Register and reminds me a lot of Guthrie’s Victorian architecture.  Stratford also hosts a big peach festival every year and battles Porter for the title of ‘Peach Capital of the World’.  With Porter so close to home, I’ve never driven down to Garvin County for their celebration.

Next, I headed north to the Wanette-Byars Bridge.  It’s called that because it connects the two towns of Byars and Wanette.  It’s a beautiful single-lane truss bridge and I love using it to cross the Canadian River.  It’s pretty far out of the way, so I stop by whenever I’m in the area.  When I reached Wanette, I stopped for lunch at Cookie’s Cafe.  Although I wasn’t terribly hungry, I’d had a great interaction with a local a few months back encouraging me to stop next time I was in the area.  So, stop I did.

As I walked up to the corner cafe, I was greeted by a huddle of local policemen that had just had their lunch.  They nodded, I nodded back.  When I entered the cafe, I was immediately noticed by all patrons.  Although I didn’t get the “You ain’t from around here, are ya?” treatment, I knew the thought was prevalent throughout the establishment.  I took a seat and ordered a burger.  I told the cook about the interaction that brought me back to town and he smiled wide.  He was the one that had been using social media to encourage travelers to stop, and I was physical evidence that his efforts were not wasted.  “What’s in the bag?” one of the regulars asked.  “A camera!” I said with excitement and took it out to prove it.  I told the room of curious diners I’d come by to photograph the old bridge.  They  nodded in understanding and returned to their conversations, satisfied.

A few minutes later, a lady came up to my table.  “What’s in the bag?” she asked.  I guess she hadn’t been around for the previous inquiry.  “A camera!” I said again, bringing it out once more.  “What do you do with it?” she asked.  Before I could stop myself, I just smiled and said, “Take pictures!”  She smiled back, unfluttered.  “What kind of pictures?”  I told her about my penchant for road trips and small town life, which seemed to please her.  She produced a photo album out of nowhere to show me some photos that had been taken of the store and the town.  It was at this point I learned this was the owner of Cookie’s.  We talked for a few minutes about photography and the surrounding area before my food arrived.  My burger was delicious & hand-made. It would’ve been worth the stop all on its own.

I headed west, through Purcell, to the community of Washington.  They had a truss bridge there that I’d been meaning to visit for a very long time.  It was one of the first crossings I’d marked to see several years ago (back when I really got into the whole bridge thing) and I just hadn’t made it down to take a look.  About a mile away, there was a sign that startled me.  ‘OLD STEEL BRIDGE CLOSED’ it said, emotionless and without pity.  I sped up, somehow thinking that if I could just get there quick enough it would still be there.  Thankfully, the bridge WAS still there.  It was closed to traffic, but I could walk on it and take plenty of photos.  Walnut Creek trickled by underneath as I did my best to capture the metal span; I knew it could very well be my only opportunity.  More and more of these old trusses are being destroyed in the name of progress. 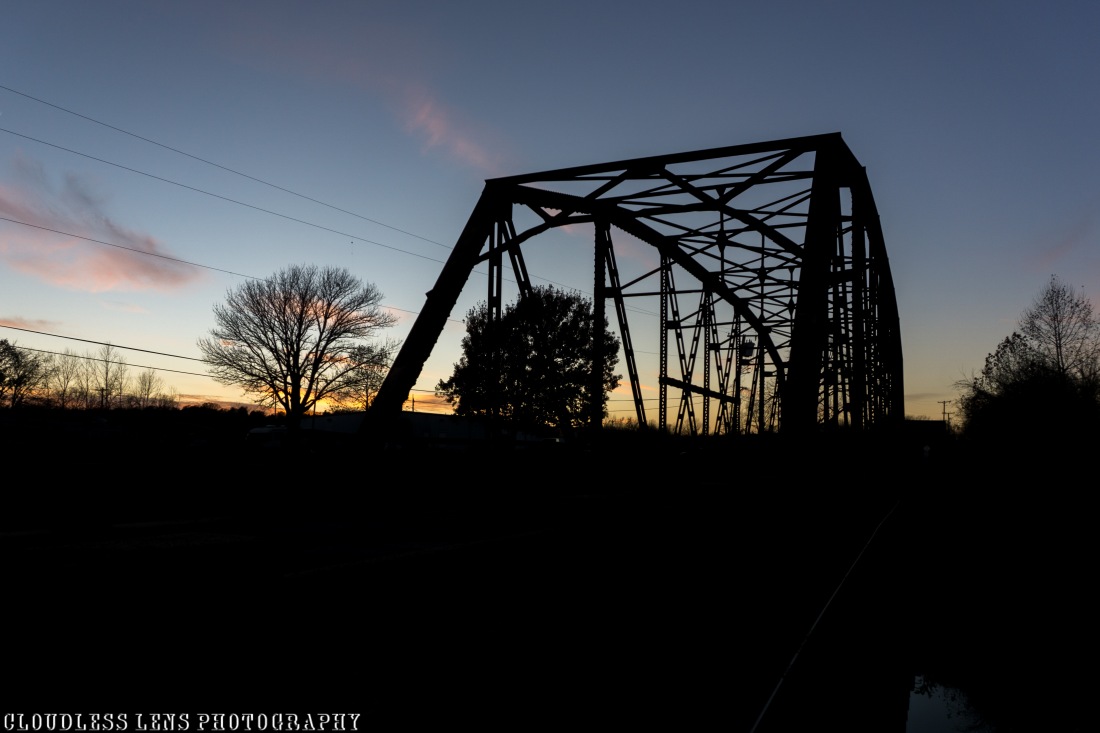 Satisfied, I got back into the Mustang and headed home.  I returned to Route 66 most of the way, enjoying the familiar curves as the sun set behind me.  I did stop for a moment to capture the fading sunlight at the Rock Creek Bridge on the western edge of Sapulpa.  It had been a good day of exploration, something I very much needed.