When I hopped on the highway this morning, I didn’t head to the office like normal.  At least, not to MY office.  My employer sent me to Columbia, Missouri to do some job shadowing at a satellite office.  I love traveling for work!  Though I was sad to leave Samantha behind for a few days, I was excited to explore parts of the Show-Me State that I hadn’t seen before.

I spent most of the morning on familiar lanes; I paralleled Route 66 all the way to Springfield.  From there, I ventured north.  The separated four-lanes of I-44 faded in the rear-view mirror and I turned miles on comfortable two-lane blacktop for the rest of the day.  There’s so much more to see when you hop off the interstate!  It’s also easier to make a U-turn when something comes up out of nowhere, like an old neon sign in Buffalo.  For a short time, I was the only sign of life at the little motel…snapping photos while locals gawked from their pickup trucks.  Downtown Buffalo was nice, too.  Interestingly, their high school mascot is the bison.  Logical, yes, but redundant.

Although the sights felt new to me, I was pretty sure I’d been through Buffalo once before.  For a few years, my father lived at Lake of the Ozarks while selling wholesale grocery shipments.  As I continued north and east towards the lake, I would occasionally see something that tripped a faded memory.  I even inadvertently took a detour to get gas and drove right by his old office!  That was over a decade ago, though, and I travel a lot differently now than I did then. 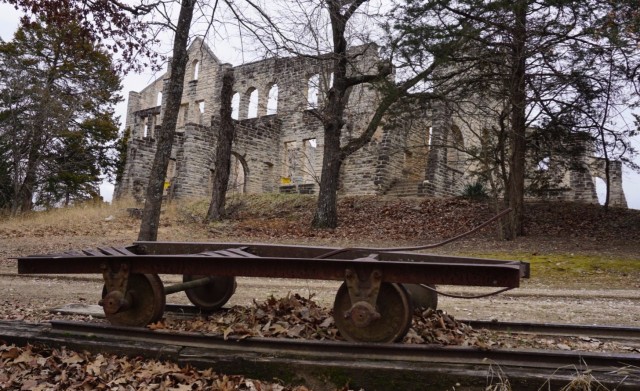 For example, previously I had no interest in Ha Ha Tonka State Park.  This time, I made a point to stop and explore the ruined “castle” on-site.  Funnily enough, the giant mansion was built by a man that made his fortune as a wholesale grocer at the turn of the 20th century.  It was completed in 1922 but only lasted twenty years before burning to the ground.  The sandstone skeleton still stands, overlooking the lake in a beautiful, expansive park.  I gotta come back in spring!

On the other side of the lake, I made a quick stop in Osage Beach.  I’d seen photos of a motel sign there that featured a revolving door, which I had to capture!  Just as I finished up and got back into the car, someone came out of the office and started coming directly towards me.  I sat and waited to see if it was going to be a “Howdy!” or a “Scram!” but they stopped half-way and went back into the office.  Crisis averted, I guess.

I was met with a surprise in Eldon; I turned a corner and suddenly this HUGE neon sign greeted me alongside the highway.  There was even a sign on the roof of the building to go with it.  I buzzed happily around motel/restaurant, waving at the housekeepers as I took my photos.  I wish I’d been hungry!

I breezed through Jefferson City (known as Jeff City to the locals) and arrived in Columbia in the early afternoon.  I had a ton of daylight left after check-in, so I hit the road again.  A friend of mine had clued me into an abandoned service station near the town of Mexico, about 45 minutes away.  I found it just as the sun emerged from the day-long cloud cover; what happy timing!

I still had a little time, so I continued north to another spot I’d marked.  I weaved down an unmarked gravel road (thanks Google Maps!) to a small bridge over Long Branch Creek, near the town of Rowena. The span was a bedstead pony truss, meaning it’s square on the ends instead of angled, and has been in the Ozark countryside since 1910.  The creek bubbled contentedly as I hopped around and the daylight faded.  I had one more mark on my map on the way back to Columbia, so I set my coordinates and skedaddled.

That final stop was the Old 63 Diner, on the north edge of town.  It opened in 1989 and closed in 2015, though it looks like it could’ve closed yesterday.  Just about everything was still in great shape; even the interior was still fully assembled.  The Archie Comics characters on the doors were barely faded and nothing had been vandalized.  Really, the only thing that has really depreciated is an old Burma-Shave sign set facsimile in the back.  It even had a faded Route 66 shield attached, though Columbia is many miles from the Mother Road.  It’s a shame the place is no longer operating; it looks like it was dearly loved.  As I circled the building, I saw a dark neon sign that said, “How Sweet It Was!”  Indeed.

Since the diner was kaput, I had to find a different dinner option.  I’d completely avoided downtown Columbia when I’d arrived, so I went that direction.  I didn’t realize it’s a FULL ON college town: bike lanes everywhere, ample public transportation…and TONS of young people not paying attention to traffic.  I finally found a place to park and enjoyed a meal at Flat Branch Pub & Brewing Company.  It was a tasty & refreshing way to cap an entire day of travel.

I’ll be here until Friday, and hope to take a few short side-trips in the evenings.  We’ll see…and, so will you!

Rhys Martin was born in Tulsa, Oklahoma in 1981. In 2009, he sold everything he owned and left the country, living out of a backpack for ten months. He discovered a passion for photography while traveling throughout Southeast Asia and Europe. After returning home, he looked at his home town and Oklahoma heritage with fresh eyes. When he began to explore his home state, Rhys turned his attention to historic Route 66. As he became familiar with the iconic highway, he began to truly appreciate Oklahoma’s place along the Mother Road. He has traveled all 2,400 miles of Route 66, from Chicago to Los Angeles. He has also driven many miles on rural Oklahoma highways to explore the fading Main Streets of our small towns. Rhys has a desire to find and share the unique qualities of the Sooner State with the rest of the world. Cloudless Lens Photography has been featured in several publications including This Land, Route 66 Magazine, Nimrod Journal, Inbound Asia Magazine, The Oklahoman, and the Tulsa World. In 2018 he published his first book, Lost Restaurants of Tulsa. Rhys loves to connect with people and share his experiences; ask him about enjoyable day trips from Tulsa, locations along Route 66, and good diners or burger joints along the way.
View all posts by rhysfunk →
This entry was posted in Missouri, Travel, Uncategorized and tagged bedstead, bridge, diner, gas station, Ha Ha Tonka, neon, road trip, ruins, rural, service station, sign, truss. Bookmark the permalink.