The last few weeks have been hectic in the Martin household.  In fact, the Martin household no longer includes a house!  We listed our home for sale in early March…and it sold in five hours.  We found a house we want to move into, but, the schedule just didn’t work out.  We’ve been spending nearly every waking moment getting things ready to go.  On Friday, we moved our stuff into storage and took up temporary residence at my Mom’s place in Broken Arrow.  During the move, my buddy Nic asked if I wanted to take a little road trip the next day.  As sore & tired as I knew I’d be from moving, I accepted without hesitation.

Our first stop of the day was in the community of Maramec, Oklahoma.  The town was founded shortly after the Land Run in the late 1890s.  It peaked at nearly 375 residents in 1930 and has been in slow decline ever since.  There are still a few buildings left in their downtown district, though they are all closed up and in various stages of decay.  As we wandered the street, a woman walked by and lamented the fact that the old bank had been torn down in recent years.  The remaining brick and stone structures were indifferent to our presence; it’s hard to imagine the place being the center of any activity.

From there, we drove northeast to Hominy.  Their downtown district has a number of great Native American-themed murals; additionally, some of the walls have been augmented by local graffiti artists.  Nic is quite the railway enthusiast and I really enjoyed walking around the old depot with him.  We were taking photos of the old Indianola Oil Company station when an old pickup pulled up.  The driver said howdy, identified himself as Bill Walls, and asked us how we liked his building.  He bought the place back in 1965 and at one time had a service station, garage, and car lot all on the property at the same time.  “That sure was a long time ago,” he said with a small smile, no doubt remembering it like yesterday.  We waved goodbye and hit the road…but we didn’t go far before stopping again.

On the east side of town, we pulled up to an unusually Modern-style building.  It had clearly been abandoned for a long time; although we could easily see through the broken windows, there was nothing to indicate what purpose this structure originally served.  It was certainly a unique sight in small-town Oklahoma. 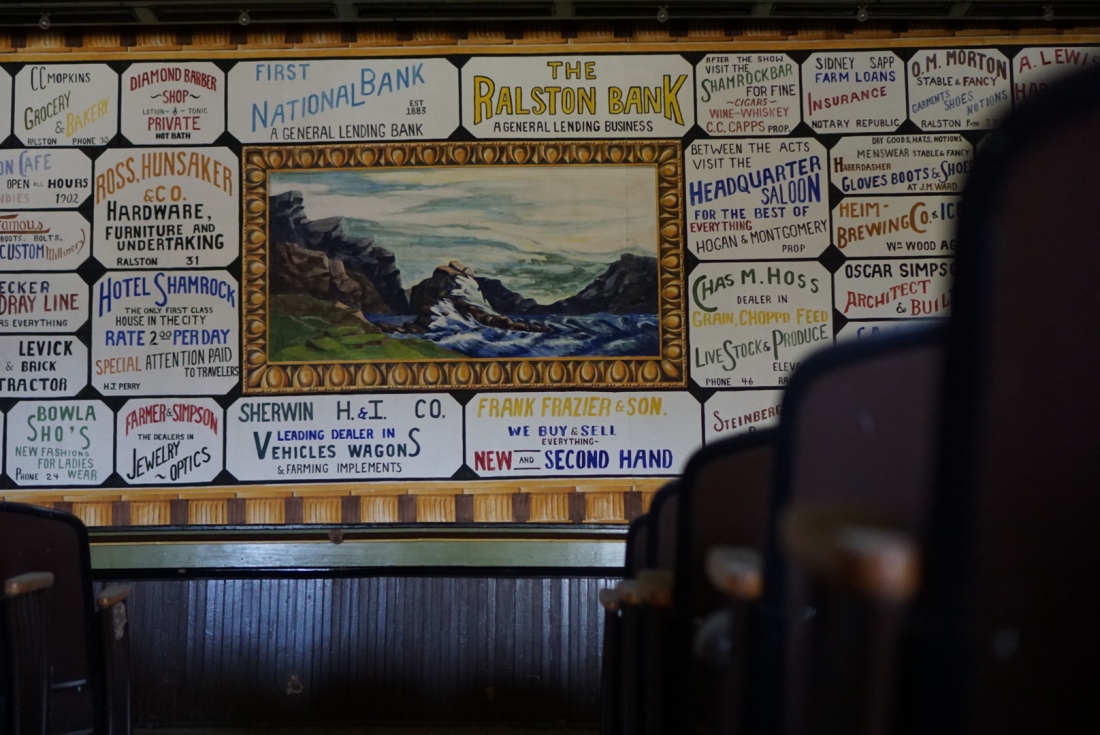 On our way to an old truss bridge across the Arkansas River, we drove through Ralston.  Nic noticed that the front door of the old Opera House was open, so we stopped on the off-chance that we could score access to the interior.  As luck would have it, people were inside doing cleanup work…including the owner!  He was more than happy to give us the dime tour.  The site had been shuttered for many years; the lower level had been used as an antique store most recently but the top level was where our interest was.  The second floor held a partially-restored community theater.  It was built in the early 1900s and must’ve been quite the attraction back in the day.  In fact, the walls of the street-facing staircase are etched with dozens of names from decades of theater goers.  The gallery held over 200 seats and the stage still boasted an old advertising screen that had been protected from the elements.  A lot of work has to be done to get it in working order & there is an ongoing GoFundMe to help with restoration efforts; you can find that here.

Just west of town, one of the longest truss bridges in the state spans the Arkansas River.  I’d been to the site before, but it was Nic’s first visit…and he loved it.  He pointed out an area under the first truss where someone had carved their name in concrete back in 1965!  It’s an inspiration to share in the excitement of others and to see what they glean from these historic sites.  The Belford Bridge, as it’s known locally, left quite an impression on Nic.  He said it was perhaps the most amazing old bridge he’d ever seen.

By the time we wrapped up at the bridge, it was past lunch time.  We took the short drive to Pawnee and dined at Click’s, a steakhouse that has been in operation since 1962.  Their longevity is not a mistake. I enjoyed one of the best ribeye steaks I’ve ever eaten in a delightfully rustic setting before returning to the sunshine to wander the town square.  Pawnee has had some earthquake damage recently, but happily most of the historic structures looked the same as I remembered them from my last visit. 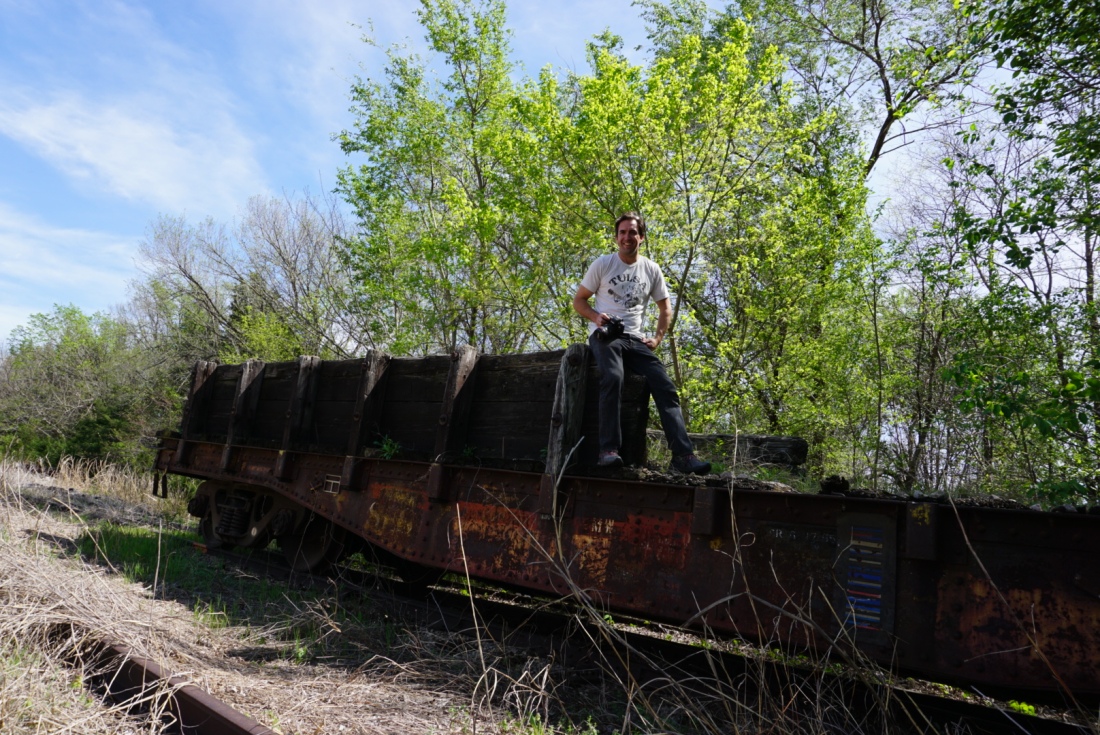 Nic took us down to the old freight depot on the outskirts of downtown where we walked the overgrown tracks, looking for date nails in the old ties and admiring a few of the old rail cars that had clearly been parked for a long time.  Nic actively seeks out monikers scratched on rail cars from fellow enthusiasts across the country; the oldest one we found in our search was from 1995…which I didn’t think was that old, but, that’s over 20 years now.  Eesh.

The road back to Tulsa took us through two more ghost towns; Skedee & Blackburn.  Skedee’s defining feature is a statue in the old town square dedicated to a ‘Bond of Friendship’ pact with Osage Chief Bacon Rind.  Yep, you read that right.  It’s a fun sculpture.  I noticed a group of folks gathered nearby and walked over to say hello; turns out they were doing the same thing we were!  They were from the Tulsa area and seeking out abandoned & rural sites to photograph.  I happily recommended a few places, including the murals in Hominy, before we parted ways.  They were all super nice and eager to learn about the area; we formed our own bond of friendship in those few minutes in an empty town.

On the way to Blackburn, we stopped at a bypassed bridge and very nearly stepped on a big black snake; he was almost six feet long!  I’m super glad Nic saw the reptile when he did; a snakebite would’ve been a terrible way to end the day.  We didn’t dally in Blackburn long, and soon we were on the road home.  It was a great day full of sights both new and familiar.  It was a real recharge of the batteries for me; soon, we should be in our new home and I can plan my next trip!

2 thoughts on “A Much-Needed Escape”

I don't know if I'll ever have enough photos of this lovely sign. #neon #Tulsa #Oklahoma #Route66
Downtown #Pawhuska as it looks transformed into Fairfax, #Oklahoma for the filming of Killers of the Flower Moon. #OsageCounty #TravelOK
There are some great neon signs in Cheyenne, #Wyoming. Combine that with their wide-open skies and it's a recipe for greatness. #neonsigns #travel #roadtrip
The #neon #sign at the New Moon Cafe in Casper, #Wyoming. Hong Fong Toy immigrated to the US from the Toisan Province in China just after WWII and opened this restaurant in 1961. He sold it in '78 but it's still running today.