(previous installments of this series here)

Saturday got off to a joyously slow start.  I’d slept better than expected, considering the fact I could hear conversation in the next room clear as day.  We didn’t meet up for breakfast until about 10:00 AM.  On the way down, I noticed the station Midway had a bunch of tables set up at one end; the previous day, it was a vast empty space.  Furthermore, the main Grand Hall area was closed off for a wedding reception.  I can’t imagine how much that cost.  I looked at a notice board near the check-in desk and saw the event itself was booked from 6pm to midnight.  Yowza.

After Michael and I enjoyed our meal, I went for a bit of a walk around Union Station.  It was once the world’s largest and busiest depot, hosting 22 different railroads and 100,000 passengers a day.  By 1971, though, traffic was down to only three trains a day & in 1978 the place closed completely.  In the 80s, it was renovated as a hotel/shopping destination.  It’s undergoing more renovations currently, to add a giant aquarium, and a lot of space is under-utilized or closed off.  I saw a few old train cars out back and a kinda sad Hard Rock Cafe.  I did learn that the big fight scene in Escape from New York (between Snake Plissken and a large gladiator-type) was filmed in the abandoned-at-the-time Great Hall, so that’s fun.

The laid back vibe of the day continued when a group of Michael’s buddies arrived for lunch.  They had all gone to Western Military Academy in Alton Illinois, which Michael graduated from in 1963.  They brought a significant amount of delicious barbecue from Pappy’s Smokehouse, which we eagerly devoured. There was a strong bond between these men; their years at that institution clearly made a big impact on them. Gatherings are a somewhat-regular occurrence in some form or fashion and this small group spanned graduating years from the mid to late sixties. At one point, someone asked Michael about the process of recording dialogue for the Cars films. He talked about that as well as his overall involvement with Pixar, including one of his favorite stories about a dinner with Paul Newman.

After a few hours of catching up and reminiscing, the mini-reunion wrapped up; the group hoped to make it out to the book signing Monday night.  After an hour or so of book-related matters, Michael called me to see if I wanted to go out…which of course I did.  We took Glaucus out of the valet stable & snaked through the city.  I learned about the historic and personal significance of many sites, such as the Missouri Botanical Garden and Tower Grove Park.

We ended up on old 66 as we continued to venture away from the city center. We passed by the Donut Drive-In, a shop that had been restored in recent years, and I pulled over to get a shot of the neon sign.  I was surprised that Michael headed for the door even though we’d already decided to get dessert elsewhere. “You’ve gotta have a donut.  It’s non-negotiable.”  The little shop was hoppin’, putting together 21 dozen donuts for a wedding & handling a few other large orders.  We got back into the car and I enjoyed what was probably the best glazed donut I’ve ever eaten.  I was immediately thankful not only that Michael insisted we go inside, but that he bought half-a-dozen for later consumption.

Just a few blocks away, we stopped again: this time, at Ted Drewes Frozen Custard.  It’s not just a Route 66 institution, but a staple of St Louis itself.  “Ted put so many kids through college,” Michael remarked as we looked inside at the flurry of young people working hard to serve the masses.  Michael had a chocolate-covered cone while I took his suggestion and ate a tiramisu concrete, which was delicious.  During our time at the roadside stand, two separate bridal parties arrived and ate frosty delights in full regalia.  It warmed my heart.  We also saw a man in line with a Styrofoam cooler under one arm.  “Now that is a man that is serious about his custard,” Michael said with a smile.

Satisfied with our dinner, we continued to drive around town.  Michael guided me through several suburbs and districts, all the while filling me in on local history and his personal experiences.  He pointed out the former site of the Coral Court Motel in Marlborough, the train station in Kirkwood, Berra Park in The Hill, and more. 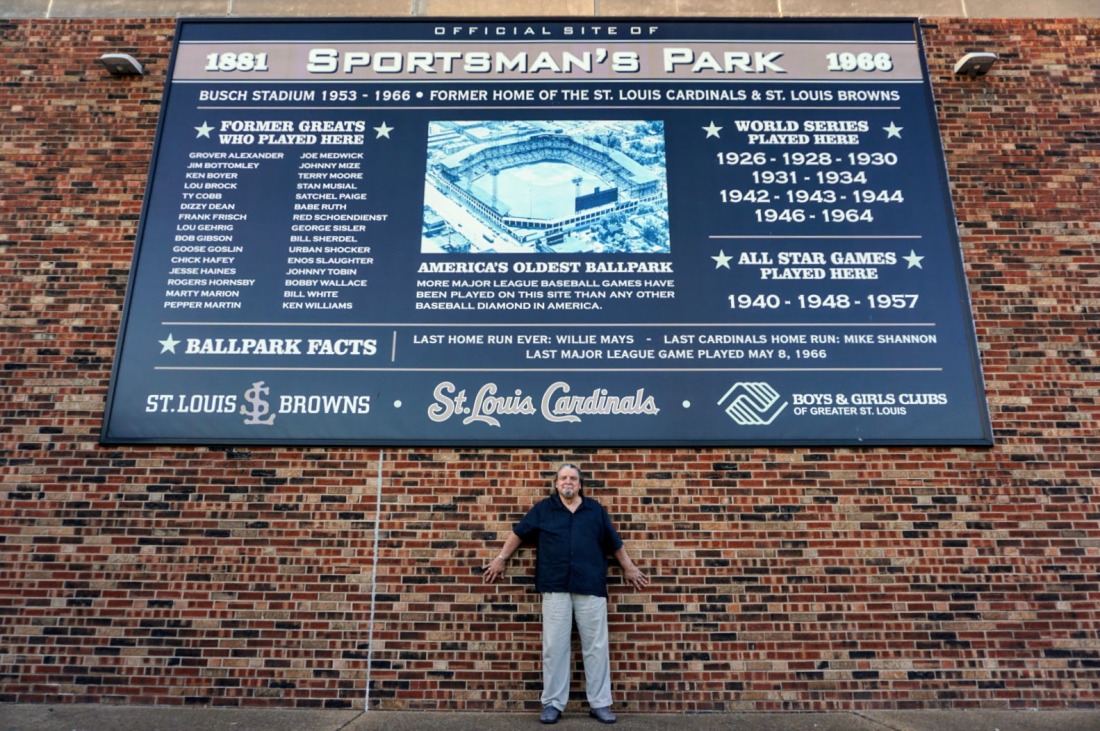 We made a special stop at the site of Sportsman’s Park, the old home of the St Louis Cardinals.  When Michael was in the sixth grade, AAA sponsored an essay contest about what it means to be a school patrol boy. He sat down, with no help from parents or teacher, and wrote an essay.  Several weeks later, Michael found out he won the contest. In addition to a fancy certificate & a small blurb in the paper, he won a trip to a Cardinals game.  A limo took Michael and his father to Sportsman’s Stadium to watch the Cards beat the Cubs.  He got to sit in the dugout between Stan Musial and Kenny Boyer, walking out with a signed game ball. It was dark by the time they headed home; on the way, Michael looked out into the darkness and saw a reflection of his Dad in the window. “It just washed over me, this feeling.  Writing is not a bad thing.  This is a pretty interesting experience. It was then that I decided I was going to be a writer.”

We ended our cruise with a trip downtown, where people on the sidewalks were still celebrating an earlier Cardinals win.  The last light of day faded as we drove next to the Arch, the sound of nearby tugboats churning the Mississippi River.  A great end to another day on the road.

3 thoughts on “On the Road with Michael – St Louis”

The #neon #sign at the New Moon Cafe in Casper, #Wyoming. Hong Fong Toy immigrated to the US from the Toisan Province in China just after WWII and opened this restaurant in 1961. He sold it in '78 but it's still running today.
A beautiful 1965 #Thunderbird on Tulsa's #Route66. #TravelOK #Oklahoma
Approaching Buffalo, Wyoming - the gateway to the Bighorn Mountains. #travel #roadtrip #Wyoming
Congratulations to the Threatt Filling Station & Family Farm in Luther for being selected as one of @savingplaces 11 Most Endangered Historic Places this year. It's an important place with a deep history, as one of the first Black owned-and-operated service stations in the country and what would later be known as #Route66. #Oklahoma #historic