(other installments of this series here)

Sunday was another gloriously slow morning.  I drank coffee & ate the last two donuts from the Donut Drive-In while I looked out my window at the flower bed.  I checked the news, did a little writing, and generally lazed about until about 10:00.  I was pleased to see the Grand Hall lobby had been returned to regular working order after yesterday’s marathon wedding reception.

Michael and I drove to the Missouri History Museum, where we were meeting his sister-in-law for brunch.  We built in enough time to tour the Route 66 exhibit on-site, which I’d heard great things about.  The museum itself is in the Jefferson Memorial, a grand building dedicated to the third President and the Louisiana Purchase.  It was built with proceeds from the 1904 World’s Fair, which was in the same park the memorial is in now.  The building not only houses a grand statue of Jefferson, but a replica of the famous ‘Spirit of St Louis’ airplane flown by Charles Lindbergh.

The exhibit was, indeed, excellent.  It was focused on the Missouri stretch of the road (naturally) and had restored neon signs, remnants of the Coral Court Motel, a few old cars, and a lot of other artifacts.  I was pleased to see the names of friends on placards throughout, thanking them for their donation of items for the exhibit.  Near the end, they had a little bulletin board where people could post their OWN Route 66 stories.  Here’s one:

“I remember just up and taking a bus to California after I graduated college.  I had $128 in my pocket.  Good memories.”

We had a lovely meal overlooking Forest Park before the neon sign presentation.  The presentation was wonderful; Jim Thole featured photography and historic tidbits about neon signs all along the route, from Chicago to Santa Monica.  Afterwards, I enjoyed talking to him and many of the other folks that came out for the presentation, including local artist Jo Ann Kargus, who recently released a Route 66 coloring book!  She was gracious enough to sign a copy for me.  And, of course, everyone loved talking to Michael.  They were delighted to hear about his talk and book signing on Monday night, since just about everyone was local.  (I’m eager to see Left Bank Books myself, as everyone has had wonderful things to say about it!) 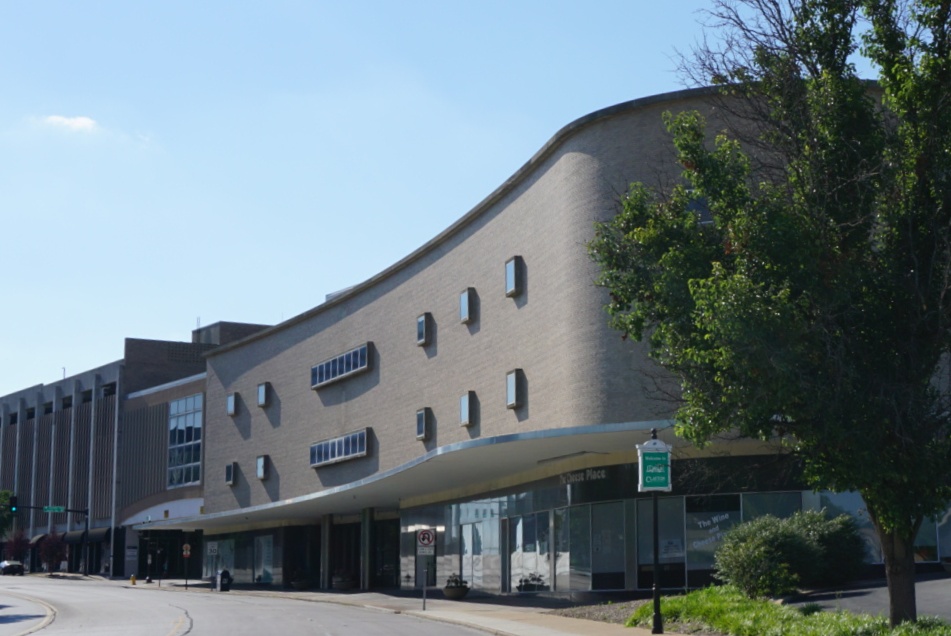 We parted from the roadies at the museum and headed a few miles west, to the seat of St Louis County.  There in Clayton, Michael pulled into the parking lot of a seemingly empty building and told me a story.  Back when he was a boy, no more than 8 or 9, his mother woke him up early.  She had a surprise for him and asked him to get a little dressed up.  She took him down to Famous-Barr (the now-empty department store before us) where there was a crowd gathered.  There, in the flesh, was Hopalong Cassidy with his horse Topper.  Michael shook Cassidy’s hand and even got to pet Topper. Some weeks later, his mother took him down to the same department store in the same fashion and he got to meet the Cisco Kid. The way Michael spoke about these events was touching; they clearly had an impact on him.

A few streets away, we got a drink at the bar top of a little trendy restaurant.  Michael conversed with the bartender about local business development and the Cardinals while I mostly observed.  Michael doesn’t drink anymore (his orange juice/cranberry was stunningly bright next to my porter brew) but that environment is greatly suited to his personable nature.  Throughout the trip I’ve been amazed at how easily people talk to him.  Bellboys, people in the elevator, the homeless, library directors…Michael goes fishing with everyone.  By that, I mean this:  he’ll ask a question.  Something minor and disarming, but designed to get some small personal detail.  He is constantly casting a line out, hoping to catch someone else’s story.  He loves to hear them just as much (if not more) than he loves to tell them.

Imo’s Pizza was our dinner stop (another place full of memory for Mr. Wallis) before we headed back to Union Station.  We both went to our rooms for the night, but, I was a little restless.  I was inspired by the neon presentation given earlier and decided to take our trusty steed, Glaucus, out for a solo ride.  I drove back down Route 66 to capture some neon in the night.  Ted Drewes was a madhouse, but, I sneaked a few photos in before heading back for good.  Thanks for the inspiration, Jim!  If you’re reading this, keep up the great work.

2 thoughts on “On the Road with Michael – St Louis II”