I was talking to a friend the other day and realized a great many folks that I know today don’t know about the international trip that kick-started my love of writing and passion for photography.  After another friend shared a recent Tulsa World article about a couple that did something similar, I thought it might be a good idea to write a summary post (though it did end up rather long) about that experience.  It’s why the blog exists in the first place!

On April 18th, 2009 I waved goodbye to my friends and family and hit the road, heading west.  On February 23rd, 2010 I returned to Tulsa and received the best hug of my life from my waiting mother.  The ten months between those two dates were filled with amazing sights, invaluable experiences, and new friendships.  For nearly a year, I lived out of a backpack and traveled around the world through a dozen countries.

In 2008, my first wife Indi and I reached a tipping point.  Neither of us were particularly happy with life as it was.   I was having what I now call a ‘quarter-life crisis’ and I needed perspective to understand what really made me happy.  She had always wanted to travel, so we decided to sell everything we owned and leave the country.  One estate sale and nearly a year later, we set out with a 55 liter backpack apiece and a plan to travel for two years.  We had a few changes of clothes, two Moleskine notebooks, a Netbook, an iPod, and a few other small items.  After a two week road trip through Texas and the American West, I saw the Pacific Ocean for the first time.  Our new friend Doug took us to Baja Mexico and we had a few days of complete relaxation on the beach before boarding the Hansa Flensburg container ship; next stop, New Zealand.

Two weeks later, we arrived in the port of Tauranga.  One notable event that happened during the voyage:  Here’s a snippet of the blog post from Saturday, May 9th 2009:

Oh, right, one other thing…I got a haircut yesterday. The 2nd mate (Alex) has some hair trimmers and I asked him to give me a trim. He did very well, cut my hair evenly at an 8 (longest trimmer setting) all the way ’round. His English is better than the Chief Officer. Turns out Alex was in the Navy in the USSR just before the fall and has been on cargo ships for thirteen years. Really nice guy. Anyway, he sees a final bit of hair at the front to trim and goes for it. BZZT. Everything stops. Indi, who is watching ahead of me, clasps her hand to her mouth and her eyes widen significantly. Alex, who has been talking joyfully, is silent except for a, “Hmm…” It seems he had somehow accidentally moved the clippers from an 8 to a 1. “We fix it, ya? No problem,” he says as I am further shaved. 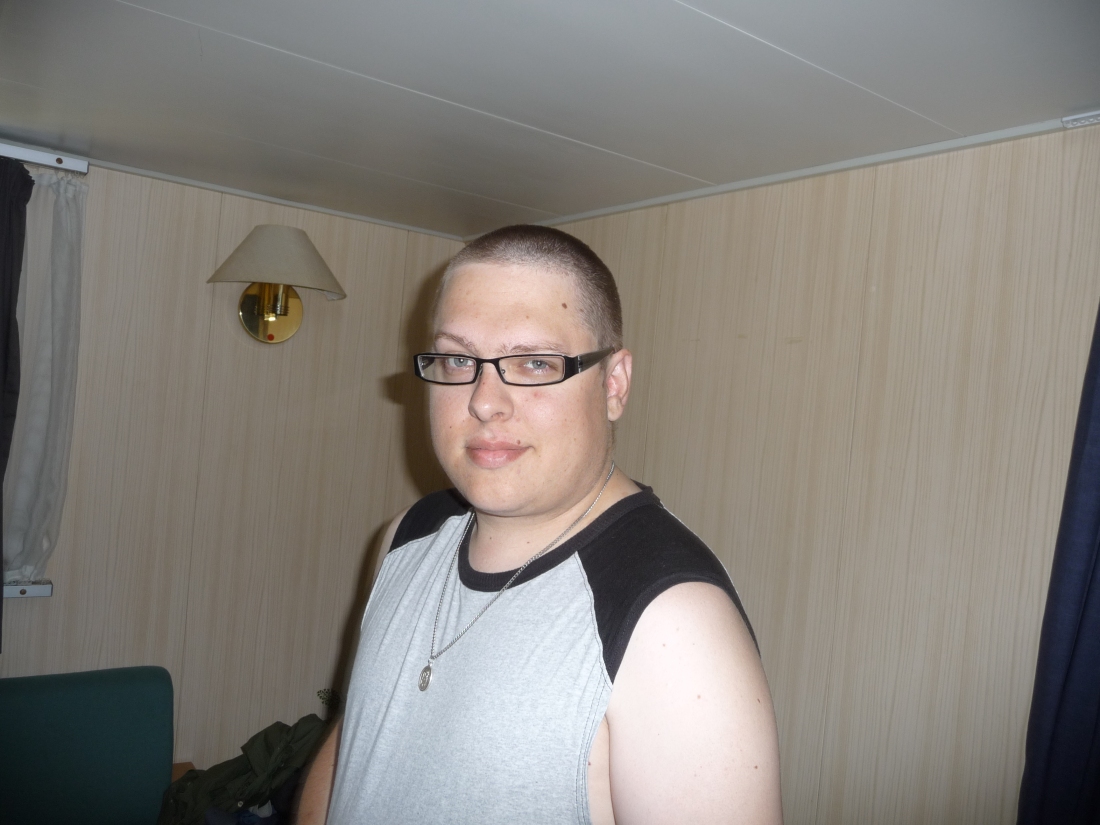 So, I arrived in the Land of Middle Earth with a totally shaved head.  Over the next few weeks I saw many points of interest across the north island of the country:  the geothermal sites of Rotorua, Lake Taupo and Mt Ngauruhoe (from a helicopter!), the capital city Wellington (where we had our first Couchsurfing experience & visited Weta Studios), the Art Deco of Napier, and an amazing closing few days at Piha Beach.  Winter was coming, and we didn’t want to buy a ton of cold weather gear right before flying to Southeast Asia, so the south island was saved for another trip.

Onward to Indonesia, where the culture shock of Bali knocked me for a loop.  I wrote more about that here, but suffice to say I had a bit of an adjustment period.  Had we not Couchsurfed with someone right out of the gate (allowing me to learn customs and the pace of life from an understanding local) I would’ve had an even tougher time adjusting.  The dirt roads and rice paddies were stunning; I took a day trip with a few other travelers into the Indonesian countryside and experienced the first non-Christian religious sites I’d ever seen with my own eyes.

After eleven days in the towns of Kuta and Ubud, Indi and I separated.  Not permanently (that would happen in late 2010) but so we could experience the country as solo travelers and better find ourselves.  It was an idea that Indi had brought up even before we had our estate sale.  I agreed and spent time on the beaches of Lovina while she traveled on to the next island, Java.  Though we planned our solo journeys to take more than a month, the split only lasted about two weeks due to harassment Indi received in Cirebon as a solo female traveler.  By the time we both reached Jakarta in mid-July, we were happy to leave Indonesia in our rear-view mirror.  We didn’t travel separately again for the entire trip.

Malaysia remains at the top of my list when it comes to favorite travel experiences.  Over the month-and-a-half I traveled through the country, I was able to:

Malaysia just had a lot to offer.  That’s also where I upgraded my camera to a Canon G10.  The next destination was Thailand, which was the only country where our travels were largely dictated by a tourism company we booked travel through.  Though I often recount my time in the country as my least favorite, I have a wealth of memories.  I spent a great week with a group of Irish travelers on the island of Ko Samui while Indi went to a detox retreat in an attempt to quit smoking.  I toured Phang Nga Bay, which included the island where parts of the James Bond film “The Man with the Golden Gun” was filmed.  I broke several toes in a slip-and-fall while trying to kill a millipede the size of a garden hose in our chalet on Ko Phi Phi Island.  The sound of the ocean was never far away in the places we stayed.

Cambodia was full of the friendliest people.  Most of the folks I met were very poor, but they were rich in spirit.  We spent days touring the Angkor Wat temple complex in the north part of the country and then a week volunteering at an orphanage in the Takeo district, where we met many other backpackers from all over the world doing the same.  We toured the Killing Fields and the Tuol Sleng high-school-turned-prison used by the Khmer Rouge in Phnom Penh.

After Cambodia, we flew to Japan. It was around this time that we made the decision to sacrifice the quantity of days traveling with the quality of the time we were spending abroad.  This decision is what lead to the trip ending at the ten month mark rather than our original two year estimate.  It was the right decision.  The six weeks spent in Japan was a real highlight of the trip for me.  We stayed at a dorm-like building in Osaka and took the trains to Obama, Hiroshima, Kyoto, and Tokyo.  I very much want to re-visit the Land of the Rising Sun to see more of their beautiful landscape and experience more of their culture.

After celebrating Halloween and Thanksgiving in Japan, we flew to Italy.  Our time there lasted little more than a week and we rushed through Rome, Florence, and Venice before heading to Paris.  We met up with Indi’s uncles and spent a few days touring the city (and the nearby palace at Versailles) before a long stay in Prague, Czech Republic.  Christmas was spent in a flat with another ex-pat couple, just a few blocks away from the Old Town Square.  I celebrated New Year’s by standing near the Charles Bridge over the Vltava River, marveling at the fireworks I could see in all directions.

It was about time to start planning for home.  The last month of the trip took us to Ireland, England, and Wales.  I can still feel the air on my skin as I walked the country lane from the Irish town of Doolin to the Cliffs of Moher.  I can taste the steak-and-ale pie in Camden and hear the laughter of Roo, the nice man that we couch surfed with in Cardiff.  I could write so much more, but, this post is already quite long!  Maybe I’ll feature specific throwback posts on here from time to time.

I arrived back in the US in Chicago, where the same friends that had accompanied us to California met us and ferried us home.  I’d lost 60 lbs and gained so much.  As I mentioned earlier, that hug Mom gave me when I walked in the door is like none I’ve ever received.  Although my first wife and I split some months after, I’ll always be thankful for her urging to leave; it made a huge difference in my life, as you can imagine.

Thanks for taking this look back with me!  I hope even those that have followed me ever since the day I left the States enjoyed this retrospective.  This travel blog was originally created to catalog that international trip; if you’re interested in more details, all of the blog posts that were written during those travels are archived on this site.  Simply use the date selector on the side of the page to go back into 2009-2010 and read more about my journey.