Wednesday was another beautiful day at the Jersey Shore.  After breakfast, our group went back to the beach.  We spent all morning enjoying the sun & sand.  Samantha and the kids made a ‘drip castle’ while others took long strolls along the water’s edge.

Sam pointed something out to me I found fascinating.  I noticed that the water brought a lot of tiny shells in with it, but I hadn’t realized that these were actual living creatures.  She showed me that they were burrowing back down under the sand as soon as the water receded.  Check it out!

Shortly after lunch, a few of us separated and left Sea Isle City.  The whole group planned to meet in Ocean City later in the evening, but not everyone was interested in going to Margate, a town situated on the southern edge of Atlantic City.  I had the opposite reaction:  I was more excited to visit Margate than just about anywhere else on the entire trip! This was due to its most famous resident, Lucy the Elephant. 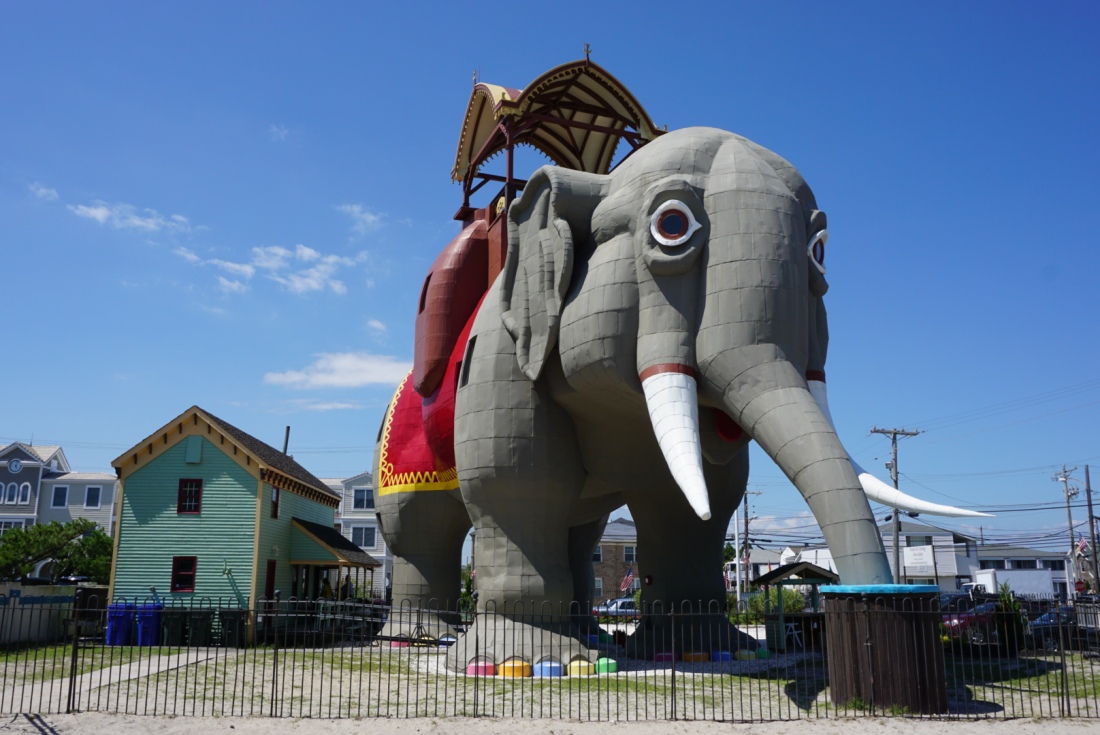 Lucy is America’s oldest roadside attraction, having been constructed in 1881.  It’s a 65-foot-tall wooden pachyderm covered in tin sheeting.  She was originally built to bring in visitors and property buyers to the growing beach community.  The belly of the beast is a series of rooms, accessible via staircase in the back legs.  In addition to being a tourist attraction, it served for a time as a real estate office and a speakeasy.  In the summer of 1902, a family even rented Lucy as living quarters; an antique miniature bathtub still sits in a side room over the front-right leg. 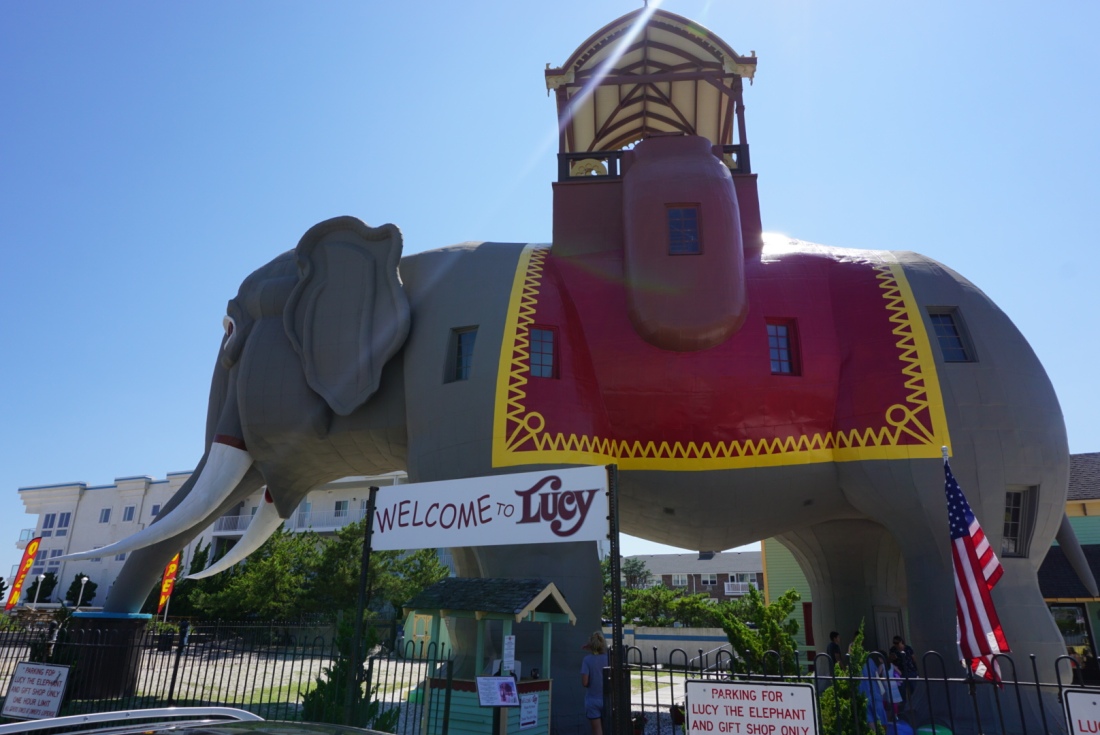 The original owner sold her after only six years, but the Gertzen family bought her and owned her until 1970.  At that time, it was transferred to a ‘Save Lucy’ Committee due to threat of demolition.  It had severely deteriorated and the land it sat on was sold to a condominium developer.  The city donated a nearby parcel of land (about 100 yards away) and the committee was tasked with moving the 90 ton structure with only a 30 day window.  It must’ve been quite a sight to see the mammoth beast being towed down the street; to everyone’s delight, it made the journey in one piece.  After an extensive renovation, it re-opened to the public and was designated a National Historic Landmark during the nation’s bi-centennial celebrations.

When we arrived at Lucy, I immediately started buzzing around her with my camera.  The rest of the crew (Mom, Samantha, her mom, & niece) sat in front of the gift shop and waited for the next tour.  Lucy’s toenails were painted beautiful pastel colors; I later learned that she gets a ‘manicure’ every summer for her birthday.

When the tour started, we ascended a narrow spiral staircase in the back-left leg.  The main room in her belly was beautifully restored, with wood paneling and ornate banisters.  A television played a short documentary on Lucy’s history and I peeked into a few of the side rooms.  I could even see the shoreline through her right eye.  It was easy to see how she survived multiple hurricanes and her relocation; her wooden husk was built like the hull of a great ship. 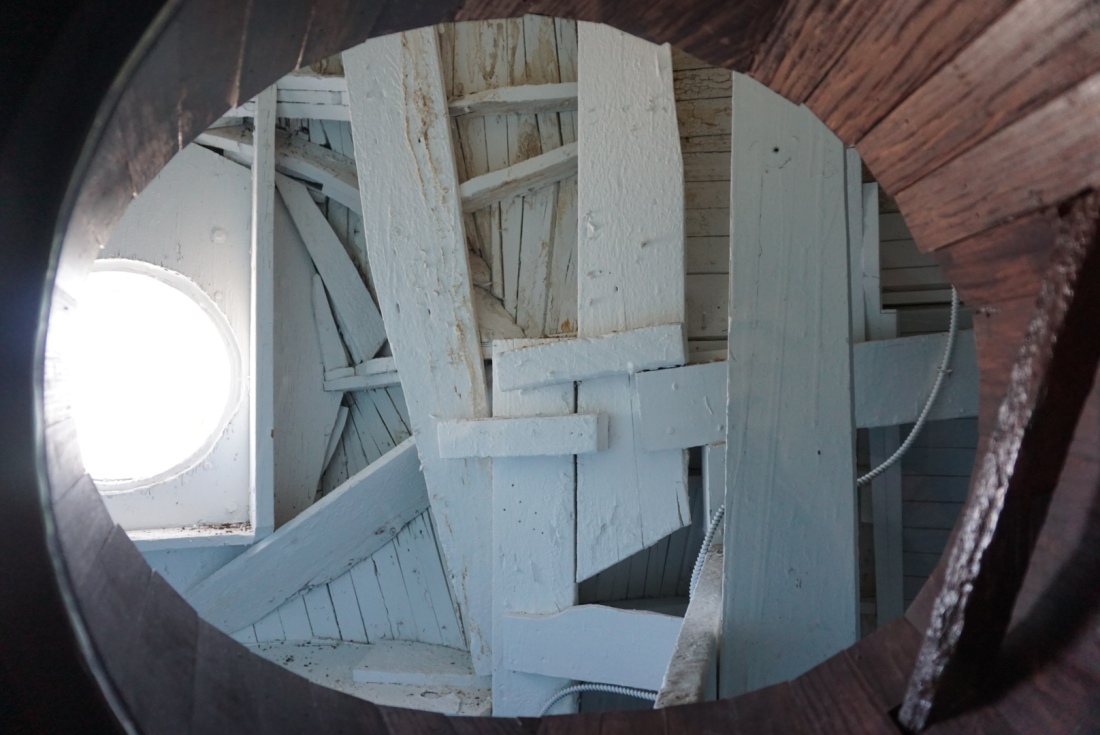 There was another staircase that led to the howdah, or the riding canopy on Lucy’s back.  The view was amazing.  I could see how valuable this perch was to the original builder, who used it to showcase his properties along the shore to potential buyers.  I am so thankful for the tireless efforts by so many to restore this wondrous attraction.  If you’re ever near Atlantic City, take the short drive down to Margate to see her!