While researching my upcoming book about Lost Tulsa Restaurants, I came across a decades-old article about a Tulsa burger institution that is still going strong in the 21st century.  It’s one of my all-time favorite local burger joints, Claud’s.  I got a kick out of it and thought you all might enjoy it, too!

Hamburgers were invented 80 years ago at Louis Lassen’s Lunch in New Haven, Conn., according to “Roadfood,” a guide to regional restaurants. Some rowdy sailors from Hamburg, Germany, contributed the name, the story goes.  Today the building that housed the tiny restaurant is a New Haven landmark and Louis III still broils the same style burger and serves it on toast with cheese, Bermuda onions and tomato. (2017 Edit: not so fast, Connecticut!  A burger needs a bun, not toast.  Here’s a little more about the invention of the hamburger as we know it…)

Claud’s, 3814 S Peoria Ave., came along 54 years later and it’s part of a fading genre – a family owned hamburger restaurant that has survived the competition of fast food chains.

Claud’s has a counter with 12 stools, a big carry-out business and a clientele that includes both truck drivers and Mercedes owners.  The hamburger, now a national institution, is the great leveler. “That’s what I like about it,” owner Claud Hobson admits.  “I see people every day from every walk of life and every educational and income level.”

“His hamburgers are the old fashioned greasy kind you hardly ever find anymore,” one loyal customer explained. Hobson thinks she means “juicy” instead of “greasy.”  He takes pride in buying good grade chuck and grinding it without removing any fat.  That adds flavor and moisture, he believes.

We visited Claud’s the day after Thanksgiving and his plain cheeseburger tasted wonderful after a surplus of rich holiday foods.  We were lucky to find two adjoining seats, but customers were soon standing behind us waiting to be seated.  It’s fun to watch the fast moving production line at work in the narrow cooking space.  Hobson has the meat patties stacked to his left, buns in a stainless steel box and the cut French fries under the counter behind him.

When a patty “hits the grill” he sprinkles it with salt and nothing more.  No fancy seasonings.  The bun halves are warmed on a separate section of the grill and the finished burger is passed on to his son Larry who covers the bun generously with mustard and garnishes it with a pickle and onion slices.  He also sacks orders for carryouts.  Another son, Clifford, comes in early to order food “to set up.”  Everybody knows his job and nobody crosses over unless an emergency occurs, Hobson said.

Patties are thin and Hobson presses them down with a pancake turner.  This isn’t a California style kitchen and you needn’t expect hamburgers to be topped with everything from avocado slices to bean sprouts and piccalilli.  Hobson will “work with the customer” and you can have onions cooked with the meat, a tomato slice and mayonnaise instead of mustard, if you insist.  But never lettuce.  “I respect people who like lettuce, but it chances the taste of a hamburger,” Hobson said.

The plain hamburger is 85 cents, a double meat burger, $1.65 and a cheeseburger, $1.05.  Even if you like thick burgers with all the extras, you’ll find Claud’s hamburgers delicious.  French fries have a fresh taste and the creamy coleslaw, made from a family recipe, has a slightly sweet flavor.  Hobson once was a cook for Bishops, a restaurant fondly remembered by longtime Tulsans.  He opened his first hamburger place in 1954 at 6102 E Admiral Place and moved to his present location in 1965.  Claud’s has stainless steel equipment, freshly painted white walls and a neat look.

37 years later and the Claud’s I know is exactly the same.  Here’s a snapshot of another article I found, dated almost a year later (10/8/1981).  Thankfully, the stools were replaced at some point after. 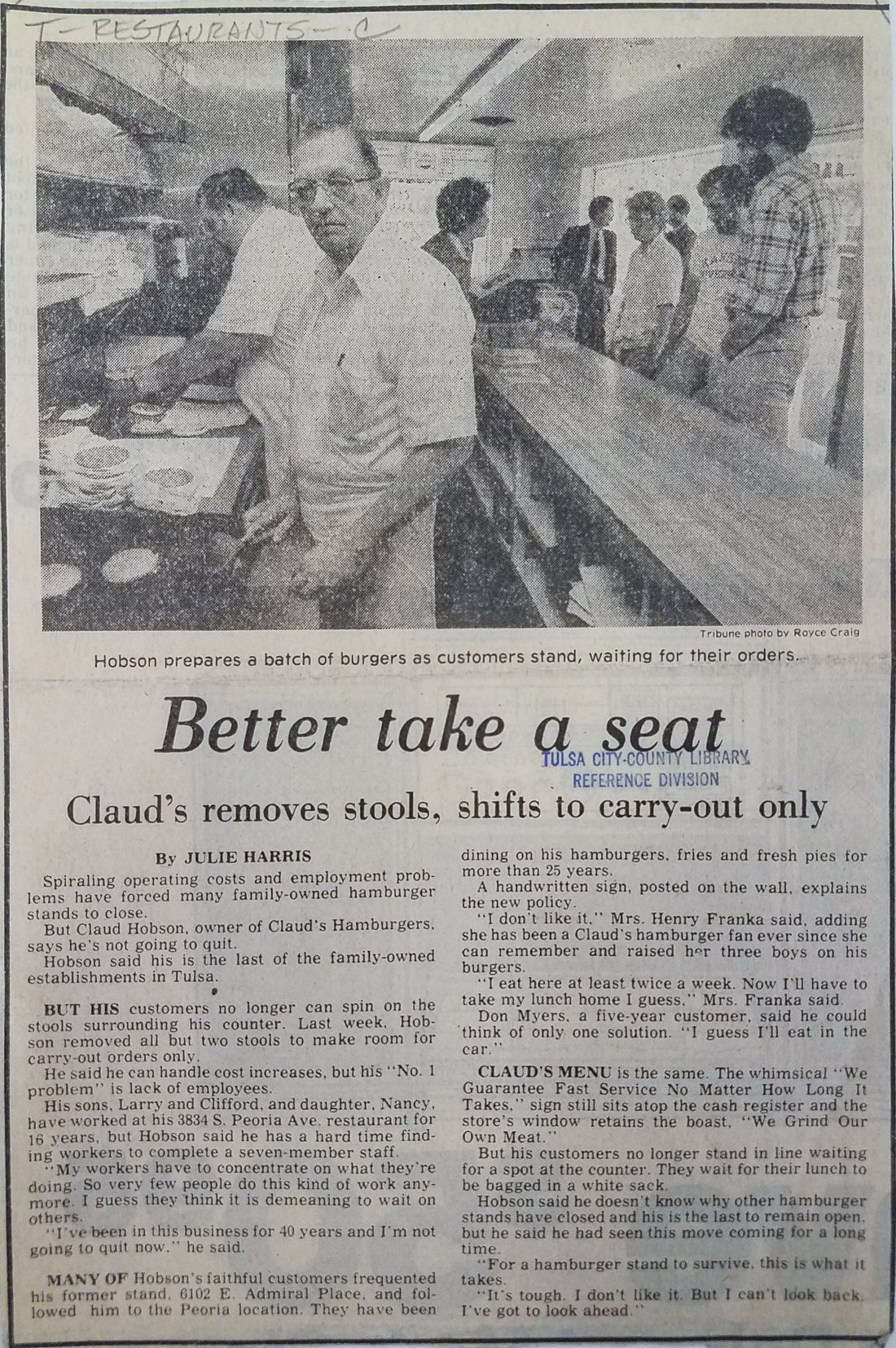