When Samantha asked if I’d like to tag along with her to New Orleans, where she was to attend an event planning conference, I said sure.  I’d never been to the city before (or Louisiana as a whole, actually) and was excited for the experience.  What I didn’t expect, however, was for the city to feel like a completely different COUNTRY.  Before I got to experience New Orleans, of course, we had to get there. 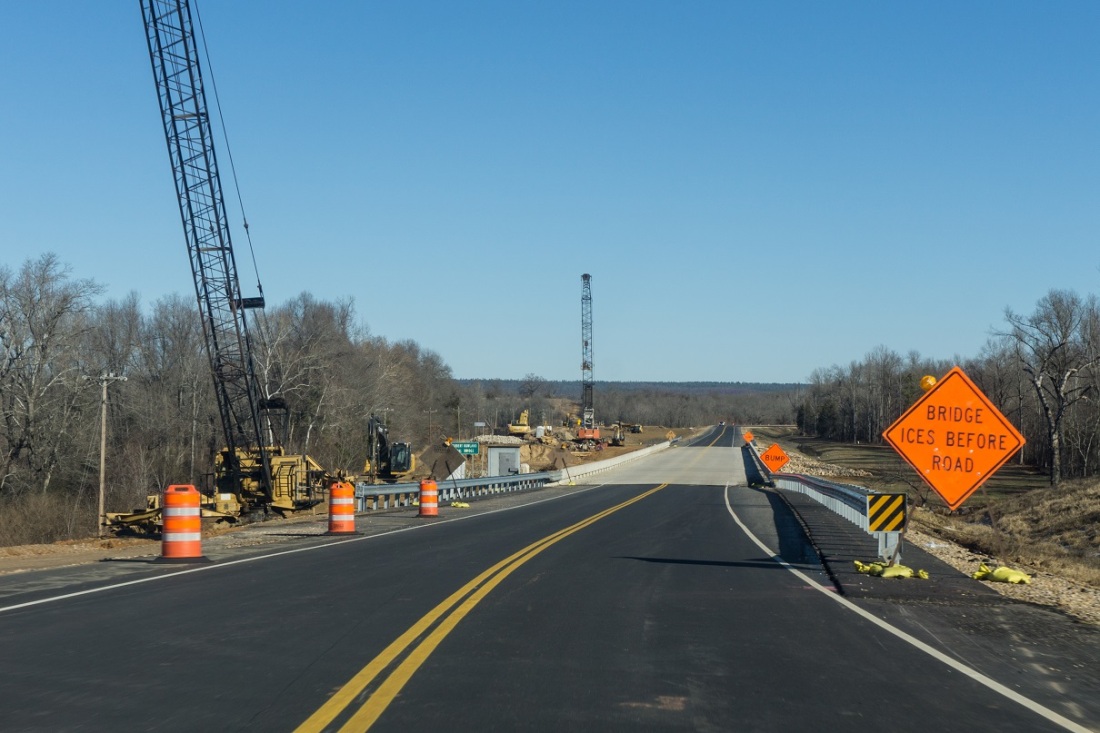 When we opted to go together, it was decided that driving would be our best option.  Not only is that better from a cost perspective, but that meant I could map out a two-day journey with various stops.  We could make it from Tulsa to New Orleans in a single day, but that would be a boring drive.  There was plenty to see along the way!  The first place I’d marked was in Antlers OK … which was a disappointment.  The historic bridge I’d wanted to see had JUST RECENTLY been torn out; in fact, the old steel from the span was still piled on the side of the road next to the new crossing.  I was heartbroken that I was too late. 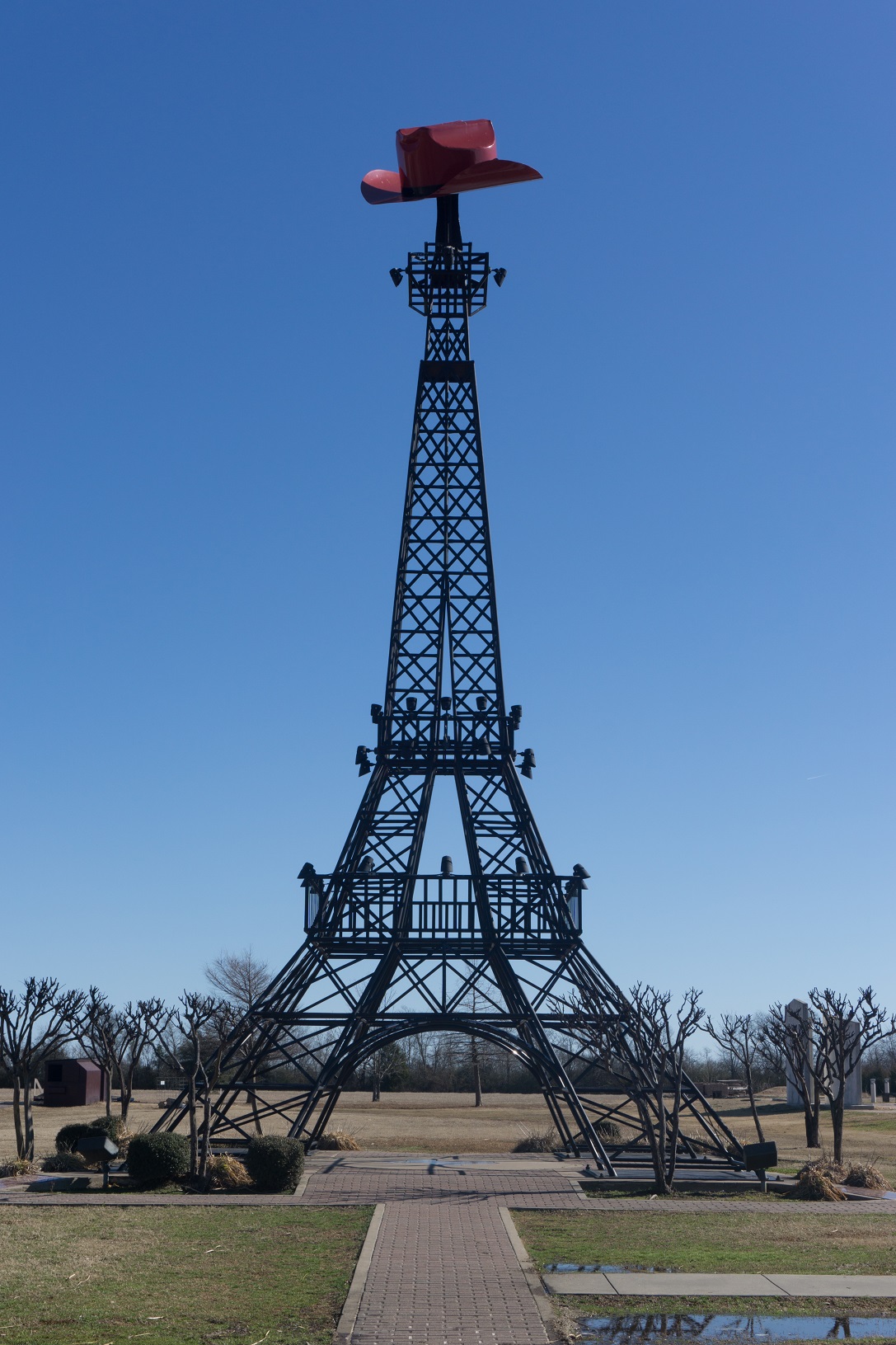 We stopped briefly in Hugo (where I showed Samantha the circus cemetery) before we entered the Lone Star State.  We checked out the little Eiffel Tower in Paris TX, built in 1993 at 65 feet tall.  When Paris, Tennessee built their own tower at 70 feet tall the citizens in Texas added a cowboy hat in ’98.  Although the faux-Eiffel in Vegas dwarfs all other US replicas, none of the others have a hat.  So there’s that. 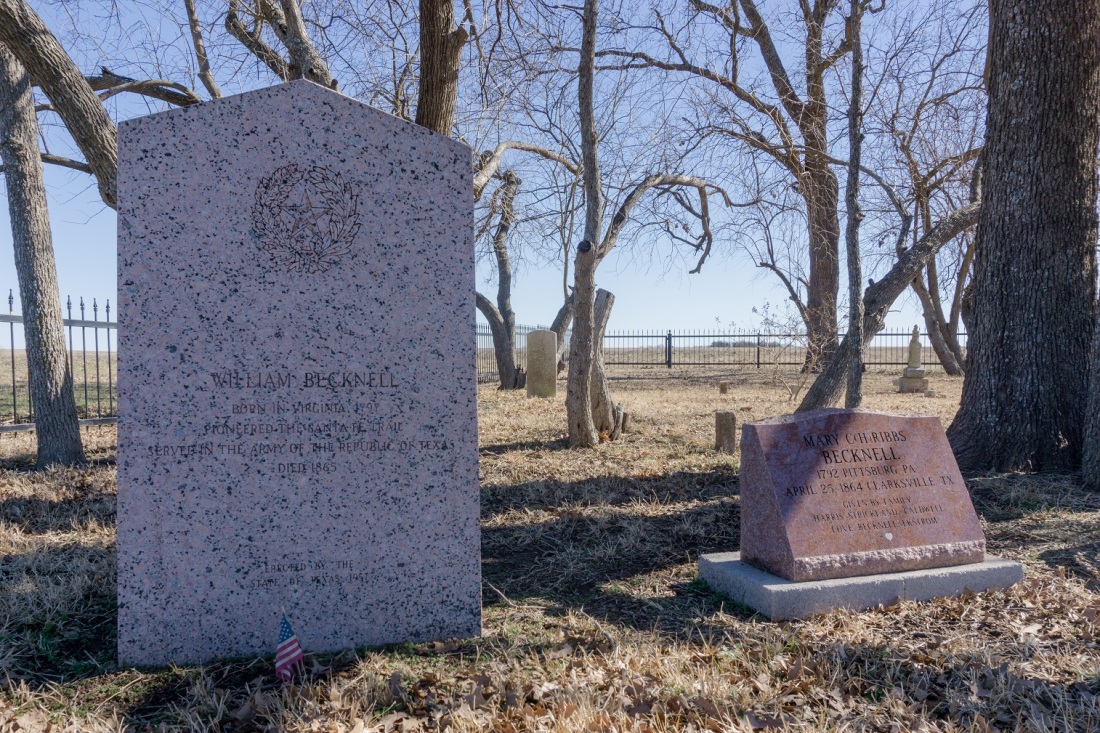 Heading east on Highway 82, we drove past a historic marker next to the road.  I wasn’t going to stop, but something in my brain nagged me and we turned around.  I’m thankful that we did!  The marker was at the gate of a small cemetery for William Becknell, the pioneer that blazed the Santa Fe Trail before settling in Texas. 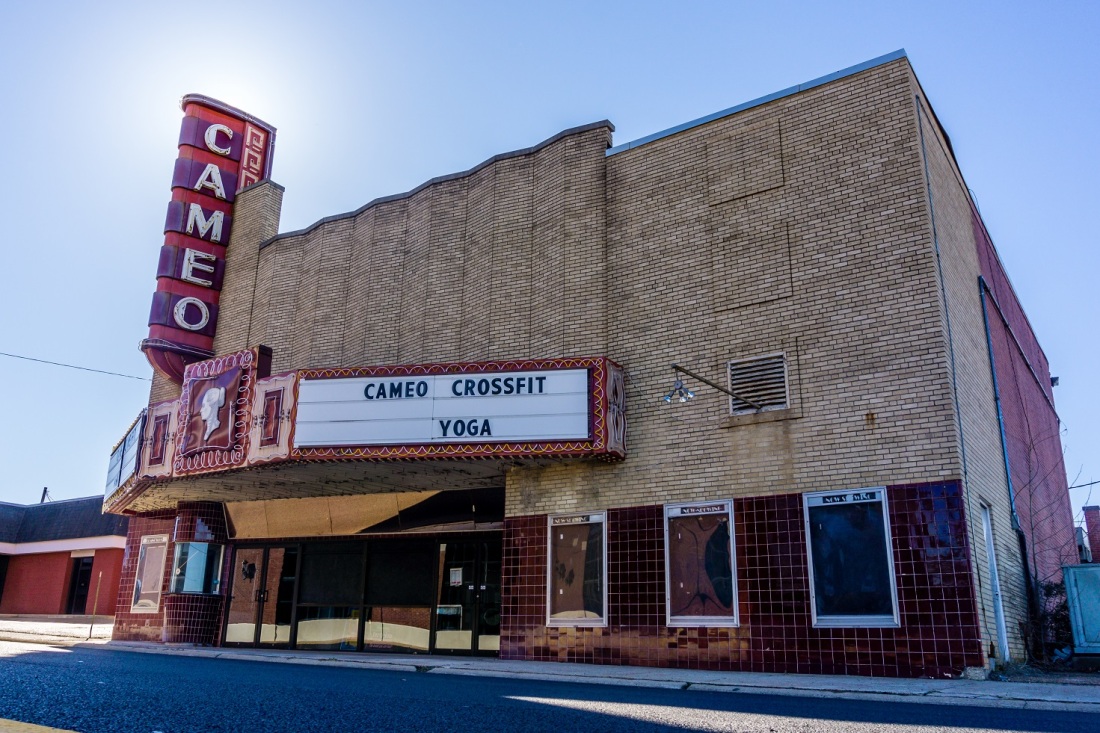 Our next destination took us a bit farther east into Arkansas.  An old theatre in Magnolia had been on my to-see list for quite a long time and it was one I had wanted to see with Samantha by my side.  It’s the Cameo Theater, which no longer operates as a movie house.  She uses cameos often in her hand-crafted jewelry and I knew she would really like it.  It’s a beautiful cinema and a shame that it’s closed — though at least it’s being used as an exercise studio, apparently. 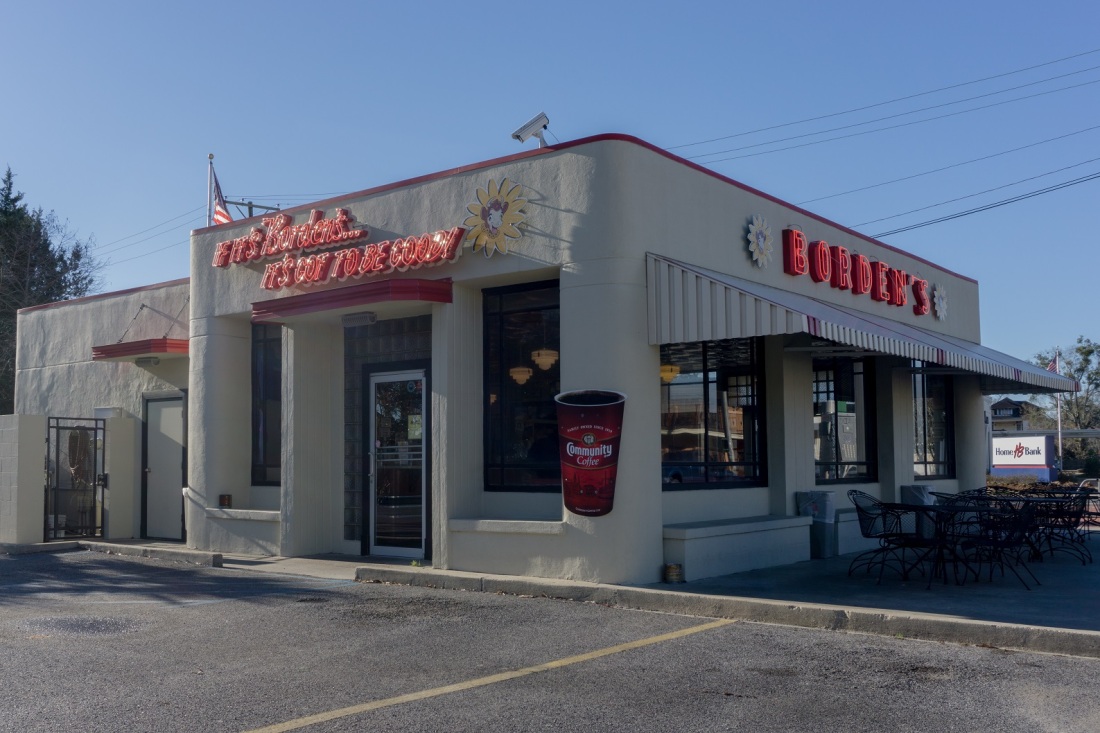 We meandered down to Lafayette, LA before calling it a night.  We didn’t go straight to the hotel, or even to dinner actually.  We headed for dessert first and another surprise for Sam:  the last operating Borden’s Ice Cream Shoppe in existence.  Back in the mid-1800s, Borden’s Dairy (Eagle Brand then) built a factory in her home town of Brewster, NY for their condensed milk operation.  It closed in the 1920s after the area was flooded to provide reservoirs for NYC water supply and later burned to the ground in a fire, but Borden’s was a big part of the city’s story.  As such, she’s always felt a historic connection to the brand. 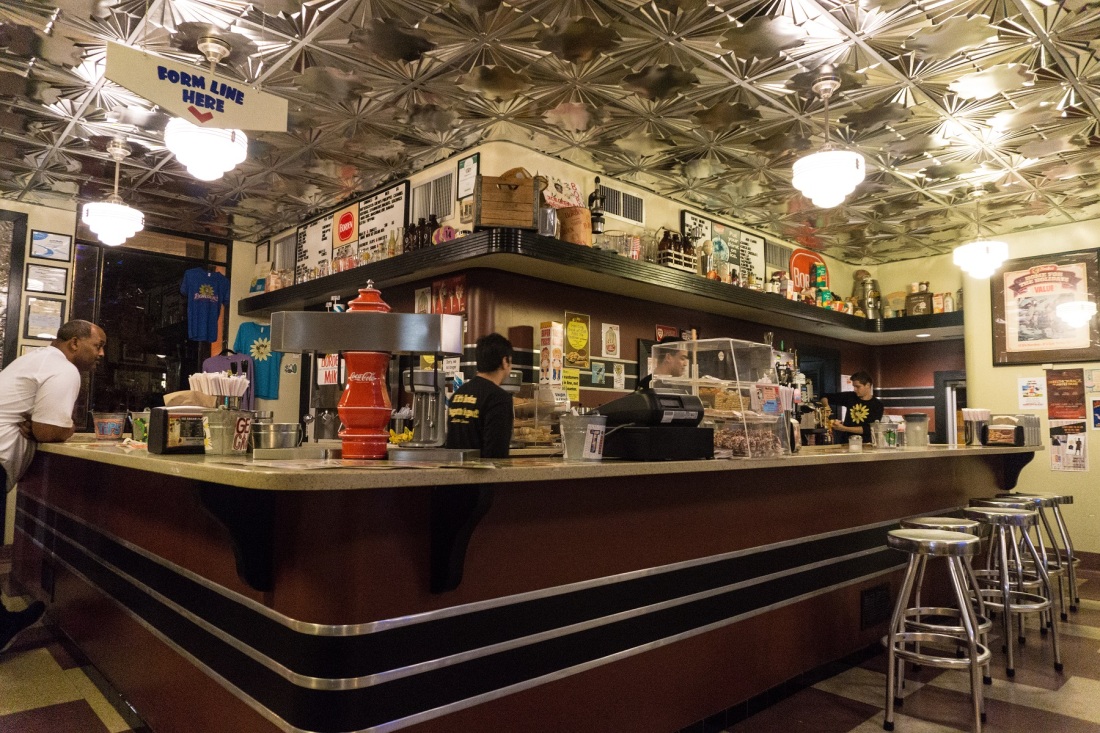 The Borden’s Ice Cream Shoppe in Lafayette was built in 1940.  In 2009, long-time customers bought the shop, renovated it, and kept it going.  The landmark building looks like you would hope:  neon on the outside, pressed-tin ceilings and Art Deco lights on the inside.  There was an old-fashioned counter, several booths, and a number of small kid-sized tables.  The menu board was simple and we ordered with ease.  If it’s Borden’s, it’s got to be good — and it certainly was.

After a long day on the road, it felt good to stretch out — we fell asleep at our motel quickly, knowing that the next day’s drive to New Orleans would be much shorter.  And then the real adventure would begin…

2 thoughts on “Road to the Bayou State”