It’s been a busy week on Route 66 in Tulsa and the surrounding area.  I love a good road trip to someplace new, but there’s a lot to be said for helping others enjoy the city and stretch of highway I am most familiar with.  Tulsa has an embarrassment of riches when it comes to our architecture and history.

For most of last week, Tulsa hosted the NCPTT (National Center for Preservation Technology and Training, part of the National Park Service) and their symposium on Preservation of Roadside Architecture & Attractions. I joined approximately 50 other attendees from around the country to learn about various efforts (both historic and ongoing) to preserve, restore, and bring awareness to various roadside relics.

I heard from a man who helped restore the 9,000 sq ft terrazzo Texaco highway map of New York State from the 1964 World’s Fair.  I listened to talks about Dinosaur Valley State Park, Oklahoma City neon signs, old Phillips 66 stations in the Midwest, Civil War-era cycloramas, various marketing initiatives, and more.  Our two keynote addresses were from author/historian Michael Wallis and Dylan Thuras from Atlas Obscura.  I gave the last talk of the conference, highlighting photography as a preservation tool.  I learned a lot and made many new friends over three days.

I also lead two field excursions during the conference.  The first trip was a neon tour of Tulsa.  We only had two hours, which meant I had to make some tough decisions on what we could see.  Aside from the fact that our final stop was a great disappointment (Stokely Event Center had assured me they’d be present with all their beautiful signs lit up, but the place was dark when we arrived) it was nice to share some of our beautiful signage with a passionate crowd.  The second tour was a half-day trip from Tulsa to Foyil, OK to see a bit of the Mother Road.  Everybody loved the Blue Whale and Totem Pole Park!  Photos from those trips are below: 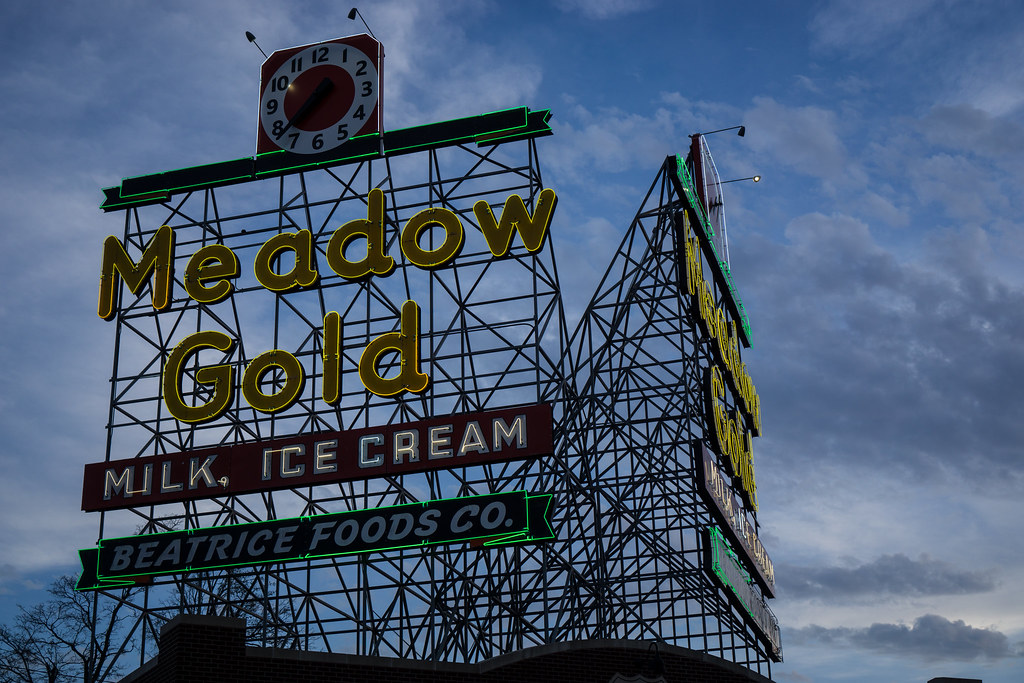 On Saturday, I hopped back onto Route 66 for a different reason: commemorating the 90th Anniversary of the Bunion Derby.  If you’ve never heard of it, I recommend reading the whole story but the summary is this: it was a 1928 Trans-American Footrace from L.A. to New York that was won by a 20 year old Cherokee man from the Claremore area named Andy Payne.  The Oklahoma Route 66 Association has held occasional motorized relays to celebrate the event.  A plaque is carried from the western border with Texas all the way up to the Kansas border on the historic highway.

I carried the plaque from downtown Sapulpa, through Tulsa, and up to the Blue Whale in Catoosa. I was joined by a few other enthusiasts on a cold morning with Samantha riding shotgun. When we arrived at the Blue Whale, I was shocked to see a massive caravan waiting to drive the next leg of the journey…complete with police escort!  I fell in line once the plaque hand-off was completed and stayed with the gang through Claremore (where the Cherokee Nation read a proclamation to one of Andy Payne’s nephews) and on to Foyil, where a statue of Andy Payne graces travelers on the side of Route 66.

The last week was full of fun and learning.  It was a real treat to be involved with both events and I think our visitors really enjoyed Tulsa. I marked a whole bunch of new locations to visit around the country, too! It’s time to start planning my next road trip.