When I woke up early on Sunday, I was eager to get back on the road.  The EconoLodge in Hays, Kansas was fine, sure, but why lie around when I could be out exploring?  Besides, it’s cooler in the morning. However, I was shocked when I walked outside and discovered it was only 58 degrees.  I had dressed for the blazing afternoon heat!  My coffee served as a wake-me-up AND a warm-me-up as I hopped on the interstate and headed east. 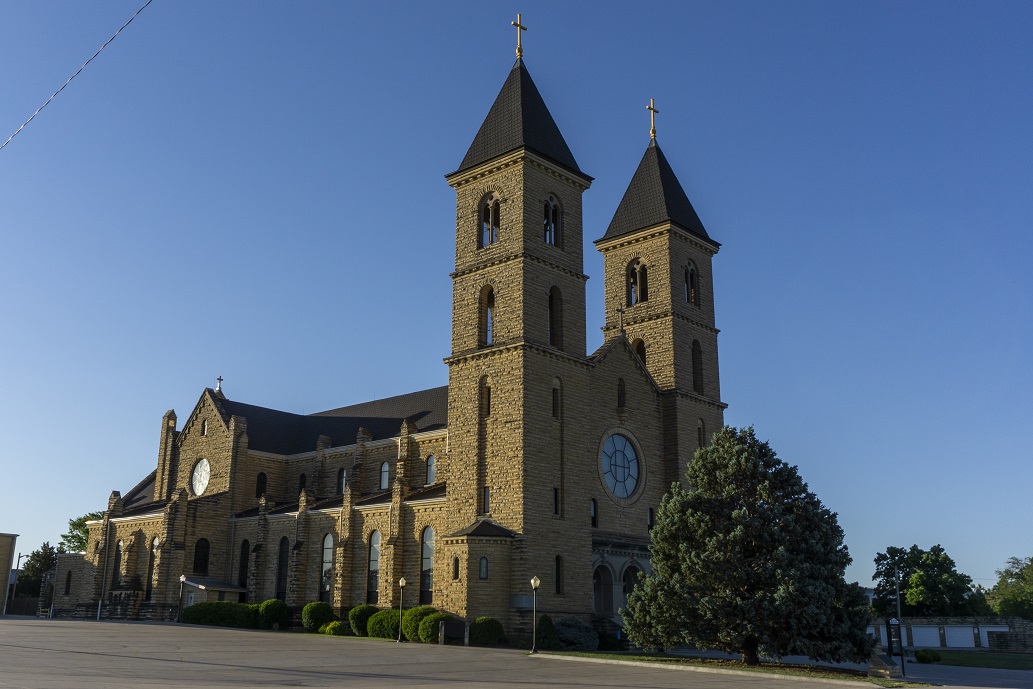 My first stop was not far away at the Cathedral of the Plains in Victoria. Technically, it’s called the Saint Fidelis Catholic Church…and since it’s not the home of a bishop, it’s not even a cathedral.  But in 1912, William Jennings Bryan gave it the grand title that has stuck to this day.  Although it was Sunday morning, it was still quite early.  The congregation had not yet stirred and I had the streets to myself. 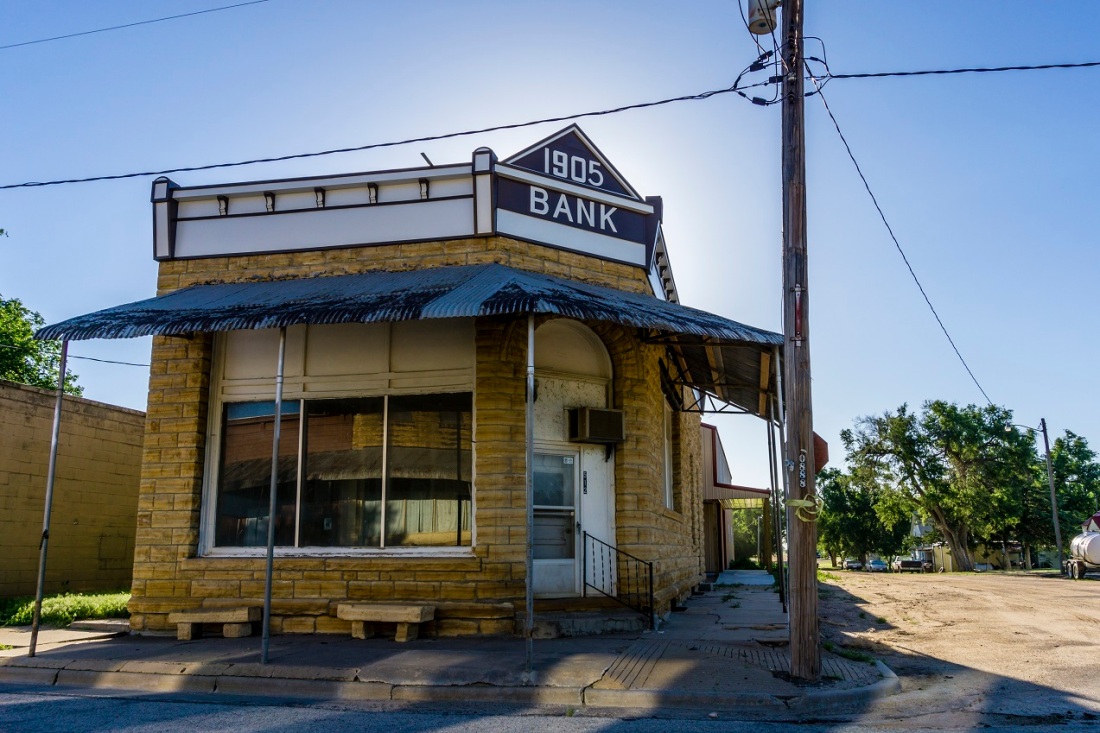 I didn’t have a very defined route for the day’s travel, but I had plenty of Google Maps markers to guide me down old US 40. I weaved through several small towns like Russell and Dorrance…I doubted my early visitation had anything to do with their empty streets.  By the time I arrived in Wilson, I could finally see signs of life.  A shopkeeper was tidying up her storefront, a couple talked over coffee in front of the Midland Hotel, and the little gas station diner had a full parking lot. On the east end of downtown, I was surprised to discover a giant colorful egg in a little plaza.  I investigated. 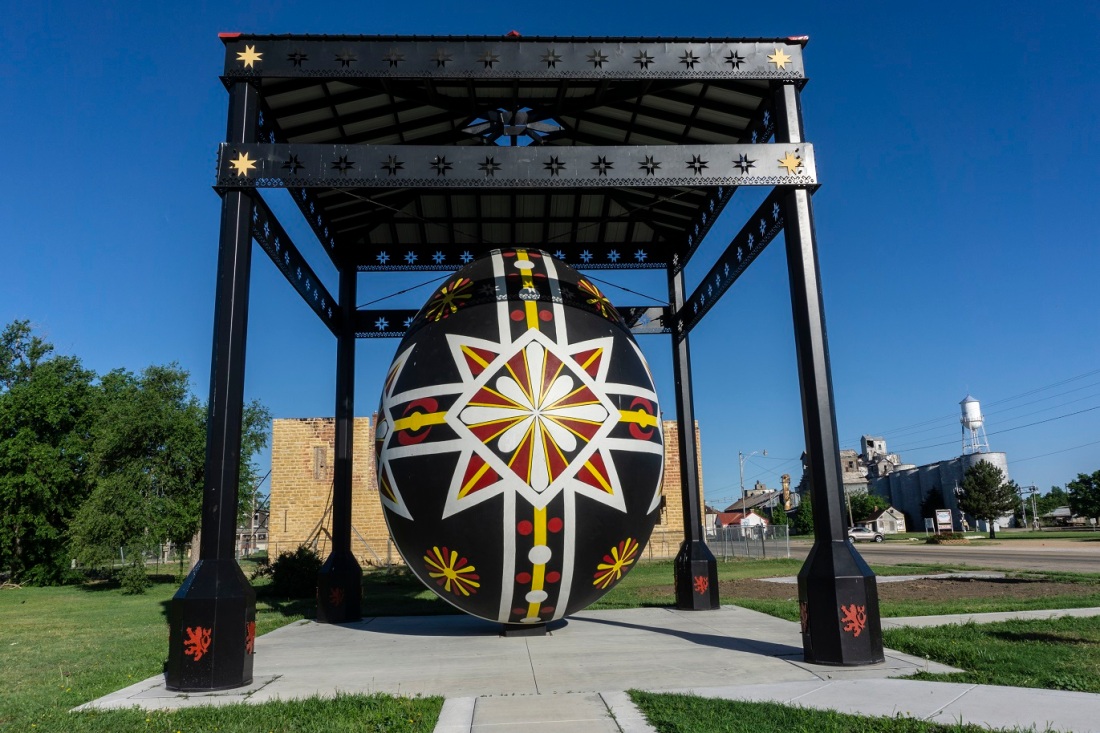 Wilson is known as the Czech Capital of Kansas. In the 1870s, a group of immigrants settled in town to work on the railroad and brought their culture with them. There’s a big festival every summer and the World’s Largest Hand-Painted Czech Egg.  It’s 22 feet tall!  The Midland Hotel across the railroad tracks was used for filming in the 1973 film Paper Moon.  That’s a lot for a town of less than 1,000. 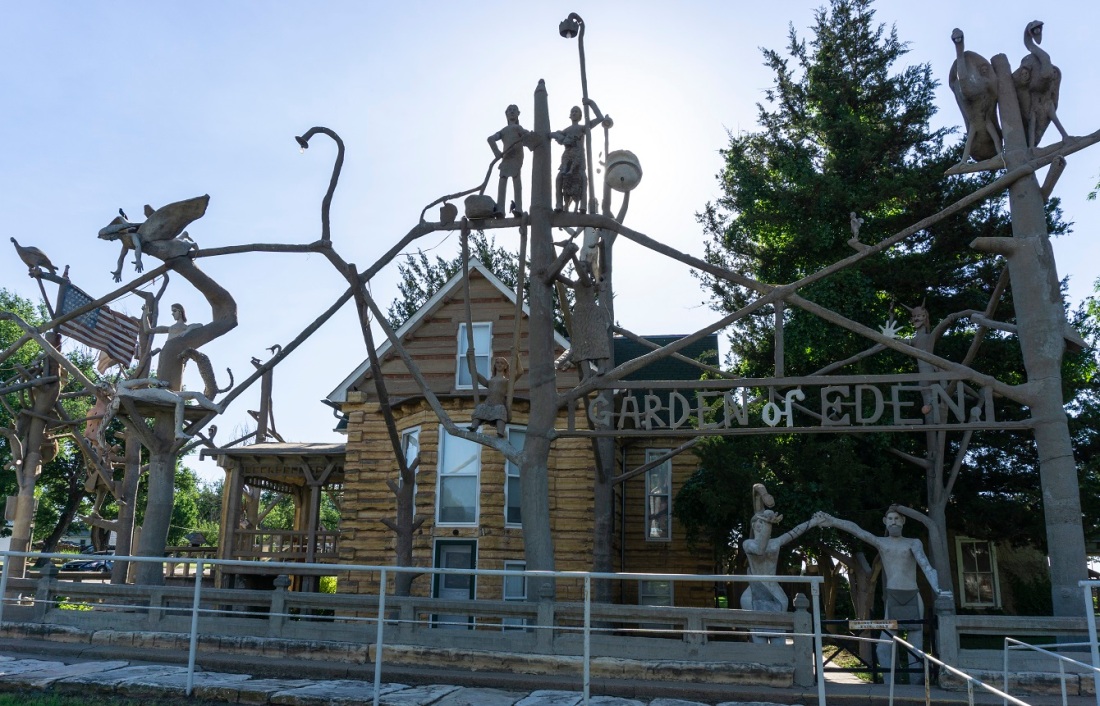 From Wilson, I briefly detoured north.  After a lovely drive through the rolling hills surrounding Wilson Lake I arrived in Lucas, home of S.P. Dinsmoor’s Garden of Eden. Samuel Dinsmoor was a Civil War veteran that became something of a social commentator through his art, which decorates the land around the cabin he built in the early 1900s. For twenty years, he built a sculpture garden that represented what he considered the Story of Man.  The house is surrounded with amazing concrete artwork; its a see-it-to-believe-it kind of place.  Alas, I was still running pretty early and the cabin was not open for a proper visit.  I must return someday. 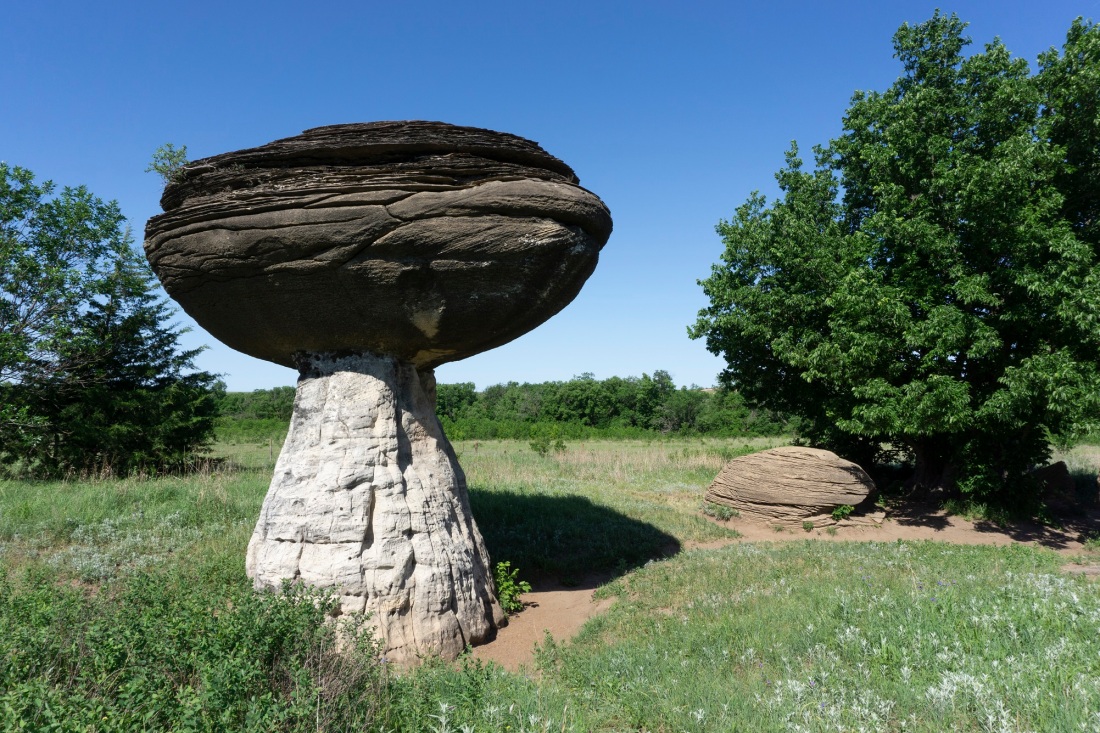 I started to think about home after I finished looking around Lucas and plotted a course to the southeast.  Of course, a straight shot was unacceptable…there was plenty to see as I headed back to Oklahoma.  I stopped for a walk at Mushroom Rock State Park, one of several natural wonders in central Kansas.  It’s the smallest state park I’ve ever heard of at 5 acres; I could walk end-to-end very easily.  The handful of significant rocks that give the park its name are unusual and magnificent. 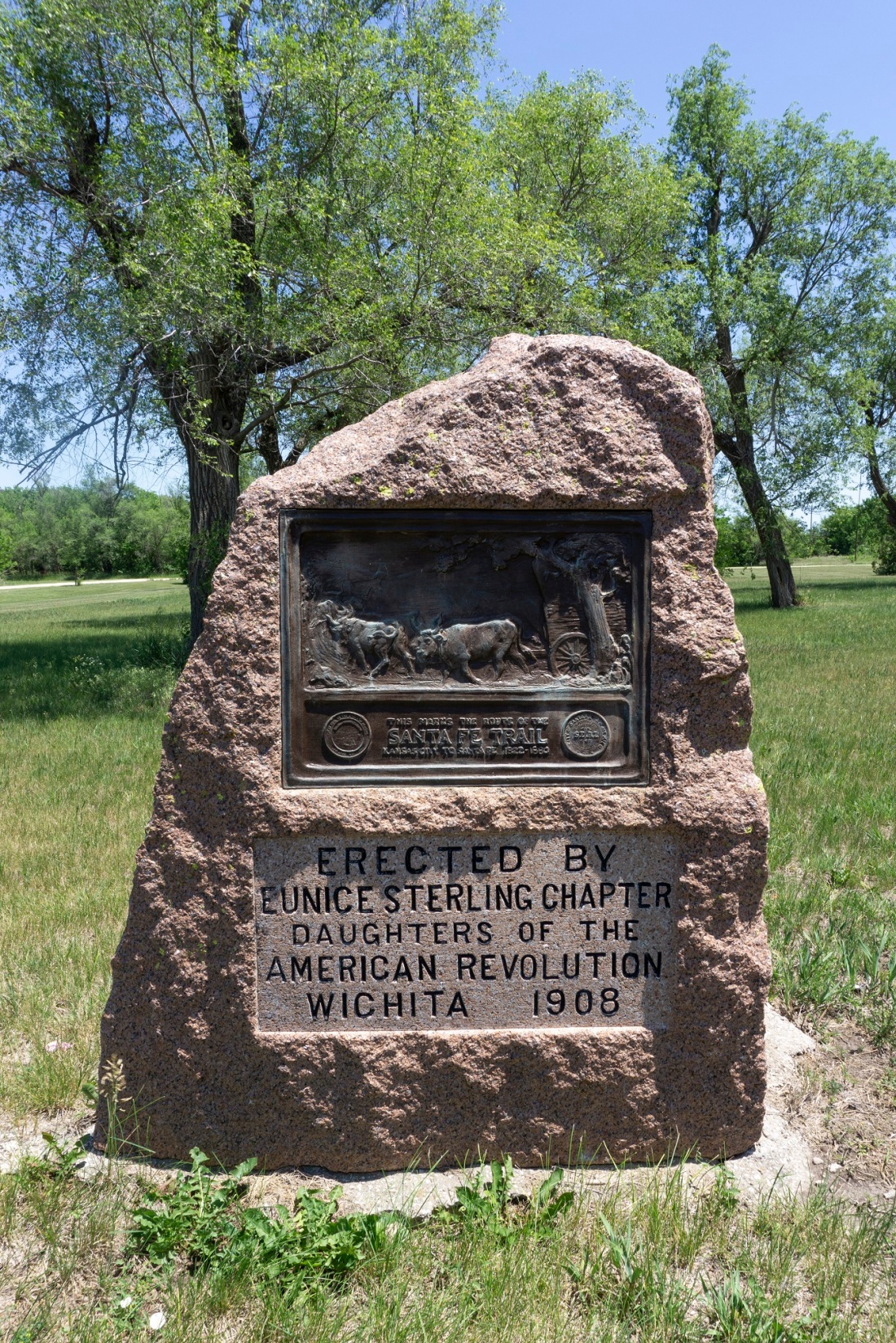 I weaved through a few more communities as morning became afternoon: Brookville, Abilene, Woodbine, Enterprise.  I stopped for a few minutes on a gravel road to watch a crop duster do his thing.  I didn’t make another proper stop until I was enticed into the town of Lost Springs thanks to a Santa Fe Trail highway sign.  Sure enough, a small stone monument stood proudly in the “city park”. I don’t think the town had a single functioning business, but there were a few abandoned buildings that were lovely to photograph. Thanks, National Historic Trail sign! 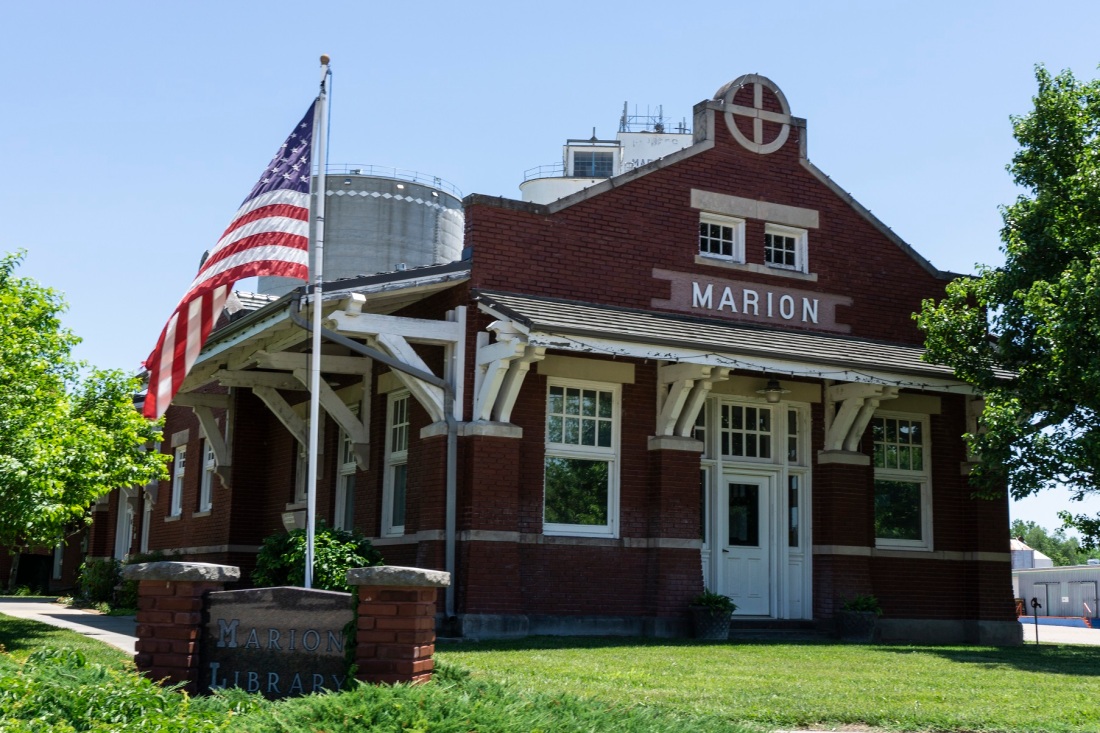 As the afternoon wore on, I became weary.  I drove through Marion & Augusta with less desire for exploration; I took some photos of neon signs and a few old buildings, but didn’t dally long.  When I entered Winfield, the town of my father’s birth, I just drove through.  I had considered taking photos of the old hospital, but it’s now part of a large correctional facility and inaccessible. Oh well. 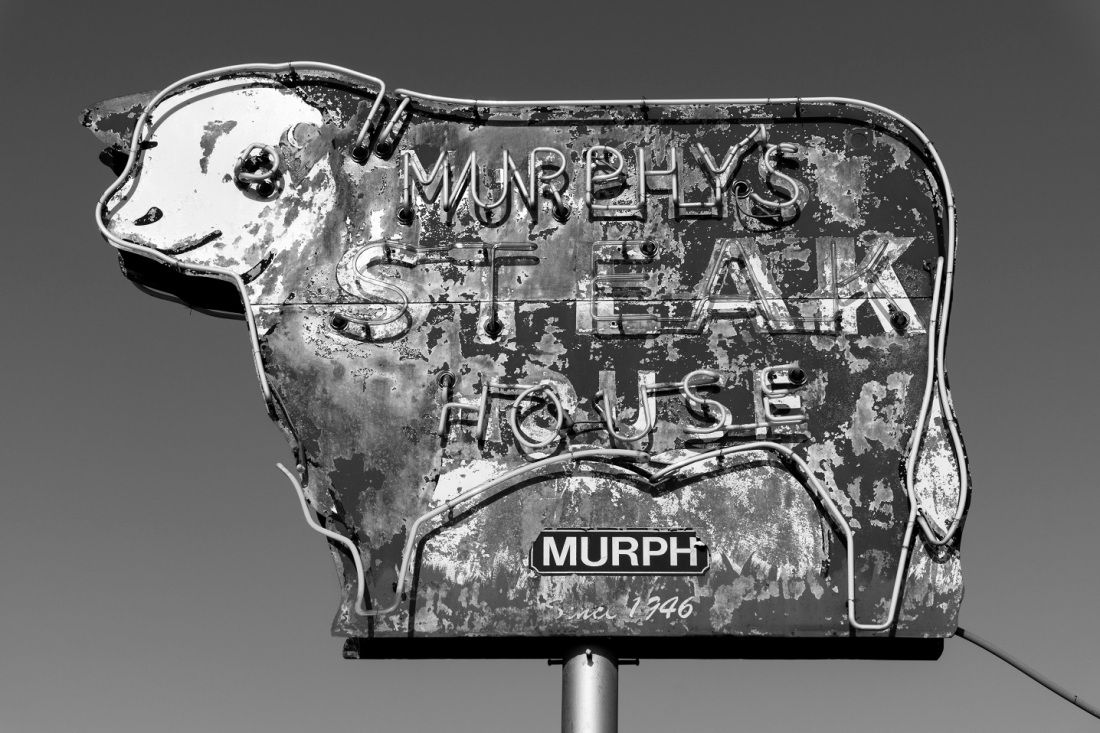 When I re-entered Oklahoma in late afternoon, I figured it would be a good idea to finally eat something. Since I’d be passing through Bartlesville anyway, I stopped in at Murphy’s for dinner.  And let me tell you, that’s never a bad idea.  GRAVY OVER ALL! By the time I got home, I was tuckered out.  It was a great weekend of new sights – I hope you enjoyed following along.