Early Thursday morning, I took Samantha to the airport so that she could spend a few days with her family back in New York.  The house is awful quiet when it’s just me, so I made plans for a little Route 66 trip with a friend on Saturday.  When those plans fell through, I decided to modify my plan and set out on my own. That’s the chain of events that lead me to spend thirteen hours in the driver’s seat on Saturday! 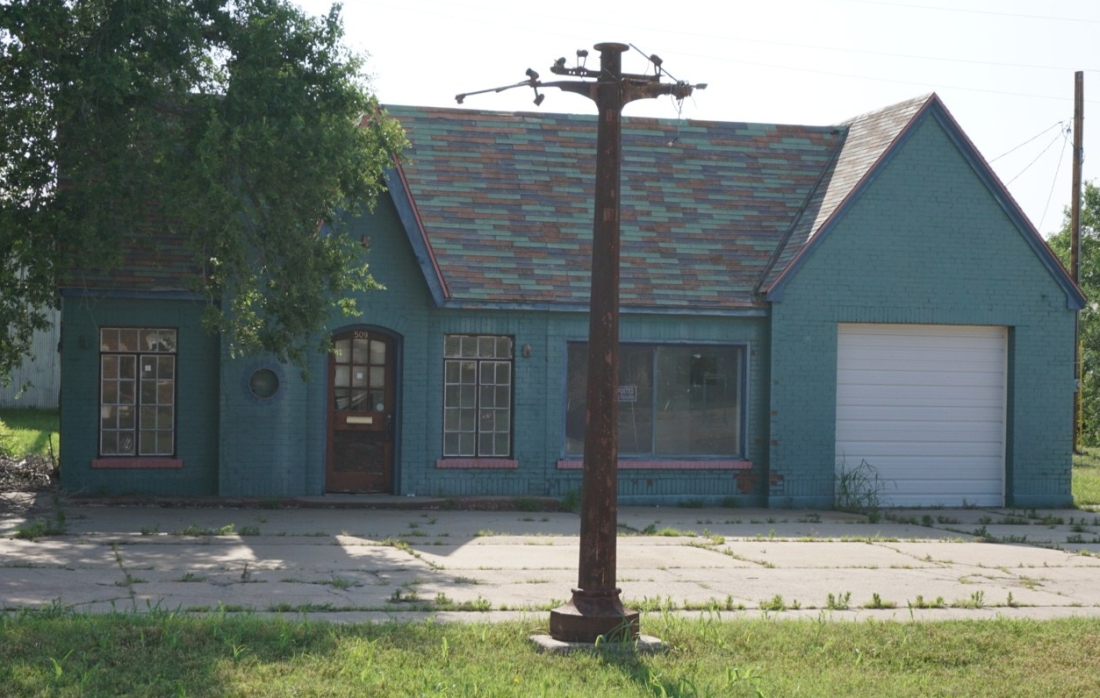 Instead of spending a day on the Mother Road as I’d originally planned, I ventured northwest into Kansas. Back in April, I learned about a few old Phillips 66 stations at the NCPTT symposium; I wanted to see them for myself. My first stop was in Wellington, where a beautifully restored station sat under a big shade tree.  Although a lot of care went into making the station look authentic, it’s currently empty.  I sure hope it gets a tenant soon so all that work doesn’t go to waste.

From the seat of Sumner County, I headed west.  I zigzagged through several small towns such as Argonia (home of Susanna Salter, the first woman Mayor in the United States), Danville, Harper, and Duquoin.

Outside of Duquoin, there’s a small Marsh Arch Bridge over Sand Creek.  The name of the tributary is appropriate, as I didn’t see any evidence of water at all. The bridge dates back to 1929 and I would be shocked if it saw even 5 vehicles a day in modern times. As such, it’s in excellent condition. I really love this bridge design and I’m glad Kansas has so many to see. 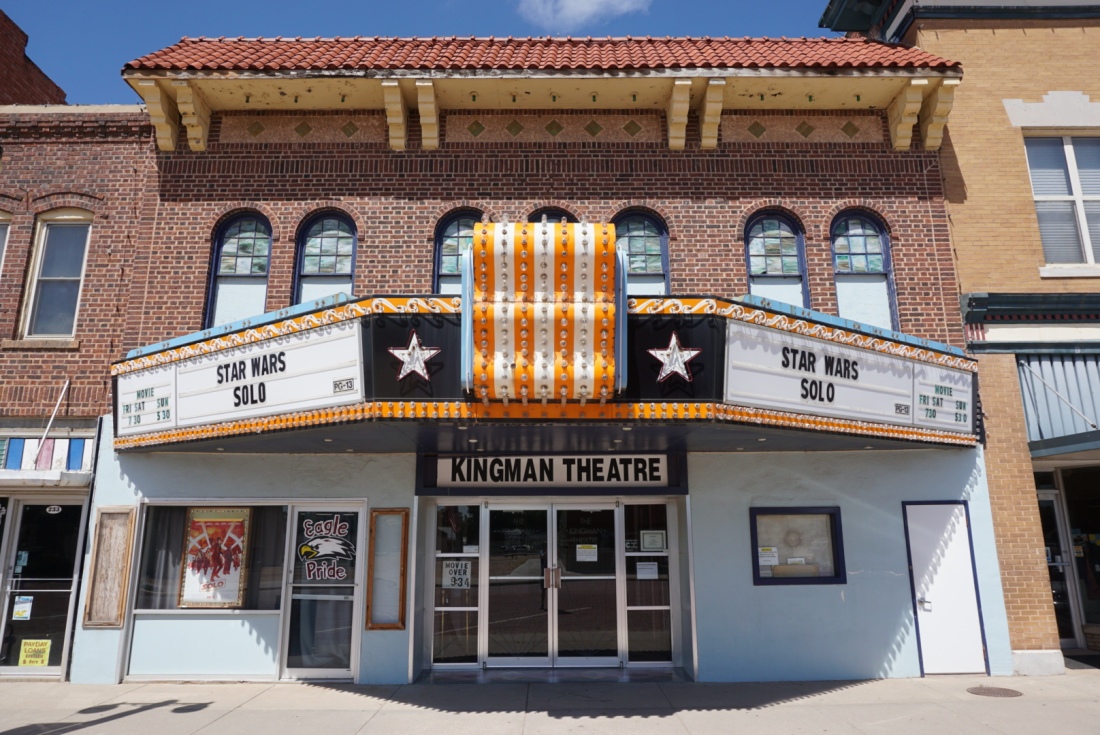 My next stop came in Kingman. I’m familiar with Kingman, Arizona but this was my first time to visit the Kansas variant. The town was named after Samuel Kingman, a former chief justice of the Kansas Supreme Court (the Route 66 Kingman gets its name from a railroad engineer.) I walked around the beautiful downtown Main Street and waved at the few pickup trucks that passed by while I snapped photos of the architecture. Of note is the historic Kingman Theater, which dates back to 1920.  I’ll have to come back at night so I can see the marquee all lit up!

By lunchtime, I had arrived in Pratt.  Not only was there another Phillips 66 station to capture, but a great sign for Donald’s Serva-Teria out on the highway. The business dates back to the 1950s and has changed owners a few times…but the Googie neon still stands proudly out front mostly intact. I don’t know if it still lights up, but I sure hope so.  Satisfied with my stops, I continued west.

I passed through several more small communities before I entered Mullinville.  It would’ve gone without mention had I not encountered a large Metal Art installation on the west edge of town.

I was shocked to see all kinds of provocative symbols and blatantly political attributions mixed in with whirligigs, windmills, and other sculptures.  It’s all the work of the late M.T. Liggett, which is a whole story on its own.  Read all about him and his work at Roadside America. It’s something else.

My next stop was out in the middle of nowhere. Since Samantha’s Nissan gets better gas mileage, I left the Mustang in Oklahoma…and boy am I glad I did. The dirt road that lead to the Mulberry Creek Bridge was carved INTO of the dadgum earth, with portions of it enclosed on both sides by walls of earth as tall as the car.  Some of the ruts would’ve surely high-centered Dad’s old two-door Ford.  With a little hopeful muttering, I made it to the abandoned bridge with no real issues.

The bridge itself has been closed since 2012.  A local landowner won a fight with the county to keep it from being demolished…but it’s still closed off to traffic. The two spans were originally part of a larger Arkansas River crossing in Dodge City and date back to 1906; they were moved out into the country in the 1950s. Today, they rust in solitude under the prairie sun, hoping to one day be of use again.

Speaking of the Dodge City, that was my next stop.  I’d planned to explore the downtown district and possibly a museum, but a huge event that had the whole area cordoned off.  It looked like a car show had just wrapped up as the roads were full of vintage automobiles literally getting the hell out of Dodge.  I opted to keep going rather than wait for the commotion to die down. I’ll just have to come back!

After Dodge City, I took another dirt road (a less treacherous one, thankfully) to visit the site that inspired me to drive to western Kansas in the first place: Monument Rocks. 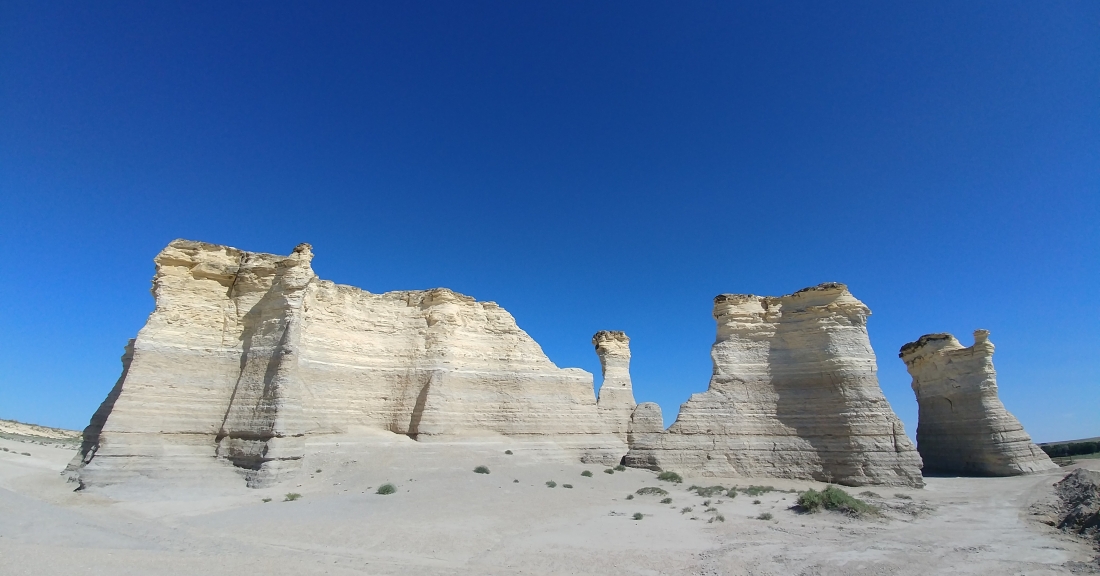 Also known as the Chalk Pyramids, these beautiful rock formations were selected as a National Natural Landmark in 1968. Although they’re on private land, the owners graciously allow visitation free of charge. When I turned the engine off and got out of the car, the world was quiet save for the breeze, my footsteps, and the click of my camera. I marveled at the 70 ft tall buttes and arches and took my time exploring.  Just south of the rocks, a small obelisk marked a stop for the Butterfield Overland Despatch, a mail and freight service from the 1860s. 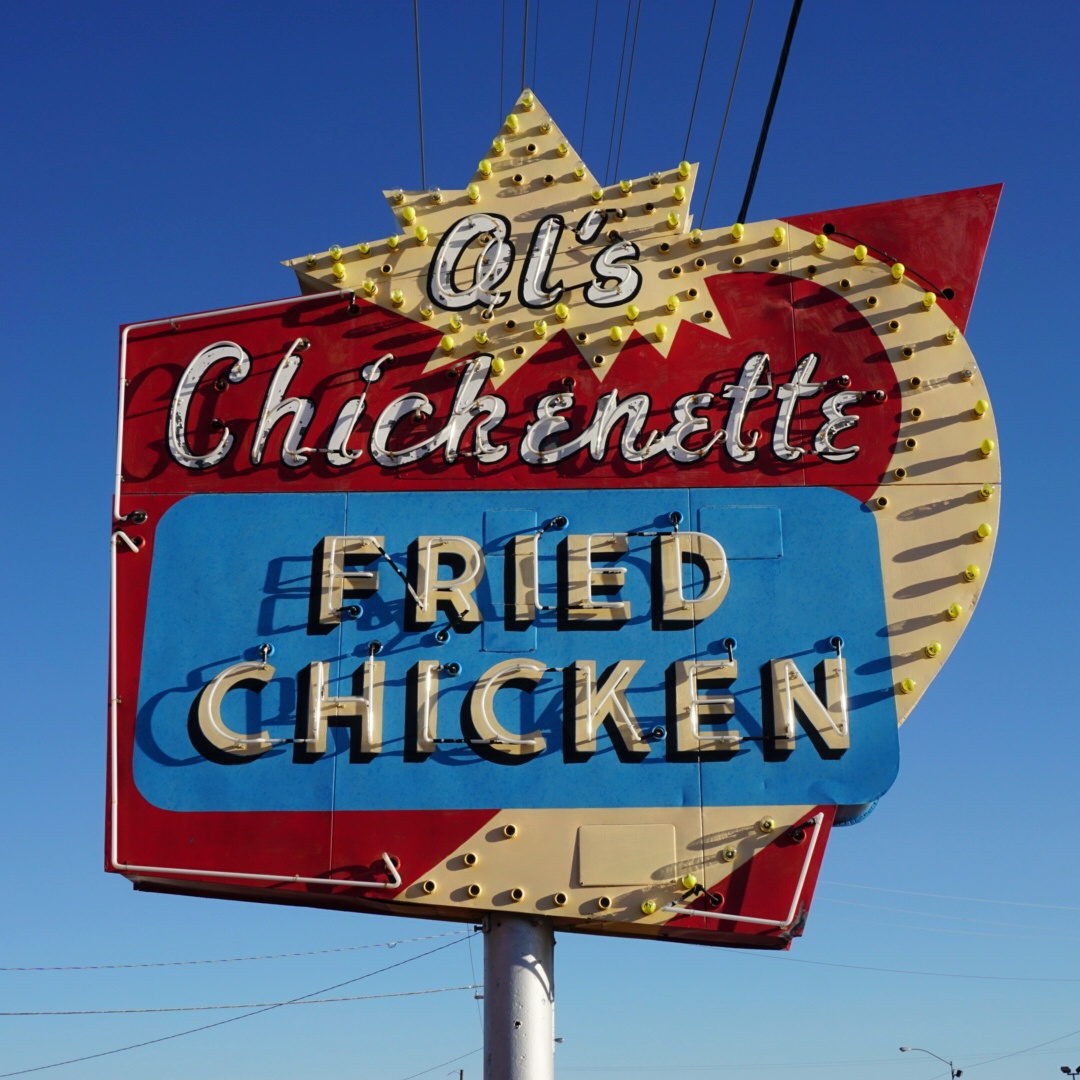 It had been a long, enjoyable day…but it wasn’t quite over.  My final stop (and where I opted to bed down for the night) was Hays, the town where ‘Buffalo’ Bill Cody earned his nickname.  I explored the charming brick streets downtown (which included one more old Phillips 66 Station) and dined at Al’s Chickenette, a roadside restaurant that would be right at home on the Main Street of America.  They, too, have a beautiful neon sign…but hail damage from a few years back has kept it dark for a while.  The waitress I spoke to was hopeful that they’d have it relit later this year. Regardless of signage, though, the food was heavenly.

As the sun set, I ambled to a local motel and stretched out.  It was a long, lovely Saturday full of exploration…with a bit more to come on Sunday as I made my way back home.