For the last several years, I’ve met up with the Gilligan’s Route 66 Tour group as they’ve come through Tulsa. Gilligan’s is operated by Sam Murray, a gent from New Zealand that also owns and operates a 1916 boutique hotel on the south island. As such, Sam’s bi-annual tours typically cater to Kiwi travelers. They fly into Chicago, rent a fleet of Mustangs, and drive Route 66 all the way to the Pacific Ocean. It’s always a treat to meet the folks making the journey with him and this year I had the pleasure of following along for a few days.

On Wednesday, I set out from Tulsa to Paris Springs, Missouri in order to rendezvous with the gang at Gary Turner’s Gay Parita station. I had time to make a short detour, so I stopped for a bit near the town of La Russell to photograph a historic bridge. The clouds were low and air was thick with moisture; it gave the secluded country road a bit of a mystical feeling. The Spring River rushed by beneath my feet as I walked the grated deck. It was just me and the tweeting birds.

I arrived in Paris Springs just after 11:00 AM, which was perfect timing – it wasn’t even ten minutes later that the first Mustang emblazoned with the Gilligan’s Tour logo arrived. Before long, the rest of the pack had surrounded the little Sinclair station. Roughly two dozen New Zealanders wandered the grounds and talked to George and Barbara, who run the station now that Gary has passed on. 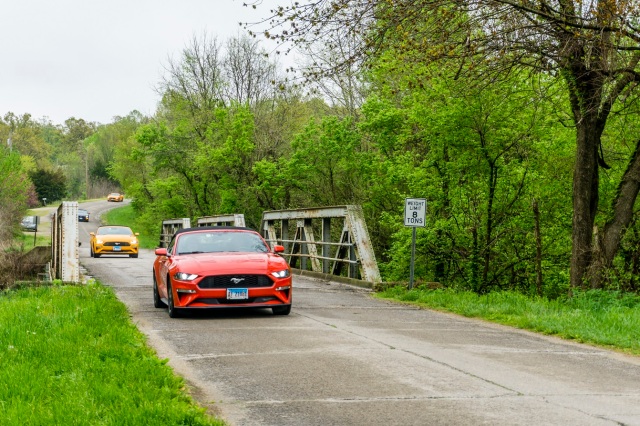 Bob “Croc” Lile and Jim Livingston (both from Amarillo, TX) were also tagging along with the tour group and working on their book project, I Am Route 66. A German couple had also come along for the trip this time around, driving one of Sam’s vintage cars…a big old boat of a Mercury. An Englishman and his daughter was also in a Gilligan’s Tour Mustang, but he was doing the self-guided version of the tour to allow for a bit more flexibility. We encountered him several times over the next two days.

After about half-an-hour of exploration, the group saddled up and continued west. The next big stop was at Red Oak II, a remarkable community outside of Carthage, MO. You could call it a ghost town, but it isn’t really – it’s the handiwork of local artist and creative spirit Lowell Davis. Lowell’s home town of Red Oak had completed faded off the map by the 1980s and Lowell decided to convert his cornfield into an homage of sorts. He bought a number of buildings from the original town (as well as other rural communities that had suffered the same fate) and moved them to his farm. So, Red Oak II is and isn’t a real ghost town. It’s unlike anything else I’ve ever experienced.

Although I’ve been to Red Oak II several times, this visit was the first time I had the honor of meeting Lowell Davis himself. He’s a real charmer with a great sense of humor and a wealth of knowledge. His passions go beyond his homemade town, however: Lowell is known worldwide for his painted art and metalwork, too. The “Norman Rockwell of Rural Art” has sculptures all around Jasper County, notably throughout nearby Carthage. Red Oak II itself is full of quirky, fun metal art and the old barn houses an art gallery of Lowell’s works. The whole place is just magical.

I left Red Oak II just a bit before everyone else so I could drop in and say hello to Debbie at the Boots Court in Carthage. We visited for a few minutes and I told her how I’d discovered that Bob Boots, son of Arthur (original owner of the motel), had been the original owner of the Boots Drive-In in Tulsa! She directed me to where I could find the late Bob Boots’ grave marker in town – it was emblazoned with images of the Boots Court and the original Boots Drive-In, also started by his father, right there in Carthage. 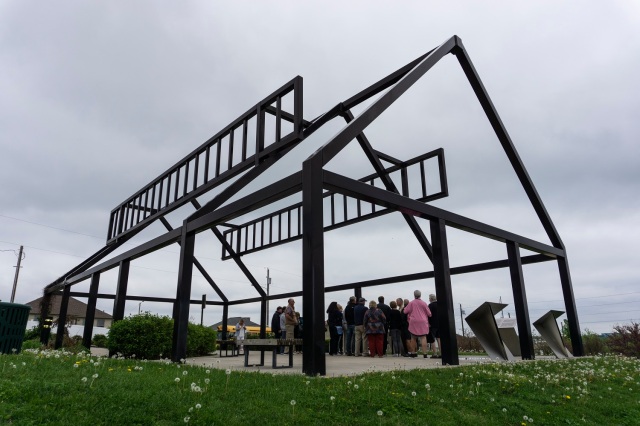 The destination that day was Joplin, Missouri. Before dinner, we were treated to a bus tour headed by Patrick Tuttle, director of the local visitor’s center. He took our group around town to show us areas impacted by the devastating 2011 tornado. The tornado was nearly a mile wide and caused enough damage to be the costliest single tornado in United States history. It also killed over 160 people. Cunningham Park has been turned into a memorial to that terrible event; there’s an interpretive plaza that overlooks the rest of the park with several “pencil sketch” outlines representing destroyed homes. The park is a beautiful tribute to all that was lost in that terrible event.

Night fell and we all dined together; I loved hearing everyone’s excitement about the things they’d seen and the people they’d met so far. Several travelers began asking me questions about Oklahoma and I, too, was excited about the things we’d be seeing together the next day. For the time being, however, we’d all earned a good night’s rest.

Rhys Martin was born in Tulsa, Oklahoma in 1981. In 2009, he sold everything he owned and left the country, living out of a backpack for ten months. He discovered a passion for photography while traveling throughout Southeast Asia and Europe. After returning home, he looked at his home town and Oklahoma heritage with fresh eyes. When he began to explore his home state, Rhys turned his attention to historic Route 66. As he became familiar with the iconic highway, he began to truly appreciate Oklahoma’s place along the Mother Road. He has traveled all 2,400 miles of Route 66, from Chicago to Los Angeles. He has also driven many miles on rural Oklahoma highways to explore the fading Main Streets of our small towns. Rhys has a desire to find and share the unique qualities of the Sooner State with the rest of the world. Cloudless Lens Photography has been featured in several publications including This Land, Route 66 Magazine, Nimrod Journal, Inbound Asia Magazine, The Oklahoman, and the Tulsa World. In 2018 he published his first book, Lost Restaurants of Tulsa. Rhys loves to connect with people and share his experiences; ask him about enjoyable day trips from Tulsa, locations along Route 66, and good diners or burger joints along the way.
View all posts by rhysfunk →
This entry was posted in Missouri, Route 66, Travel and tagged Bob Boots, Carthage, Gary's Gay Parita, Joplin, La Russell, Lowell Davis, Missouri, Mother Road, Mustang, neon, Red Oak II, road trip. Bookmark the permalink.

1 Response to Gilligan’s Spring Tour (I)