If you missed my previous post that covered the journey from Paris Springs to Joplin, Missouri — check that out here.

As I ate my breakfast and visited with my New Zealand traveling companions in Joplin, I noticed they were all wearing small red pins. At first I thought they were little guitars, but I soon realized they were poppies. I knew that poppies were a common symbol for World War I, but I didn’t quite understand the significance of wearing them on that day. I asked one of the gents sitting across from me and he told me it was ANZAC Day. 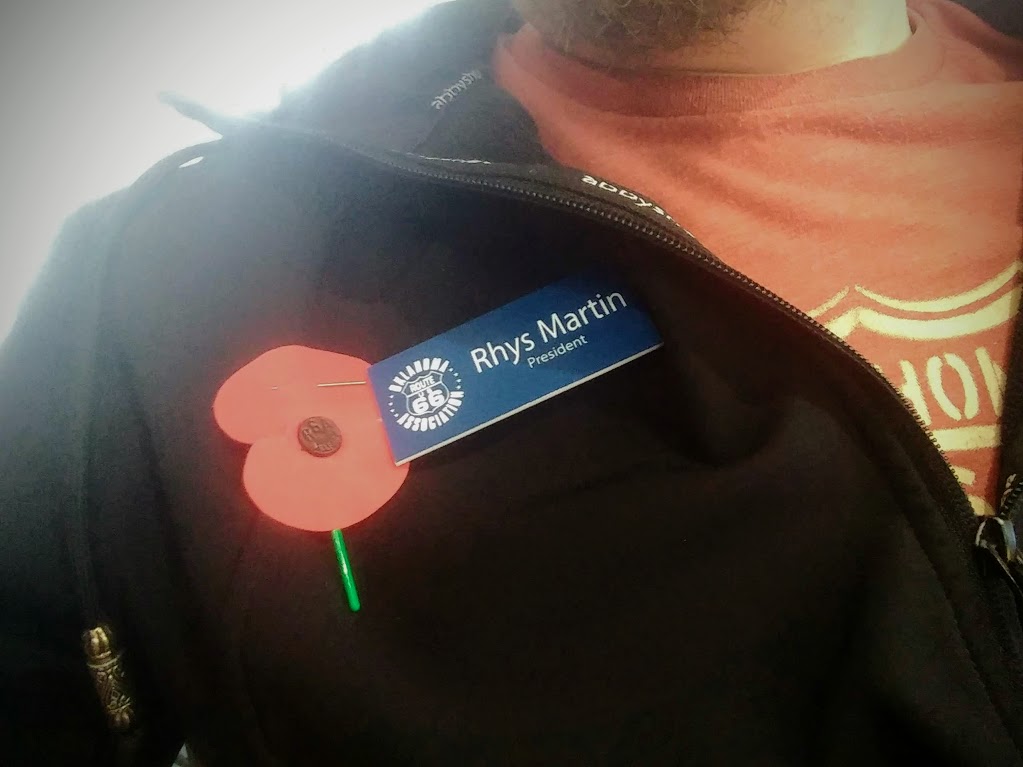 ANZAC stands for Australian and New Zealand Army Corps. The holiday and remembrance marks the anniversary of the 1915 landing by ANZAC forces at Gallipoli, the start of an eight-month campaign that marked the first major losses for the two countries in the first World War. Since that time, ANZAC Day has evolved into a day remembering losses in all wars. Before we set out for the day’s journey, everyone gathered outside for solemn remembrance punctuated by “The Last Post”.

You can read more about the traditions of ANZAC Day here.

Our first stop that morning was a delightful mural in downtown Joplin. It featured a map of Route 66 along with a fabricated half-Corvette stuck out from the wall that folks could pose around if they so desired. After a few quick pics, we continued west into Kansas and the town of Galena. The New Zealanders loved getting to pose with the collection of Pixar-esque vehicles at Cars on the Route. As everyone wandered about, several local vehicles drove past and gawked at the crowd. Several honked and waved, surely wondering how far these people had traveled to see their little corner of Kansas.

We had one more place to visit in The Sunflower State: the Brush Creek Bridge in Baxter Springs. I’ve photographed this concrete Marsh Arch bridge many times, but never with such a collection of cars on it! We were joined by Sam’s other vintage automobile, a 1966 Oldsmobile, which had broken down on the way to Chicago a few days before the tour started. Although the group boisterously encouraged me to do so, I did not scale the sides of the bridge for more photos.

Our first stop in my home state was the Dairy King in Commerce, OK. The Dairy King occupies an old Marathon service station, which originally opened in 1927. Although it has traded gasoline for burgers and ice cream, it has operated continuously for 92 years. Today it’s operated by Charles Duboise and his mother, Treva. Charles is known around the region for his knowledge of local history, which he tells with great gusto; notably the time that Bonnie and Clyde killed a local constable. Dairy King is also known for serving the “one and only” Route 66 cookie. They are pretty tasty! I’ll definitely be back when I can stay longer, I just gotta remember to bring cash. No cards or checks! 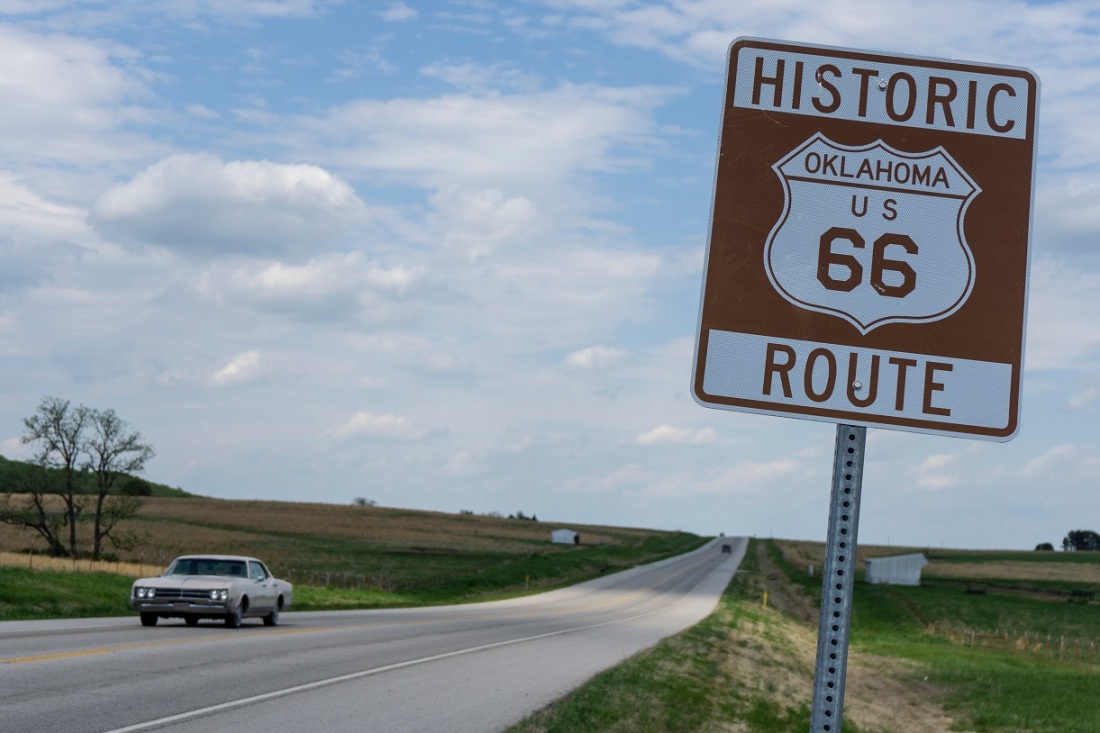 Not far down the road in Miami (pronounced My-am-uh) we made our next stop: the Coleman Theatre Beautiful. I am excited any time I step into this gorgeously-restored 1929 theater and listened intently as our group was told about the history of the Coleman, from the early Tri-State Mining days to the restoration that took place in the 1990s. The stage was being set up for a performance to take place that evening; the main set piece was a giant radio dial!

I skipped ahead past the Ribbon Road alignment to get everything set at Clanton’s Cafe, our lunch stop in Vinita. Everyone was starving by the time they arrived, which was a good thing: Clanton’s always takes good care of their guests. Sam purchased a few orders of their famous calf fries and offered them to the group before telling everyone what they actually were. To my surprise, it was mostly a non-event. It was a much bigger deal when we all surprised Sam with a piece of cake and a room full of people singing him Happy Birthday.

The rest of the journey to Tulsa was more of a free-form experience. The tour booklets and hand-programmed GPS units gave travelers the option of any-or-all of several attractions, including Totem Pole Park in Foyil, the J.M. Davis Gun Museum in Claremore, and the Blue Whale in Catoosa. I headed straight for the Blue Whale so I could chat with Linda Hobbs, who runs the gift shop. Kiwis came and went in a piecemeal fashion as I wandered around the familiar old roadside attraction and had a nice visit. 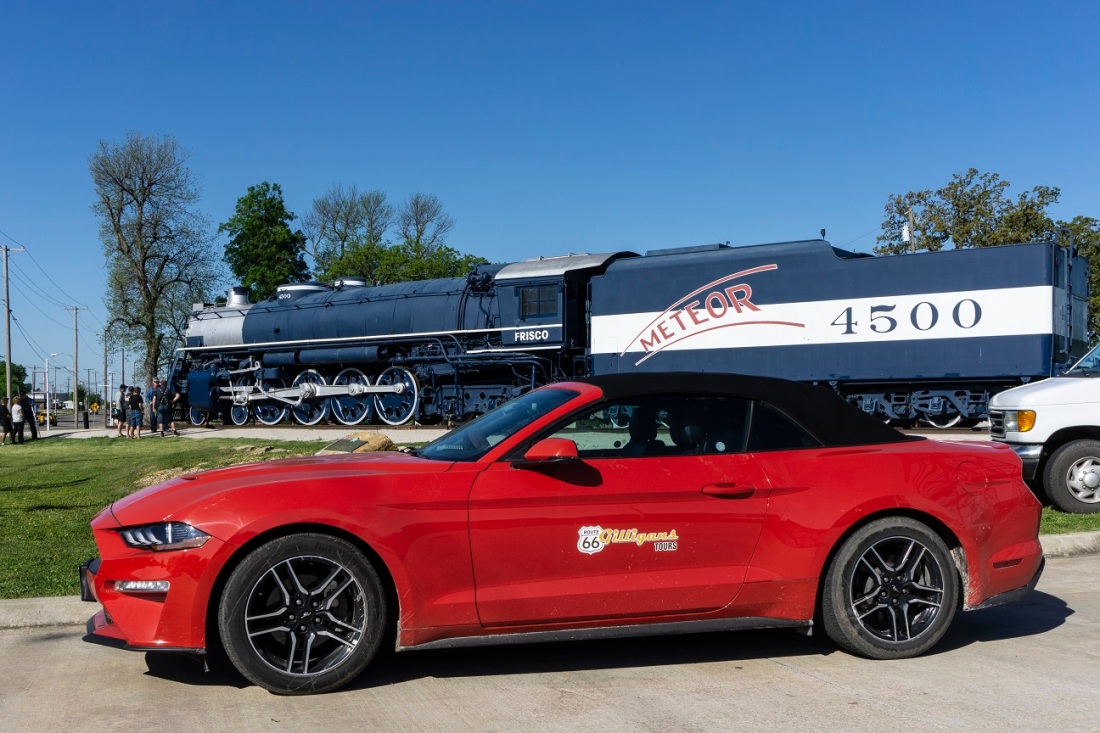 That evening, I joined the gang for a final meal together at Baxter’s Interurban, conveniently right next to their hotel. The next morning, I waved goodbye to my travel companions at Route 66 Village in west Tulsa. I headed back to work as they continued west towards Oklahoma City. It was a fun couple of days & I’m envious of their experience as they progress towards Texas and New Mexico.

It occurred to me that leading tours is something I’d like to do more of in the future. I’ll have to look into that…