When I woke up this morning, I wanted to go somewhere. I also didn’t want to go anywhere. My day-to-day has been so busy lately that I haven’t had much of an opportunity to take any road trips and I’ve been fiending for more time behind the wheel. I’m also just plain worn out…so a day on the couch sounded wonderful. It took about an hour of talking to myself before I finally decided to get out of bed and make something of the day. What better motivation is there than the promise of a delicious meal? I hadn’t been to Bartlesville in quite a while, so after I made myself presentable and got into the car I ventured north. 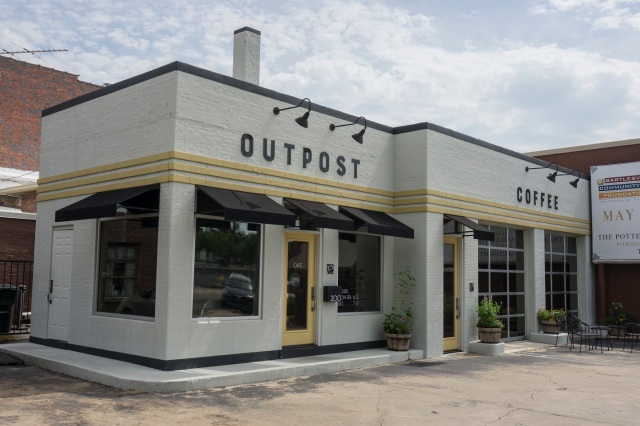 I arrived in downtown B’ville an hour later, but it wasn’t quite lunch time yet. I bought some coffee beans at Outpost Coffee, a local roaster that has restored a vintage Brilliant Bronze service station. It’s beautiful! I still had some time before lunch & wandered over to the library to look through some of their old phone directories. Yes, I did have a purpose. I don’t look through old phone books for fun.

Well, I kinda do, but, never mind that now. 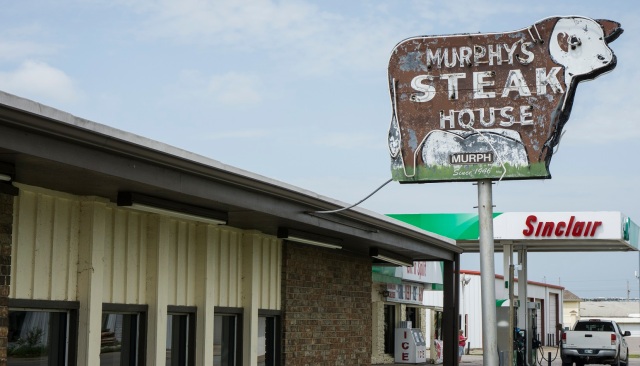 Once the clock ticked over to 11:00, I drove to my delicious destination: Murphy’s Steak House. This humble little spot on SW Frank Phillips Blvd is legendary. It was started by Melvel and Lorene Murphy in 1946; although it’s been through a fire and a tornado over the years, the food hasn’t changed a bit. The specialty of the house (and my consistent selection) is the Hot Hamburger: a patty of meat on toast, covered in fries, with brown Gravy Over All. Like all diners of its era, there’s a counter near the kitchen. Of Course that’s where I sat and enjoyed my meal.

Satisfied and (a little too) full, I re-entered the sauna of the outside world. I walked around downtown, seeking a specific address I’d found in the aforementioned phone directories. Back before Murphy’s opened their doors, there was a restaurant downtown called Eng’s Cafe. It was owned and operated by a member of the same family that ran The Mandarin Cafe from Tulsa’s past; I’d featured The Mandarin my book Lost Restaurants of Tulsa. The building that housed Eng’s Cafe still stands, and it’s actually still a restaurant: The Painted Horse Bar & Grille. I will have to see if I can find a picture of the old place. 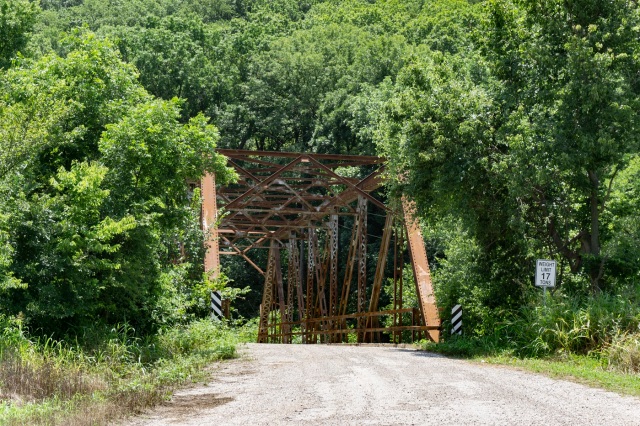 I had plenty of day left, so I opted for a little bridge-hunting. Northwest of Dewey, beyond the Caney River, is a favorite span of mine. The Mission Creek Bridge dates back to the late 1920s and looks like a portal into another world thanks to its placement at the base of a thickly-wooded hill. I could tell the area had suffered from the recent floods as the road was full of potholes and ruts. The Mustang made it fine, though, and before long I was heading back to the main highway. 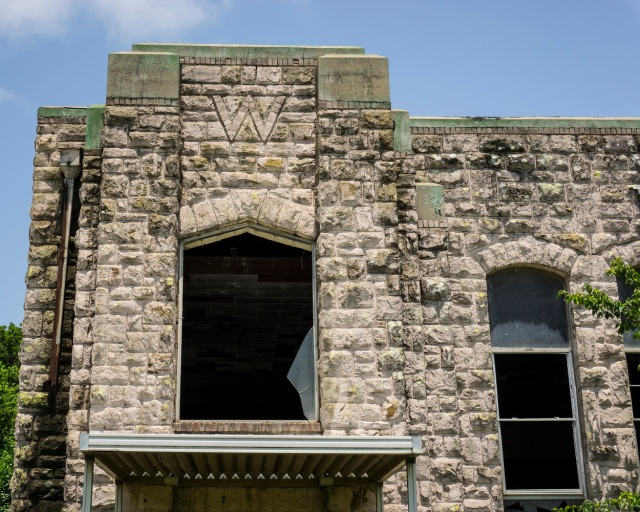 When I looked back at my map, I noticed a marker for a bridge nearby that I hadn’t yet explored. I set my GPS and went east. My path took me through Wann, technically a town but there isn’t much to it aside from a post office and a collection of houses. The remnants of a convenience store sit behind a simple roadside attraction: Six Flag Poles Over Wann America. It’s exactly what it sounds like. There was also a cool abandoned stone WPA-style building, which from what I could find used to be the school gym. 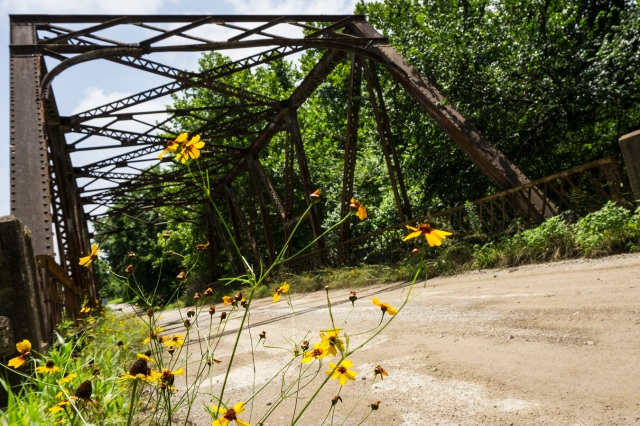 Eleven miles farther east, I made my next stop: the Hickory Creek Bridge. Although it supposedly once carried old Highway 169, it was hard to imagine serious traffic on the pitted gravel lane. I took photos for maybe five minutes before a tired green minivan approached me from the south. It came to a stop near me and a man’s voice called out: “You like old steel bridges, do ya?”

The driver’s name was Buddy. He was a sixty-year-old retired employee of the county, a learning blacksmith that also restored old cemeteries in his free time. He turned his car off and I knew we’d be chatting a while. In between spits of tobacco, we talked about the craftsmanship of steel truss bridges and he tried to think of other bridges he could point me to.

At one point, a truck came up behind him, then came alongside. “Hey, Buddy! Everything okay?” the driver asked, looking at me warily.  Everything was indeed okay, and Buddy immediately engaged his friend’s help to come up with a list of bridges. I stood there and smiled as Buddy and his friend went back-and-forth on various topics, including the fact that the road to the church Buddy attends needed to be graded in a bad way. By the time the truck driver drove off, Buddy had come up with three bridges. 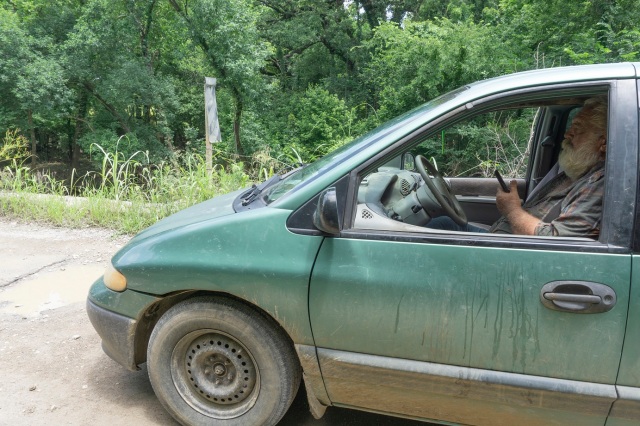 “West side of Coffeyville,” he said. “There’s a new bridge there now, but the old bridge is just sitting there. Now, go north on the main highway. Go until you get to the main drag, uh…” He thought a moment. “I think it’s 11th Street. Anyway, there’s a stoplight there. Go west. Drive until you pass the old Wal-Mart. You know where that is, don’t ya?”

“Good. Turn south the next chance ya get. It’s just sitting there next to the road.”

Buddy’s other directions were similarly colloquial, to my great delight. We shook hands, Buddy went on his way, and I headed to Coffeyville. 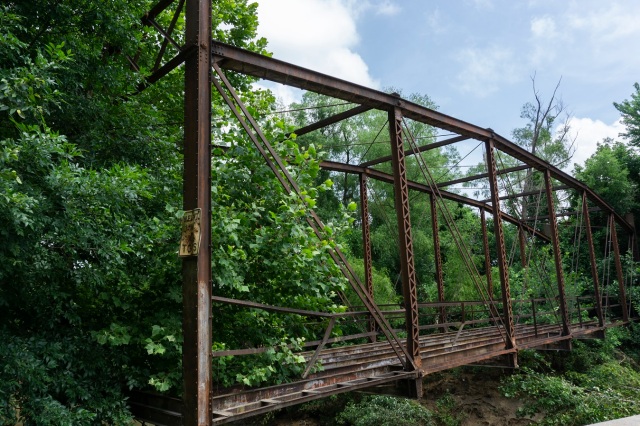 His directions were perfect! I had actually photographed the bypassed Onion Creek Bridge before, but not in the summer time. It’s a beautiful, unique bridge. Shame it’s just rusting to the side of a county road.

As I crossed back into Oklahoma, I noticed storm clouds gathering. I made my next few stops quickly; the skies opened up on me right as I got to the Winganon Space Capsule. After that, it was a straight drive home. 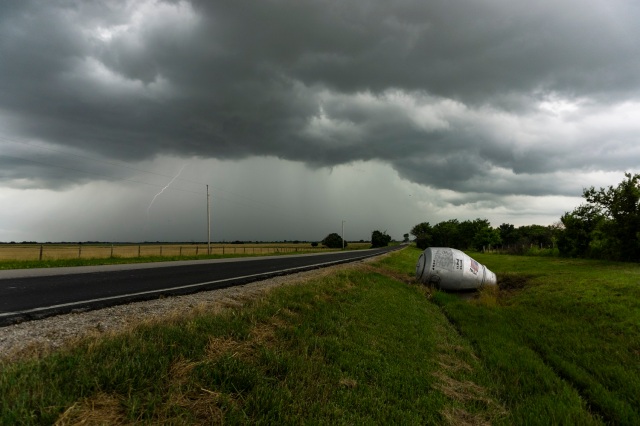 I’m so glad that I got myself out of the house today. I saw some new things, some old things, and made a new friend. I hope I run into Buddy again some day.

Rhys Martin was born in Tulsa, Oklahoma in 1981. In 2009, he sold everything he owned and left the country, living out of a backpack for ten months. He discovered a passion for photography while traveling throughout Southeast Asia and Europe. After returning home, he looked at his home town and Oklahoma heritage with fresh eyes. When he began to explore his home state, Rhys turned his attention to historic Route 66. As he became familiar with the iconic highway, he began to truly appreciate Oklahoma’s place along the Mother Road. He has traveled all 2,400 miles of Route 66, from Chicago to Los Angeles. He has also driven many miles on rural Oklahoma highways to explore the fading Main Streets of our small towns. Rhys has a desire to find and share the unique qualities of the Sooner State with the rest of the world. Cloudless Lens Photography has been featured in several publications including This Land, Route 66 Magazine, Nimrod Journal, Inbound Asia Magazine, The Oklahoman, and the Tulsa World. In 2018 he published his first book, Lost Restaurants of Tulsa. Rhys loves to connect with people and share his experiences; ask him about enjoyable day trips from Tulsa, locations along Route 66, and good diners or burger joints along the way.
View all posts by rhysfunk →
This entry was posted in Oklahoma, Travel, Uncategorized and tagged Bartlesville, bridge, bridgehunting, coffeyville, Murphy's, truss bridge, Wann, Winganon, WPA. Bookmark the permalink.

2 Responses to Bartlesville, Bridges, and Buddy