The Gamble House and Hollywood

Many people have a hard time getting to sleep in a bed that is not their own.  I don’t rightly recall if I ever had that problem, but after traveling for ten solid months I sure don’t have that problem anymore.  I slept like a rock last night.  As a matter of fact, I slept so well that I got up at like 6:30, fully rested and eager to greet the dawn.  Where did THAT come from?

Doug and I went to breakfast at a small cafe called The Coffee Cup in Long Beach.  It was a hopping little joint with amazing pancakes, homemade potatoes, and some really fantastic coffee.  Actually, there was a bit of a wait, and once you sign in you can get a cup of coffee and wait inside (or outside on the sidewalk, which we did) to get seated.  They are next door to some small local shops, and on more than one occasion I saw one of the Coffee Cup employees go inside those businesses to find patrons whose names were up but hadn’t answered their call.  I love local establishments that really care about their customers.  Great stuff.
After we ate, we drove out to Pasadena and visited a place I wanted to see last time:  The Gamble House.  Built in 1908 for David Gamble (of Proctor & Gamble) it is one of the finest examples of American architecture.  It is constructed from many various kinds of wood and with an attention to detail and craftsmanship I cannot begin to explain in this blog post.  Every room was magnificently detailed and my jaw dropped at how beautifully designed everything was.  There were many oriental influences in the design overall, and I was overjoyed to find small nuances from Japanese architecture I had already experienced.  One of the upstairs fireplaces was even designed after a Tori Gate.  It is easily the highlight of my trip so far.  In case the house looks familiar, the real reason it was so high on my list is because it is Doc Brown’s mansion in Back to the Future. 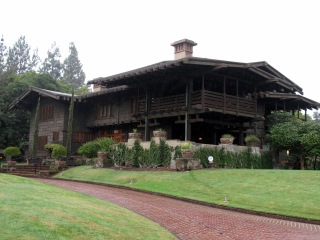 Once we wrapped up there, Doug took me on a tour of Pasadena and surrounding towns showing me some of the houses he lived in and some of the big shot mansions.  I also cannot adequately describe how enormous some of these houses were.  One of the empty lots I saw with a ‘For Sale’ sign was going for 3.5 million dollars.  I cannot wrap my mind around that much money.  It just doesn’t compute for me.  I saw the house that Doug grew up in and got a bit of a feeling for what life was like for him growing up.  It is certainly a much different existence than mine or anyone else I know.  We wandered about until we found ourselves in Hollywood.

I’ve heard all of my life that Hollywood is beaten up and downtrodden. Let me tell you this is entirely true.  There are homeless folks everywhere, and right next to closed-off streets for filming there’ll be barred businesses and shady dealings.  Even the main drag with Mann Grauman’s Chinese Theatre lacks in glamour…but that didn’t stop me from geeking out anyway.  I hopped out of the car at one point to get some shots of the theatre.  There were people milling about dressed up has stars and characters, taking pictures with tourists.  There were homeless folks asking for money.  There were locals, standing against buildings; pointing, laughing.  People with huge maps trying to find their way.  It was a sea of humanity.  Once I caught back up with the car, Doug took me around a few more places to show me the curiously morbid ‘Hollywood Forever’ cemetery, the Paramount Lot, and a few supply stores he used in his career as an art director.
We stopped unexpectedly in downtown Los Angeles for lunch.  I had been gawking at the skyscrapers and snapping pictures for such a while that I didn’t realize I was hungry…but as soon as we stopped, my stomach reminded me.  We lunched at this fantastic little hot dog place in the Art District called Wurstküche.  I had a Bockwurst and tried some curry ketchup, along with a new (to me) amber beer called Kwak, which was quite delicious.  Once I ate too much (again) we saddled up, headed back home, and I enjoyed the fact that my Dramamine was mixing with the strong beer in an interesting way.  It’s nearly 8 now, and I am going to start thinking about dinner.  After I sit here awhile longer.

Rhys Martin was born in Tulsa, Oklahoma in 1981. In 2009, he sold everything he owned and left the country, living out of a backpack for ten months. He discovered a passion for photography while traveling throughout Southeast Asia and Europe. After returning home, he looked at his home town and Oklahoma heritage with fresh eyes. When he began to explore his home state, Rhys turned his attention to historic Route 66. As he became familiar with the iconic highway, he began to truly appreciate Oklahoma’s place along the Mother Road. He has traveled all 2,400 miles of Route 66, from Chicago to Los Angeles. He has also driven many miles on rural Oklahoma highways to explore the fading Main Streets of our small towns. Rhys has a desire to find and share the unique qualities of the Sooner State with the rest of the world. Cloudless Lens Photography has been featured in several publications including This Land, Route 66 Magazine, Nimrod Journal, Inbound Asia Magazine, The Oklahoman, and the Tulsa World. In 2018 he published his first book, Lost Restaurants of Tulsa. Rhys loves to connect with people and share his experiences; ask him about enjoyable day trips from Tulsa, locations along Route 66, and good diners or burger joints along the way.
View all posts by rhysfunk →
This entry was posted in Travel and tagged California, Chinese Theater, Gamble House, Hollywood, Signal Hill, travel. Bookmark the permalink.