This last week was full of activity.  Most of it wasn’t particularly planned, either.  It’s amazing the kind of trouble you can get up to when you leave yourself open to new possibilities.

Wednesday was a big day.  It was the six year anniversary of my father’s passing, so I took the day off work.  I also had a mid-day presentation at the Central Library in Tulsa, something I’ve been planning for weeks.  The Tulsa City-County Library has an annual series of presentations called ‘Travels with Tulsans‘ and I’d been invited to kick off the 2017 season with a talk about my travels along Route 66.  My wife and mother beamed proudly from the crowd of about 50 as I showed photographs and talked about my experiences on the Mother Road.  I ran over my 45 minute time allotment a little, but when I finished I received a hearty applause from friends and strangers alike.  A few folks even came up to me afterwards to tell me about their Route 66 experiences, which is what it’s all about.  I recorded the whole thing at home afterwards, which is linked at the end of this post.  I’ve already had a few folks approach me about giving it again elsewhere; that’s an exciting prospect!

Once everything wrapped up at the library, I picked my brother Tyler up from his house and we headed to Pawhuska.  Considering the anniversary, I wanted to spend some time with him and visit Dad’s hometown together.  It was a good drive through Osage County, full of memories and laughter.  When we pulled into the cemetery, those memories came with tears instead.  Recovery took place at The Mercantile, the Pioneer Woman’s restaurant/shop that I wrote about here.  The food was just what we needed:  hearty, delicious, and reminiscent of time long past.  On the way out, I picked up a bag of coffee to enjoy on my own time back home.

That coffee was the only thing I planned to enjoy during the weekend.  Friday evening, though, other plans began to take shape.  My best friends Kristi and Maggie reached out to see if Samantha and I would join them at the Women’s March in Oklahoma City.  Although Sam and I had talked a bit about potentially going, we hadn’t really planned on it until they asked.  So, early Saturday morning, my coffee went unmade and we hit the interstate, bound for the state capital. 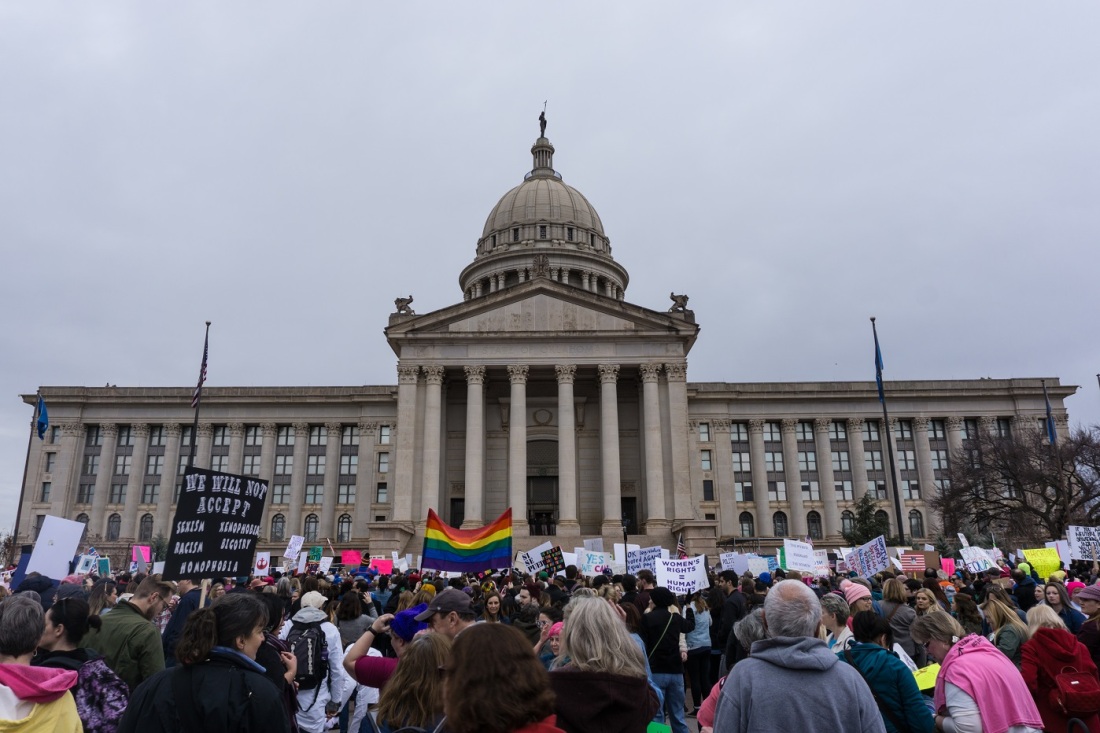 By the time we saw the Capitol Building in person, it was 9:45 AM.  The overcast skies threatened rain but the crowd was huge!  By the time the invocations began at 10:30, there were about 12,000 fellow Okies listening intently.  Several faith leaders presented prayers and messages of encouragement before the crowd took a walk down Lincoln Boulevard, chanting and holding signs.  Everything was very peaceful; the message was one of equality, human rights, and community activism.  The march in Oklahoma City was a sister march in support of the larger march in Washington DC; in fact, there were hundreds of sister marches in cities around the country and around the world.  I’d never participated in something of that scale before.  You can see all the photos I captured of the march here.

That wasn’t the end of the weekend, though.  Sunday morning was a peaceful affair and I finally got to enjoy that delicious Pioneer Woman coffee. Raindrops tapped on the windows and covered the streets as I set out once more, this time for Chandler and the quarterly meeting of the Oklahoma Route 66 Association. I drove Route 66 all the way from Tulsa, appropriately enjoying the old familiar road and clearing skies.  I arrived with a notebook in hand, prepared to takes notes so that I could report anything of note back to the Tulsa Route 66 Commission.  No sooner had I put my notebook on the table than the President of the association approached me.  The position of Tulsa County Representative was up for election and he asked if I would be interested.  A few minutes later, a motion was carried that made me a bonafide representative in Oklahoma’s Historic Association.

At that meeting, another conversation took place that brought the week full circle.  A man I’d met in Missouri last year, Michael Jones, was present. He’s been working on opening a vintage memorabilia shop on the route in Sapulpa.  He shook my hand said something that made my heart skip: “I knew your father.”  It turns out that Michael Jones had seen a photo I’d posted of Dad and something clicked.  He had worked with Dad back in the Price Mart days, calling on him as a representative from several grocery companies like Carnation and Hershey.  “He was tough, but you knew where you stood with him,” he said with a smile.  I smiled back with great pride.  We talked for a few minutes about the Food Show events we both attended in Springfield, Missouri decades ago.  We may have even met each other back in those days.  Everything was different now, sure, but we are all a sum of the actions that came before.  What a lovely coincidence!

It’s a small world when you get down to it.  Do what you can to make your world one worth living in.  Now, as promised, the video version of my Route 66 presentation.  Enjoy!