Our last day in St Louis served as a bridge between the Route 66 world that Michael Wallis is so associated with and the western history that serves as the backbone of his literary output.  It included a literal bridge, too, as it happens.

During the downtime I had on Sunday, I’d made a startling discovery.  The Route 66 Association of Illinois was wrapping up their 2017 Motor Cruise in St. Louis with a rare opportunity to cross the Chain of Rocks Bridge.  And it was the NEXT DAY!  I was ecstatic; even though Michael could not attend due to a phone interview with National Geographic, he encouraged me to go.  I did not hesitate. 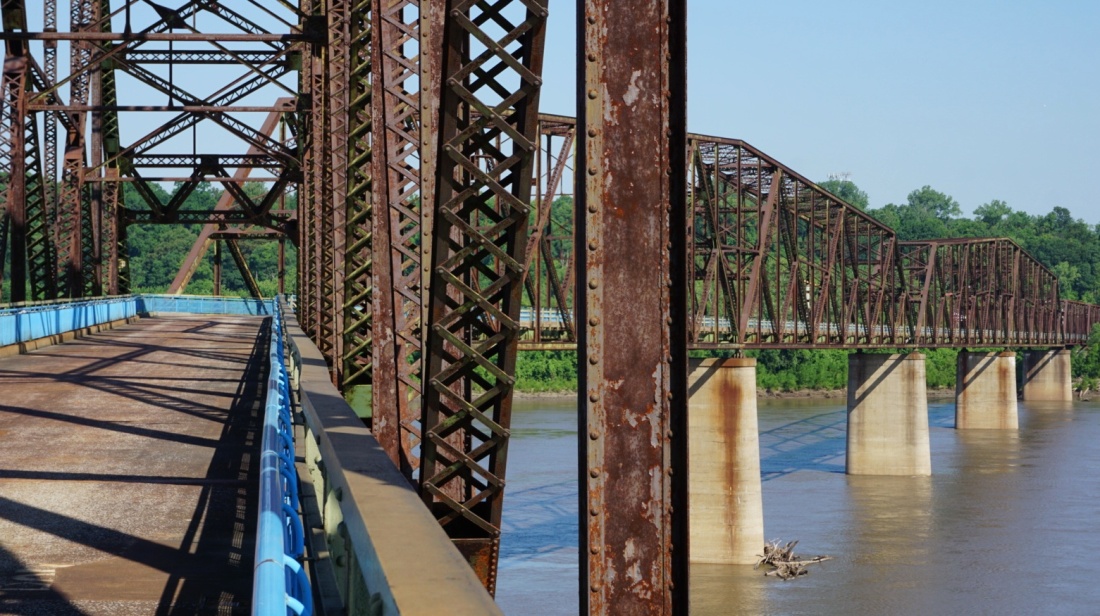 The Chain of Rocks bridge opened to traffic in July 1929, carrying Route 66 traffic between Illinois and Missouri.  Due to issues with the Mississippi River bedrock and riverboat navigation, it was designed with a 30 degree bend in the middle.  The mile-long span once had an amusement park on the Missouri side, too, but it was gone by the time the new I-270 bridge was built in the late sixties.  CoR deteriorated in the shadow of the Interstate, “too expensive to tear down”.  It was used as a filming location for the dystopian 1981 John Carpenter film ‘Escape from New York’ and the site of two horrific murders a decade later.   In the late 90s, the bridge was restored and turned into one of the longest pedestrian/bike crossings in the world.  It never re-opened to vehicular traffic aside from special occasions.

I pulled up to the Illinois side of the bridge just after 8:30, a full two hours before the designated time of crossing.  I was fifth in line behind some beautiful Corvettes!  I talked a bit with the other drivers and members of the Illinois Route 66 Association before I went for a stroll.  It took me about an hour to walk across the bridge and back, all the while snapping pics of the rusted girders in the morning sun.  It’s such a beautiful bridge; even though I’d crossed it with Samantha back in 2014 (one of my first Route 66 excursions) it was no less amazing years later. 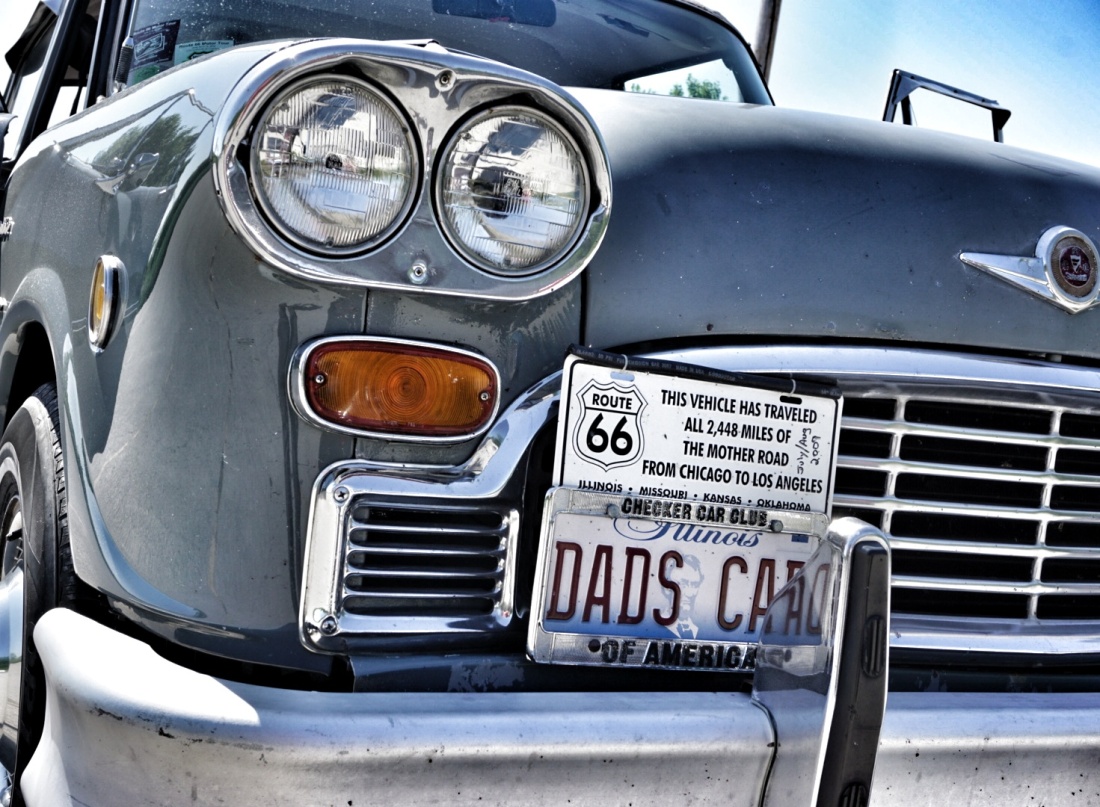 By the time I returned to the starting point, several of my roadie friends had arrived.  We had a good chat until go-time. The line of cars to make the crossing stretched back beyond my sight.  There was a mix of new and old vehicles, my favorite being a great old Checker Marathon — it even had extra fold-out seats in the back!  I’d never seen such a thing; look at this: 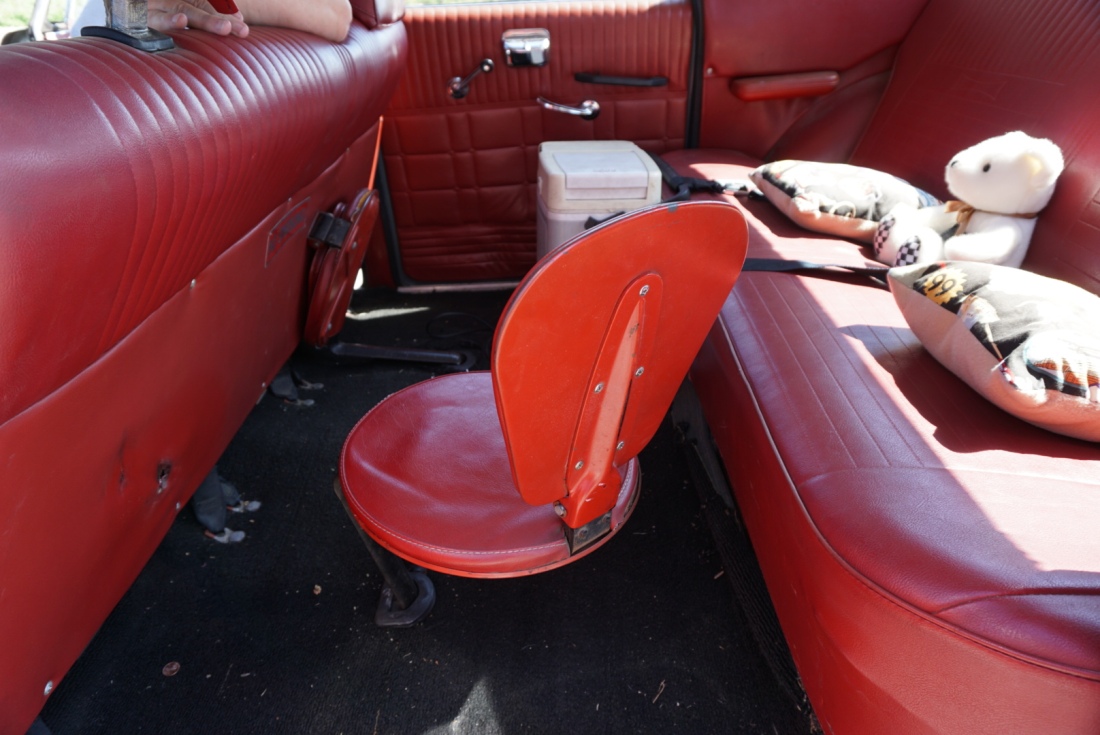 I’d tell you all about the experience of driving across the historic bridge, but, why don’t you see it for yourself:

What an experience!  By the time I returned to the Union Station Hotel, Michael had wrapped his phone interview with National Geographic.  He was greatly interested in my experience and I told him all about it.  For the rest of the afternoon, we did prep work for the big Tuesday events in Springfield IL and got ready for the night’s event at Left Bank Books in St Louis. 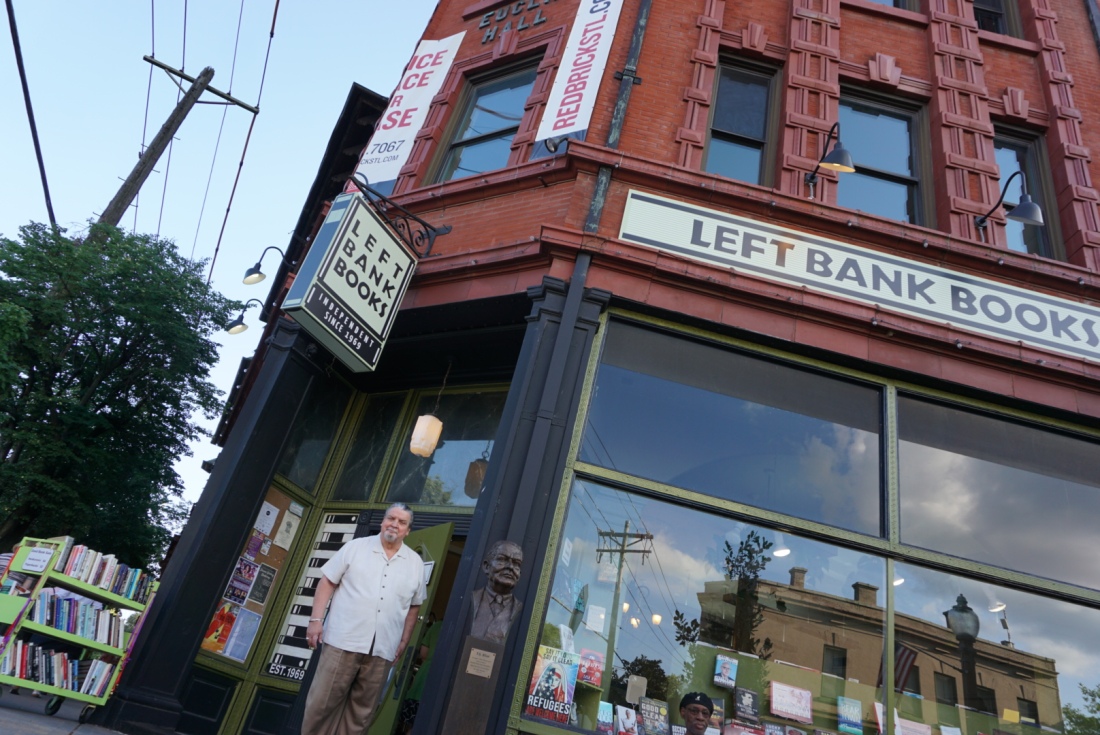 The little district that contains Left Bank, called the Central West End, is lovely.  Lots of little boutiques and trendy local places.  The bookstore is the oldest and largest independent bookstore in the city, they’ve been slinging volumes since 1969.  When we walked inside that evening for the event, I immediately felt at home.  The shop cat even came up to welcome me.  The event itself went very well; the staff were very excited that Michael was there and their presentation room was packed.  Among the crowd were a few familiar faces from days past in the city.  At the book signing afterwards, a woman walked up and told us she was a direct descendant of the Donner family; it meant a lot to her that the book was so well-researched and presented the REAL story about her family.  It was very touching.  Michael also lit up when a young Route 66 fan came up and wanted to meet the Sheriff. 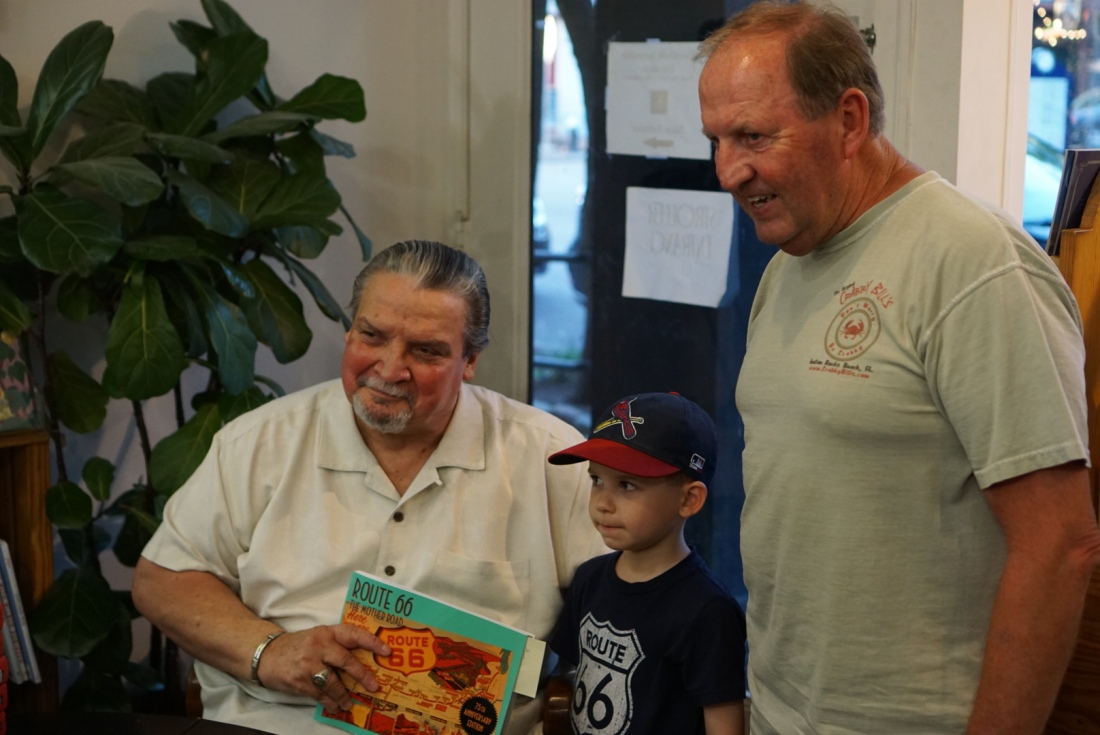 We grabbed a bite to eat nearby and talked a little about our plans for the next day.  On the way back to the car, we stopped into Jeni’s Splendid Ice Creams.  Holy smokes!  I had a scoop of dark chocolate ice cream I won’t be forgetting in a hurry.  IT WAS SO GOOD!  If you’re still in the mood for sweets after a visit to Ted Drewes, you gotta hoof it over to the Central West End.  I was amazed!

It was late by the time we re-entered the Grand Hall of the Union Station Hotel.  Michael and I parted ways & agreed to an early start for Tuesday, our final full day on the road before I headed back to Tulsa.  The day would consist of a 2:00 PM press conference at the site the Donner Party left home in Springfield IL, an in-studio radio interview, and a big evening event at the Wyndham.  We were both excited to wrap up our time together at the place where it all began for those families seeking fortune and adventure.

One thought on “On the Road with Michael – St Louis III”