During the research of my Lost Restaurants of Tulsa book, I came across a lot of information for long-time Tulsa restaurants that were still up and running. Since I couldn’t sample the food at any of the restaurants I was writing about, I made a commitment to dine at the city’s traditional diners that were still going strong. Today I made good on one: Nelson’s Buffeteria.

Nelson’s was started by Nelson Rogers, Sr. in 1929. Back then, Tulsa had a series of buffet/cafeteria operations that served the masses in a simple way. Nelson’s sat on 4th Street just east of Boulder.  After twenty years, they moved to 5th and Boston.  It was a staple of downtown dining until it closed in 2004. All of Tulsa’s classic cafeterias, buffets, and buffeterias became relegated to the pages of history…except for Nelson’s, which the family resurrected a few years later.

In 2009, one of Nelson’s grandsons opened Nelson’s Ranch House on Third Street (now closed) and in 2012 other members of the Rogers family opened a location at 44th and Memorial. The latter restaurant boasted a beautiful neon sign, which had graced the downtown location for many years before being restored.

The Nelson’s on Memorial is only open for breakfast/lunch Monday through Friday; every time I thought about having a meal there, they weren’t open. Finally, though, I arrived during business hours.  The neon welcomed me under foreboding skies as I walked through the front door.  Immediately, I was greeted with the soothing sound of bluegrass music, courtesy of a four-piece band just inside the doorway. 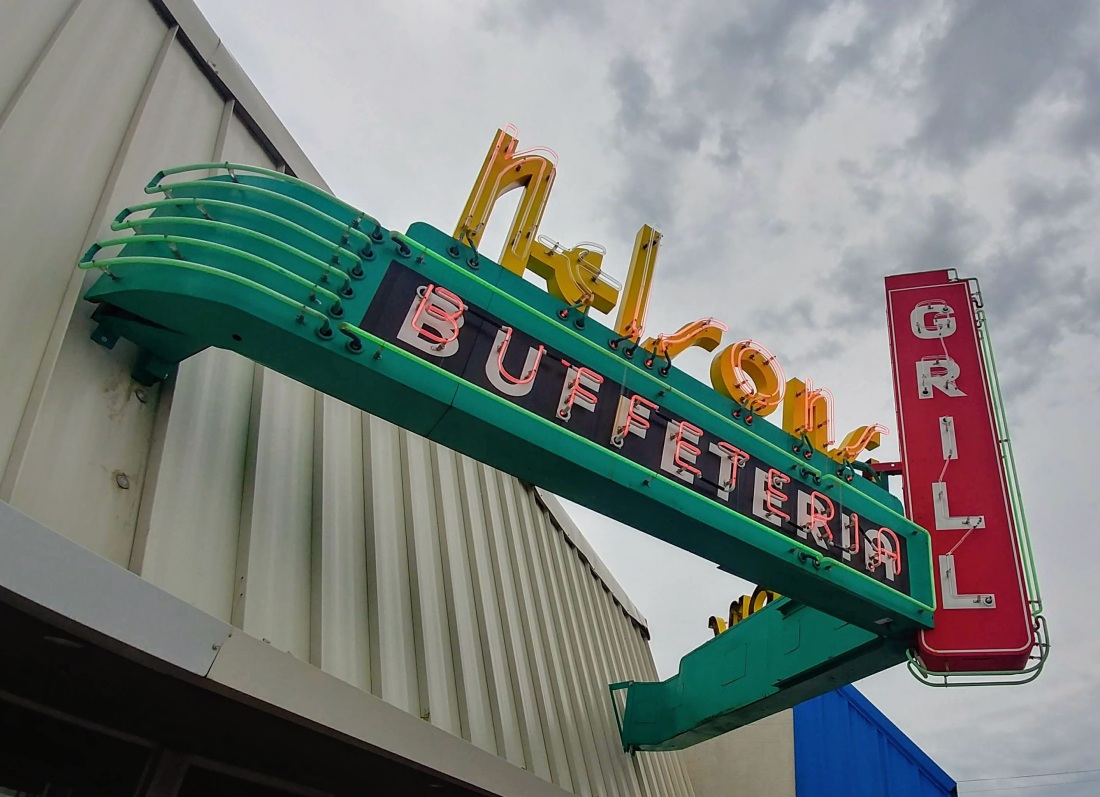 A line of customers drew my eyes to the back, where several old timers served traditional favorites from a short buffet table.  The choices are limited compared to the massive menus of today’s traditional restaurants, but what they did offer looked tremendous. Nelson’s also offers a regular rotating daily dish and a blue plate special. I opted for their most famous dish: chicken fried steak.  “Hello, Chicken Fry!” the server announced as he dressed my plate with a battered steak alongside a generous portion of mashed potatoes and gravy. I took my entree (and a side plate with a giant roll) and found a seat among the regulars, most of which were several decades older than me.

The CFS was unbelievable.  I’ve long said that Clanton’s in Vinita, OK is the best chicken fried steak in the state, but Nelson’s gives it a real run for its money.  It’s pan-fried, not deep fried, and the meat was so very tender.  The mashed potatoes were like eating a cloud.  And the roll was perfection. I inhaled my lunch with great pleasure as the band played, making me feel like I’d taken a road trip to a small rural community. The staff was all super friendly and attentive, too. Since I had to go back to work afterwards, I opted not to get a slice of pie…but I already regret missing out.

The food, the music, the atmosphere…it’s timeless.  It was like stepping back in time to the places I’ve been learning about over the past year-and-a-half. If you’re a fan of comfort food and find yourself in the area while they’re open, I heartily recommend Nelson’s.