I came across an old Tulsa World article in the archives at the library recently. It was written a few months after Route 66 was federally de-certified and I found it quite interesting.  I have transcribed it below (exactly as written) with the photos from the article.  I’ll chime in a bit at the end.

Like a meandering stream, U.S. 66 wandered 2,000 miles from Chicago to Santa Monica, Calif., crossing eight states.  Right in the middle of it was Tulsa, and many weary travelers stopped here to get their kicks on Route 66.

U.S. 66 dates back to 1926, and was the path for cross-country adventure for daring drivers of Tin Lizzies.  U.S. 66 had been in existence for years when Henry Ford started producing the Model-A, and gasoline was hand-pumped into cars that still had running boards, rumble seats and transmissions that didn’t know how to shift for themselves.

Like trees and vegetation hugging the banks of a stream, thousands of businesses spring up along the highway. The steady stream of traffic nourished diners, gas stations, hotels, garages and “tourist courts” as motels were called in the Depression years. 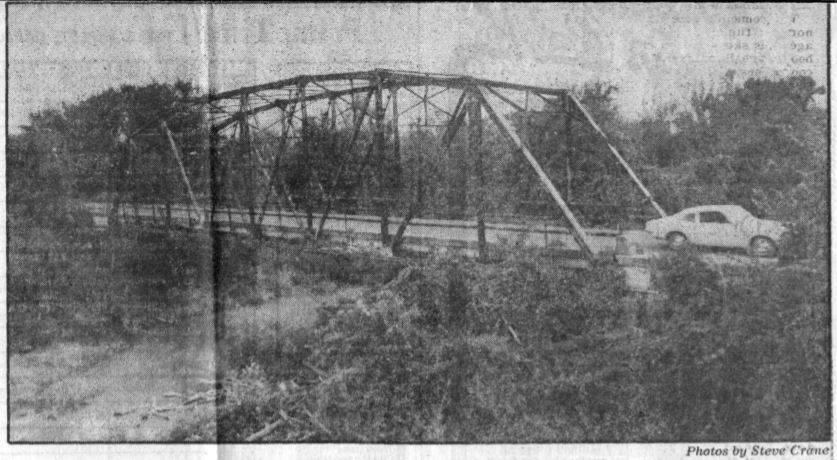 In June of this year, the American Association of State Highway and Transportation officials voted to strip the trafficway of its “U.S.” designation and it became simply Highway 66. A victim of the interstate system, it had been replaced largely by I-40.

The 59-year-old highway still generates memories for motorists who traveled it in its early years: the aroma of frying hamburgers at a roadside stand, the dark, coolness of beer taverns, the mustiness of hotel rooms with evaporative coolers instead of air-conditions, cafe nickelodeons with faces swirling a rainbow of lights and ice cream parlors with marble-top tables and creaking ceiling fans.

Less romantic was the washboard surface of the highway that made it almost impossible for drivers to go to sleep at the steering wheel. As cars bumped along, they seemed to travel almost as far from side to side as they did forward.

In Tulsa, U.S. 66 cut a swath down 11th Street and Southwest Boulevard in its 396-mile Oklahoma journey.  The Oklahoma leg has been the subject of an intensive research project by Oklahoma State University historians who have submitted a list of 33 structures as nominations to the National Register of Historic Places.

A former auto dealership, now the Claremore Tire Co. at 625 W. Will Rogers, Claremore, and the Rock Creek Bridge west of Sapulpa, are also on the list.

Stout said the work allowed him to make a nostalgic study of the buildings “that represent the beginning of Americans becoming a mobile society – when they started traveling cross-country by car.

“Life was a lot less complicated then – there were no nuclear bombs, for instance – and it represents a period that we don’t want to lose. The roads were narrow and abominable, but they also had Burma Shave signs,” Stout commented.

The survey was financed by a historic preservation grant of about $120,000. Stout said he did not know how long it would take the National Register of Historic Places to respond to the list of nominations.

Reading this in 2018 is a mixed bag of emotion.  This was written before any historic associations were formed and nobody really knew what a movement Route 66 tourism would become. It makes my heart happy to know that so many people have a strong, positive connection to the Mother Road today. But there’s also a sadness in how much we’ve lost.

The sites mentioned in Tulsa that were submitted to the National Register are also a mixed bag today:

The Claremore site (Claremore Tire Co) has also been demolished but the Rock Creek Bridge has been saved.  I certainly hope that the current federal legislation marking Route 66 as a National Historic Trail passes and the efforts of preservationists continue to bring awareness to the roadside inventory along the Main Street of America.

One thought on “Along Route 66”